Introduced by the late Chris Wills

Nevil Shute Norway was a prominent Author of many best selling books including amongst other favourites, “A Town Like Alice”. He teamed up with Alfred Hessell Tiltman (an ex-chief designer to the Airship Guarantee Co., during the construction of R.100 Airship.), Sir Alan Cobham and Lord Grimthorpe to form a new aeroplane company with the name of Airspeed Ltd. The factory was to be based in Picadilly, York and the company was officially registered on the 13th March 1931. 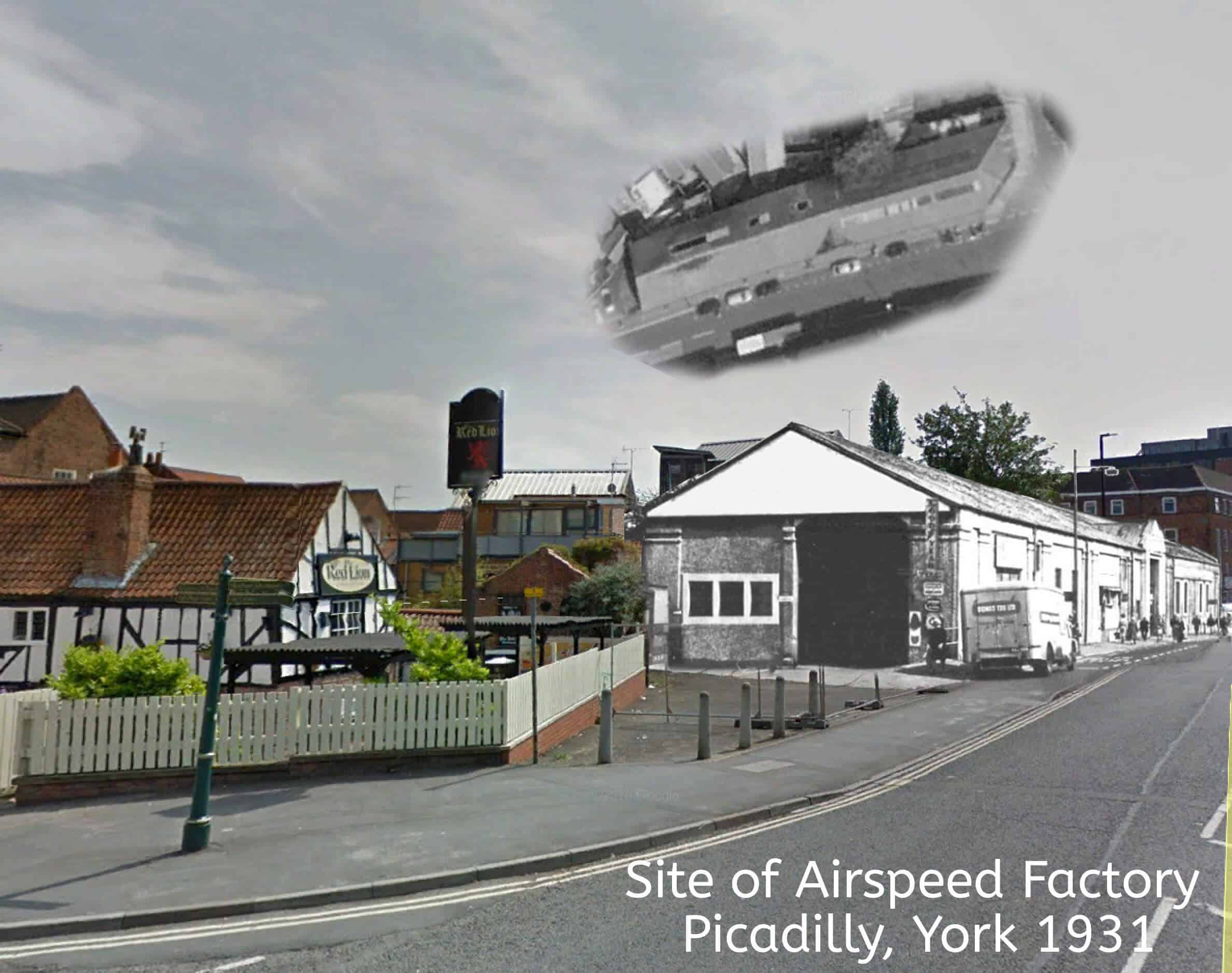 Tiltman and Norway had originally decided to try to form the company because they believed that there was a market for a “different” light aircraft and had gone quite a long way in the work of designing a high wing three-seater cabin machine, but such an aircraft was too ambitious a project for the limited means and capabilities of the company at this stage. However, with the increased interest in gliding in Britain, the management of Airspeed believed that a British gliders would be able to compete against the Germans by having same degree of aerodynamic cleanness as its excellent German contemporaries, but to be far more readily assembled from the completely dismantled condition. Airspeed estimated that the prospective market could be 40 gliders at a price of £110 – £125 each. This first production aircraft had the production number A.S. 1 and given the name TERN and was designed by A.H. Tiltman. With this glider, Airspeed hoped to capitalise on the increasing interest in gliding in the UK and with it’s sleek design, hoped to take on the domination of the German gliders. 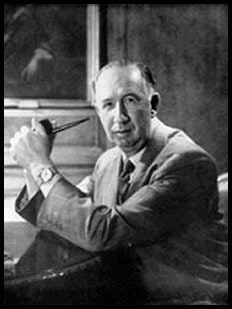 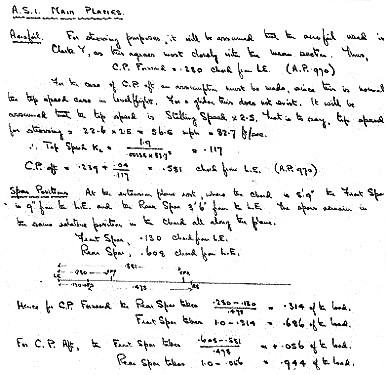 Dated May 1931 and in Shute’s handwriting, this is believed to be a page of the final version of the TERN glider calculations

The TERN was to have a cantilever wing of normal two-spar construction, with continuous taper from root to tip with no built in dihedral. A short centre-section is built-in to the fuselage top, to which the outer sections are bolted by two vertically placed bolts in each wing. The plywood covered fuselage is of rather large cross-section and provides a comfortable cockpit for the pilot, but inevitably gives rise to rather large parasitic drag. It was stressed and equipped with a pair of removable wheels to facilitate Auto winching or Aerotowing into the air at 70 M.P.H.. The rapidity with which this sailplane can be assembled is an outstanding feature, and is due largely to the automatic inter-locking of the aileron and elevator controls as the wings and tail are assembled. (GLIDING AND SOARING by G. H. LATIMER-NEEDHAM) 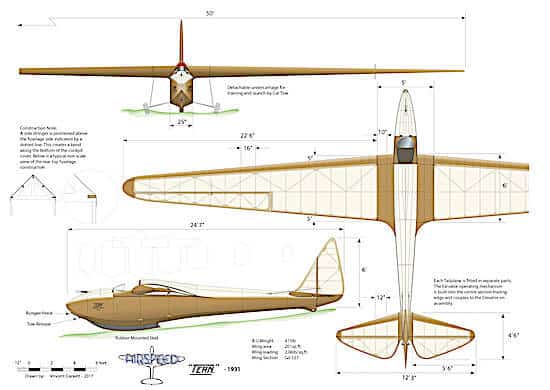 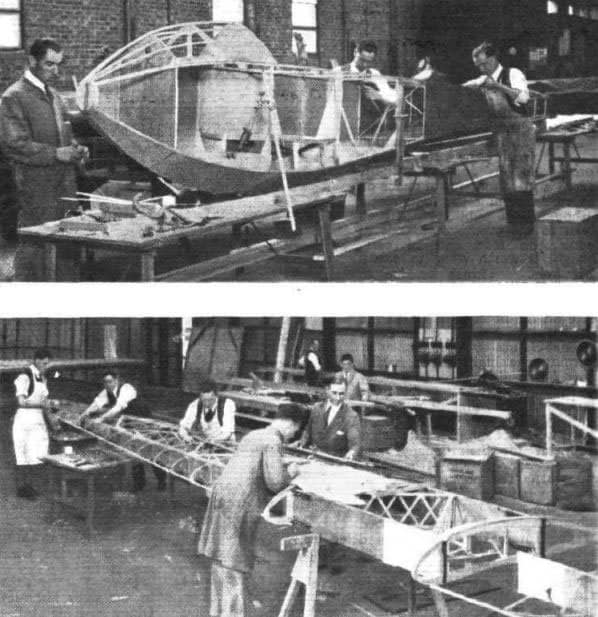 Tern construction at the Factory in Picadilly, York

The Tern hangs from the roof and shows construction

The first flight was carried out by Shute, who had only recently achieved his gliding licence, at Sherburn-in-Elmet aerodrome in early August 1931 and had been registered the same month with the B.G.A with code BGA 190 being allocated. It was towed into the air by Airspeed’s Buick and it was reported that the TERN was very stable and flew well. 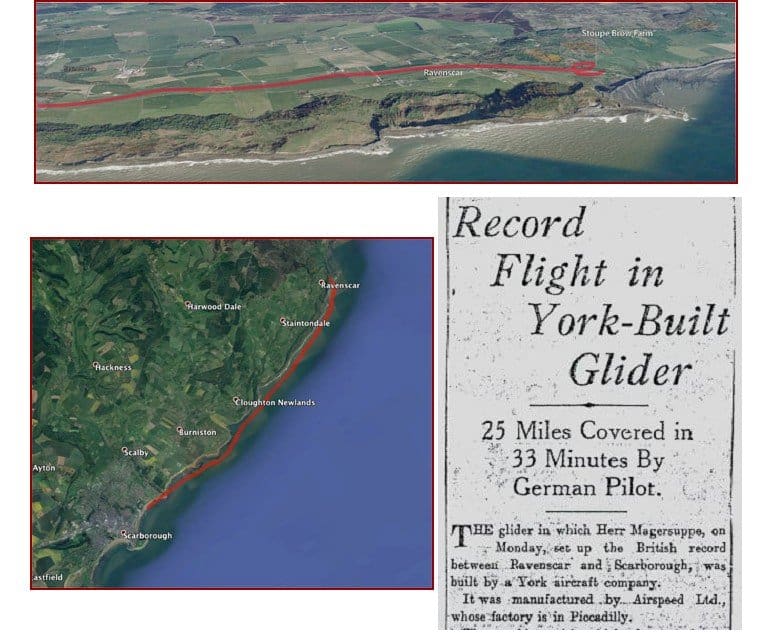 Shortly afterwards, on the 24th August, Carli Magersuppe made a British Record flight of 8.3 miles, taking 33 minutes, from a headland just north of Ravenscar where he climbed to 300 feet and set course following the coastal cliffs south to finally land at Scarborough’s North Beach. The TERN’s flight is the first British Official Distance Record to be recognised by the British Gliding Association. The actual distance flown was 16 miles, but the official record distance is measured as a straight line, point to point

(Note:The launch site is usually referred to as Stoupe Browe, but that is still some distance north of Ravenscar and well outside the 8.3 mile record distance. There is a farm closer to the possible launch site called Stoupe Brow Farm which fits the criteria – See map)

The TERN continued to break records and on September 27th at Ingleby Greenhow, Yorkshire, piloted by Major H. Petre, the TERN set up an official British altitude gain above start point of 785 ft Below is the Barograph data from FLIGHT Magazine

One of the features of the TERN was it’s speed of assembly and at the 1931 International Gliding meeting at Balsdean above Rottingdean on the Downs, a RIG AND FLY CONTEST was held. Maj. H. Petre’s team won the prize by rigging in 3 min. 37 sec. followed by a short flight of 1 min. 15 sec. No previous practice had been made for this event. Petre also won the Figure of Eight contest and Magersuppe flew the TERN, which rapidly disappeared out of sight, across the valley, in the mist, to earn him second place in the Distance event. 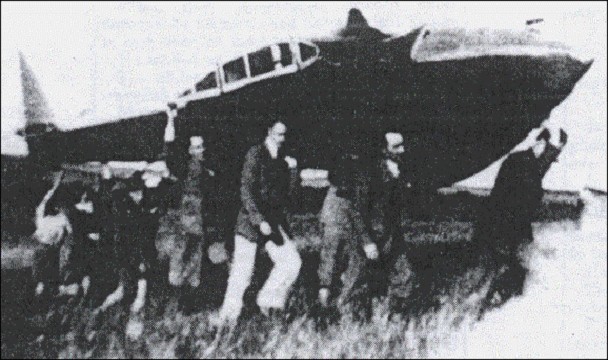 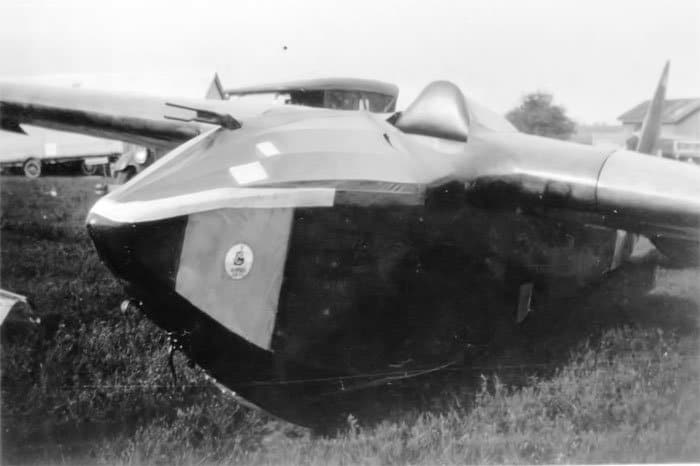 On the 18th October at an event held by the Furness Gliding Club on Kirby Moors,the day ended with a three-mile glide, Herr Magersuppe, in the TERN, cheering up the departing spectators by circling over the Askam railway station before landing on the village green or thereabouts. (From Flight Magazine with Photos below from the Lakes Gliding Club)

The TERN was now beginning to receive high praises, even from some of the most experienced German pilots

At Sutton Bank on 25 July 1932 with the aim to fly the glider for 24 hours in an attempt to beat the endurance record of 21.5 hours, there was an unfortunate accident. The pilot was Edward Mole and this is his story from his book “Happy Landings”

In July 1932, I was invited by Mr N. S. Norway to test the new TERN’ sailplane that he had designed and which had just been built by his firm, Airspeed Ltd, then in York. In order to 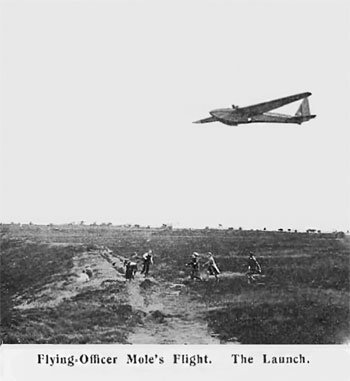 publicise the glider, he wanted me to make a 24-hour duration flight in it, which would have been the world record at that time. I took four weeks leave and stayed with my old friend Wanliss, now based at Catterick Camp, where the local RAF officers volunteered to assist me. The trials took place at Sutton Bank, a magnificent bowl of hills 1000 feet high and facing north-west; an ideal site which had first been flown the year before by Magersuppe, a German glider pilot in his Professor sailplane. The TERN was a beautiful sailplane but extremely heavy. To launch it off the deep heather at the top of Sutton Bank required eight men on each of the bungee ropes, but once in the air it soared easily. I carried out several flights around the Sutton Bank bowl, some of four or five hours’ duration, but each time the wind dropped and I had to land. One day the wind veered to the north with a good forecast for a 24-hour flight, so we moved the TERN to Ingleby Greenhow — another splendid hill site facing north. I had arranged for a dozen hurricane lamps to be placed around the edge of the ridge to enable me to locate it after dark. That evening, Wanliss and his group of volunteers launched me off and I cruised around the ridge happily for an hour or two. Then, as dusk came on, I looked anxiously for the lamps — but there was no sign of them. It grew dark and I could no longer see the ridge, so pulled off a blind landing on the deep heather at the top of it, fortunately without damage. Soon afterwards I saw the headlights of cars coming up the hill, and there arrived Wanliss and his merry men who had been down to the village pub for drinks, and had forgotten all about the hurricane lamps. Wanliss was deeply distressed: ‘I am a Judas,’ he proclaimed loudly! 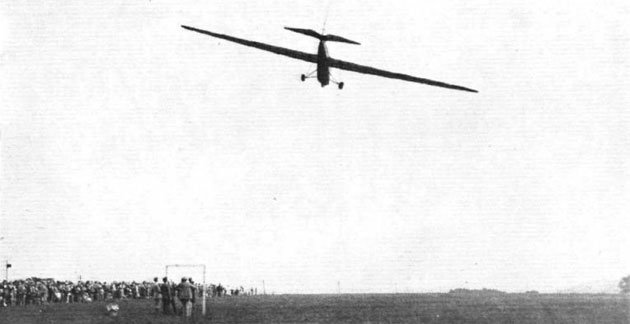 A few days later we had a splendid forecast of a steady westerly wind likely to prevail for several days. We decided to fly the TERN at dawn the next morning, but on arriving at Sutton Bank had difficulty in raising enough crew to launch it. We stopped all cars on the road calling for volunteers, but after several wasted hours I decided to try a launch with only five men on each bungee. The TERN gained insufficient speed to take off properly, and sliding through the heather, it hit a concealed stump of an old fence which split the fuselage wide open. The record attempt was finally over. I shall never forget poor Nevil Shute Norway’s face as he viewed his wrecked glider. The TERN was his pride and joy, and was indeed the first and only aircraft so far built by his firm, Airspeed Ltd..

In March, 1933, Airspeed moved from York to their new factory at Portsmouth

By May of 1933 the TERN had been repaired at Guildford and sold to Graham Andrew Little , Alan Herbert Reffell and Dr Alan Fleming McGlashan at Southdown Gliding Club. G A Little took over full ownership from 1935 and it continued flying until 1939, placing fourth in the Nationals in 1938.Andy Coulson of Newcastle had previously purchased the parts for the second and third TERN from Airspeed, which he used to create a second flying TERN (Pictures below). This one was built slightly different in that it had an enclosed cockpit, the top radiuses rear decking was replaced with a flat top, the tip of the rudder was reduced and dihedral was now built into the wings. The Glider was sold to the London Flying Club where it was joined by the first TERN. 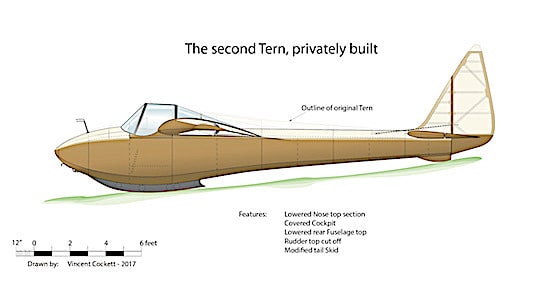 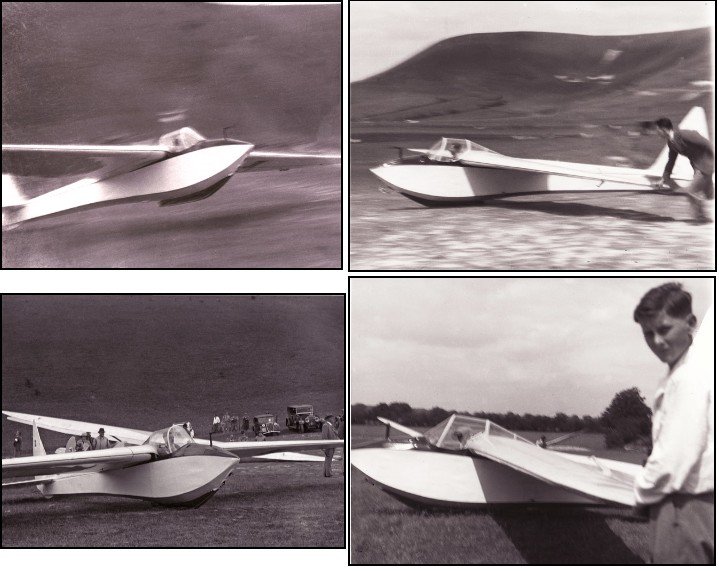 In 1947 the first TERN was sold to the RAF Gliding group and the second TERN operated from Weston Zoyland, Somerset before being transferred to a group at the Bristol Gliding Club at Lulsgate, now Bristol Airport, where it was slightly damaged in 1948 and sold as spares to Andy Coulson

The TERN had been designed as a ridge soarer, but by the end it had been overshadowed by the more superior thermal soarers. Its light wing loading, gave it a performance which was first class in every respect except penetration as speed was not required for the slopes. It had been the best of the early sailplanes, designed to perform well in light winds. 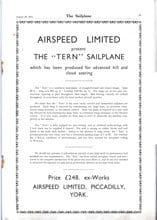 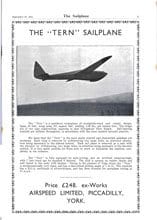 Edward Mole talks about the Tern (The Sailplane)

The Tern compared to a Vultures flight (The Sailplane) 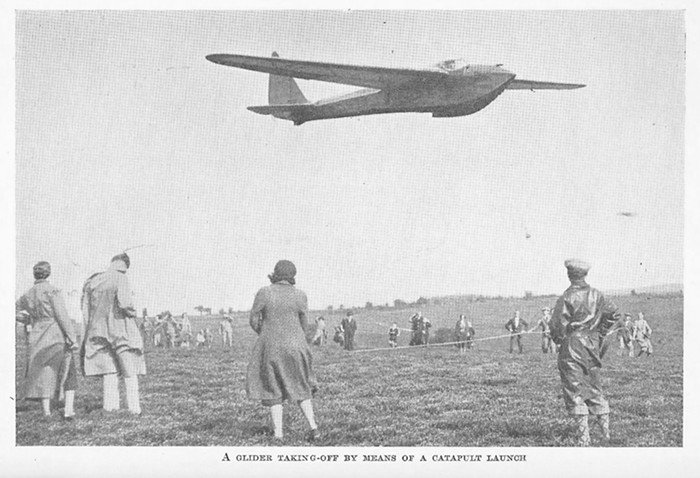 For plans and build go here: