In 1945, there fell into the hands of the English, at Slingsby Sailplanes, not the Maid of Orleans, but two forlorn little French sailplanes. Exactly how and why they came there, we have not yet been able to discover. Rumour has it that they were there for evaluation. However, they were quickly deemed unworthy of interest, possibly due to the age and refinement of their design, which did not suit economic post-war production. Indeed, they were light, slow and delicate and these qualities would not have allowed them to survive in the expanding, tough, post-war British Gliding Movement. Moreover, a stronger, modified German Olympia sailplane was already in mass production.

Thus, the dark thoughts of some may have turned to suspicion and burning, as they did with Joan of Arc, many hundreds of years ago.

However, incredibly, one of these little AVIAS has come through to our present time and survives in Cornwall as the last-to-be-made-airworthy pre-war French designed sailplane. 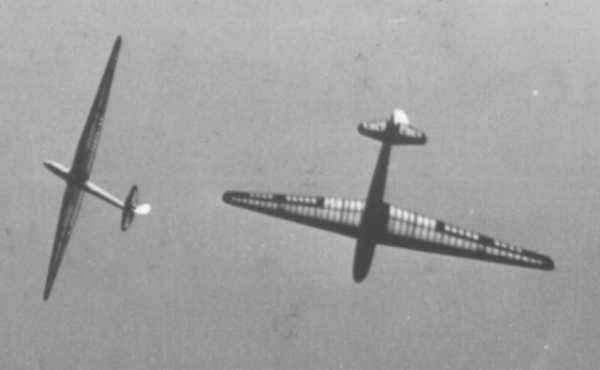 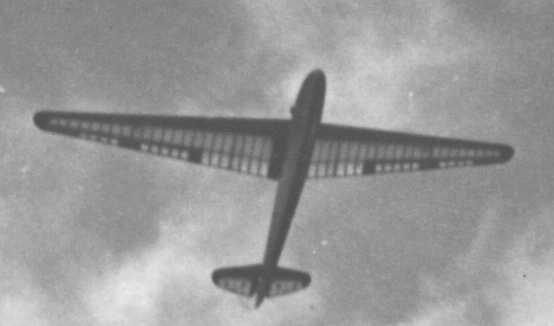 It is now possible to relate, thanks to the efforts of John Saunders, and those of our French colleagues, that unknown to us in 1945, there were in our midst, two of the grand sailplanes of France, from that golden era before the war.

During the early 1930s, the French firm of AVIA (not to be confused with the Czech firm of the same name, which was producing aircraft near Prague) was presided over by a Colonel Wateau, directed by Pierre Massenet and had, as Technical Director, the French Glider Designer, Raymond Jarlaud. As if this was not enough to ensure success; also with them were the legendary French Glider pilot Eric Nessler, and Monsieur Cartier. 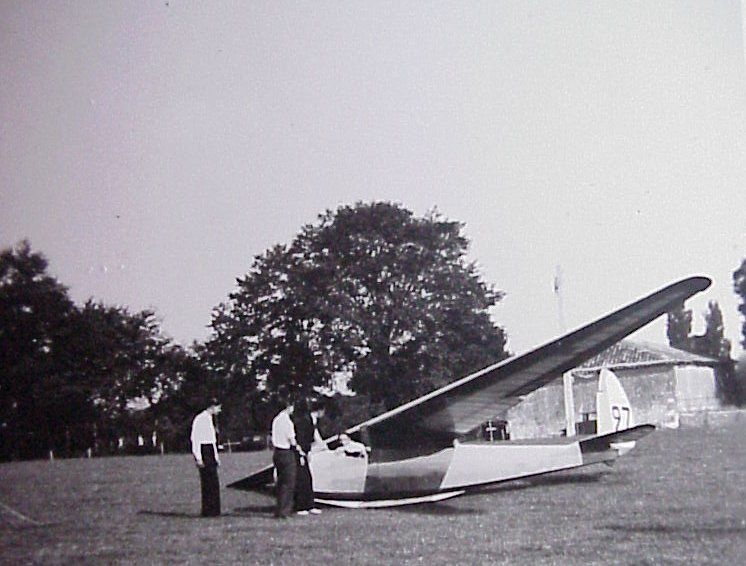 The firm’s object was to design and build all types of gliders necessary to put the young French Gliding Movement on its feet and to be a centre for all technical matters pertaining to French Gliding.

The main gliders produced by the firm were the following:

(The above four types were developed from the German Zoegling,)

Raymond Jarlaud was the leading French designer responsible for the Avia design and for that of the C.800 standard training 2-seater in use by French clubs after the war and of which 300 were built. He also designed the famous AIR 100 and AIR 102 sailplanes. He died in 1972.

Eric NessIer was the French equivalent of Gordon England. He took part in the first French gliding meeting at Combegrass in1922. He was still flying the Fauvel AV 36 flying wing, a type that he particularly championed, shortly before his death in 1977. Among the flights that made him a legend during his lifetime we should mention

His widow continued to live at Malesherbes, near the gliding site of Buno Bonneveau where he often used to fly his AV 36.

The AVIA 41P was too complex for mass production in 1932. Its max L:D was 1:25. It is likely that only one was ever built but we would be grateful for any precise information on this point. At the time, it was France’s best sailplane and we believe that Eric Nessler flew it in preference to all other types.

His finest flights with this machine were

As the 41P were not put into production, the 40P were produced instead. It was of orthodox wooden design with the wing mounted on a pylon above the standard box fuselage. Initially spoilers were not fitted to the wing but were fitted retrospectively to the strongly tapered cantilever wing. 20 were built from 1935 to 1943 and its characteristics were as follows:


BGA680’s weight must have increased as it was built as a later 401P with modifications which included upper wing surface spoilers. Also, coats of paint, repairs and age will have increased its weight. This weight increase leads Mr. Saunders suspects that its max L:D of 1:23 is now achieved at 63.5 kph (i.e. 40 mph). 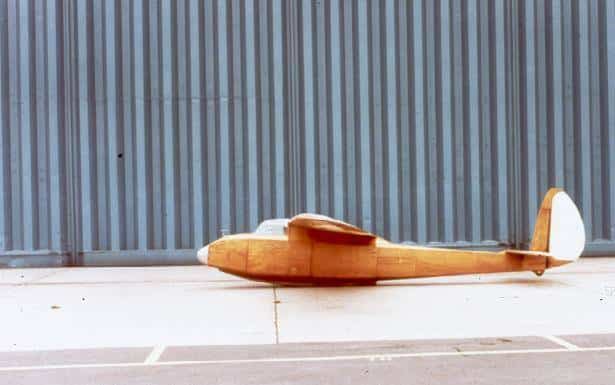 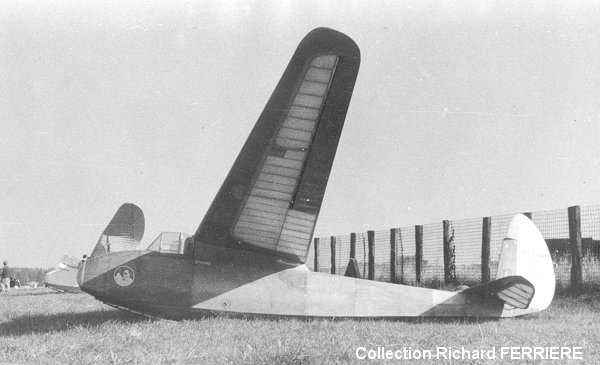 The following performances were registered with this machine:

During 1940/41, the Vichy Government was permitted to reorganise and expand French gliding in the unoccupied zones 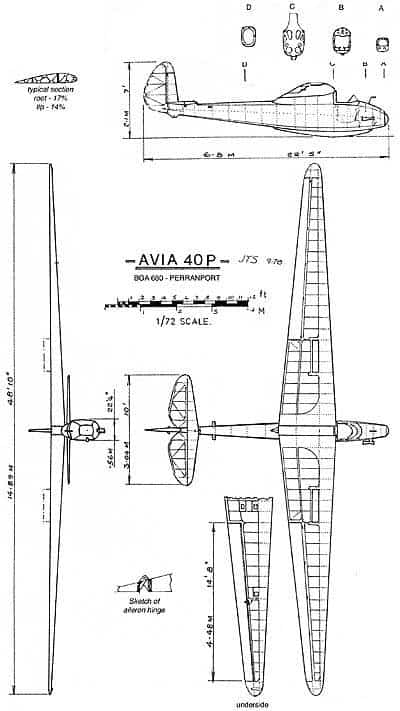 of France. For this expansion, there were too few gliders. With the exception of 10 Castel 242 2-seaters, and 4 Spalinger S.18s. only AVIA types were available. Among these, the sole performance Sailplanes were 20 AVIA 40Ps. However not all of these 20 were available, as some were still being built in December 1942. In 1943, the allied invasion of North Africa necessitated the German occupation of the whole of France for the defence of the Reich’s weatern frontier This total occupation prevented the expansion of French gliding after 1942, until 1945.

Five 40Ps were at La Montagne Noire in 1948. In 1952, another was being carefully kept at the Beynes National Centre. Some were still flying at that time at Chavenay and Cazaux. One was still flying in Algeria in 1960. One is presently on display at the Musée de l’Air at Le Bourget. The machine that survived in Britain is BGA 680. It is being restored to airworthy condition at Perranporth, Cornwall. Strictly speaking, it is an AVIR 401P because it has the upper surface wing spoilers characteristic of the wartime production of the type. It was not built in the Avia workshop, but by a small family firm, Roche Aviation of La Courneuve, La Plaine Saint Denis, North East Paris. Other AVIA 40Ps were also built at Castelnaudary and in Algeria.

We are grateful to John Saunders for the following account of how a Vintage French sailplane came to grace the skies of Cornwall:

The story began when Alan Brook, in a search for a cheap light powered aircraft, such as the Pou-du-Ciel or a B.A.C. Drone, visited a workshop at Knowle near Birmingham. In the back of this repair shop built from discarded P38 lightning shipping cases, AIan Brook discovered a sailplane of pleasing lines even if it was rather dejected and holed. Don Burgoyne, magician extraordinary of the Aladdlin cave of Tudors, Drone, Petrel, etc., offered to repair and cover it to flying order for £100. AIan Brook half-accepted and then started to make inquiries about being able to register it with the B.G.A.

Mr. Burgoyne had purchased the AVIA from the B.G.A. It was one of two that had been given to the B.G.A. and sent on to Fred Slingsby, I can only presume, for technical appreciation as Slingsby’s showed no interest in the type, or its repair to flying condition. Hence the disposal “reported to be in a very poor condition and sold on the explicit understanding that unless found suitable for repair, and subsequent flying by the A.R.B. to be used for ground slides only.”

It would take good solid facts to get the B.G.A. to remove its proviso, after all the type was unknown in this country and at the time an attempt was being made to foster home manufactured machines. Perhaps the other AVIA, airframe No. 119, sold to Aerotech Gliding Club, Kent, was ill used or ill repaired, and had biased the B.G.A.’s outlook. Don Burgoyne had the faith, he put his skill into the repairs, or was it that he considered the workmanship, particularly the fine ply splicing, indicated a first rate design. One B.G.A. inspector doubted its strength because it never had struts!

A chance remark in a letter of inquiry about MonobLoc AV 361 to Fauvel in France brought about contact with M. Raymond Jarlaud and thus enough data to convince the B.G.A. that the AVIA 40P was a well tried and tested design. But maybe the B.G.A. knew already, as airframe 117 amassed 18 hours of flying in a total of twenty two launches before it became B.G.A. 680, its first flight being on the 2nd of October 1950, 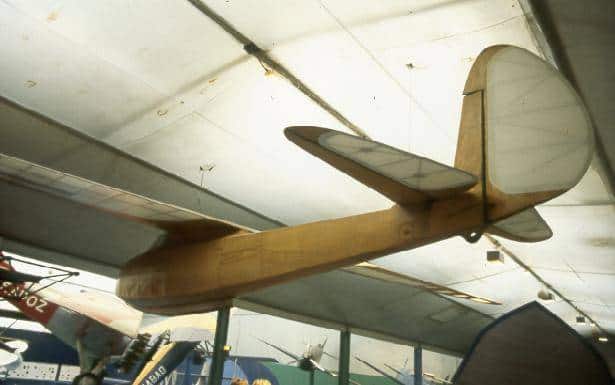 Its C of A was granted on 5th September 1952, and by the 10th it was registered in the ownership of the Hereford Gliding Club, forerunners of the reformed Hereford of Shobdon. I wonder how many of the Club’s members can recall the days of “pull off’s” from the meadow alongside the River Wye? Or flew that AVIA in its smart coat of cream Cellon? Apart from an initial problem with aileron flutter, corrected by advice from M. JarIaud to tighten the control cables, the AVIA B.G.A. 680 flew well at Lugg meadows and on the long Mynd, logging 97 hrs and 124 tows by September 1953. It was taken into syndicate use shortly after its C of A and the new owners, Alan Brook, his father, J. A. Brook, a founder member of the Hereford Gliding Club, and Col. G. Benson, made the best of its performance. Both Alan Brook and the Colonel obtained Silver “C” certificates on BGA 680. The AVIA was usually last into the hangar at the Mynd, having had a good soar around in what was called “The Evening Thermal” and now called wave lift! It would hold 550 ft in a 5-knot breeze on the ridge there. The only trouble was slight damage from a heavy landing at the end of a cross-country flight.

Interest in the AVIA diminished due to business and studies, so it was stored from September 1954, until it was worked over by the Old Warden Aviation Co., on the 8th April 1957. Mr. Alan Brook took charge of the AVIA, with the aid of his wife, a. trailer, and an ex-army Ford 4×4 converted with a winch on the back, to serve as trailer tow truck as well as tow winch, thus able to aviate from many farm sites. Travelling, camping., and gliding holidays, what better way to travel about England! 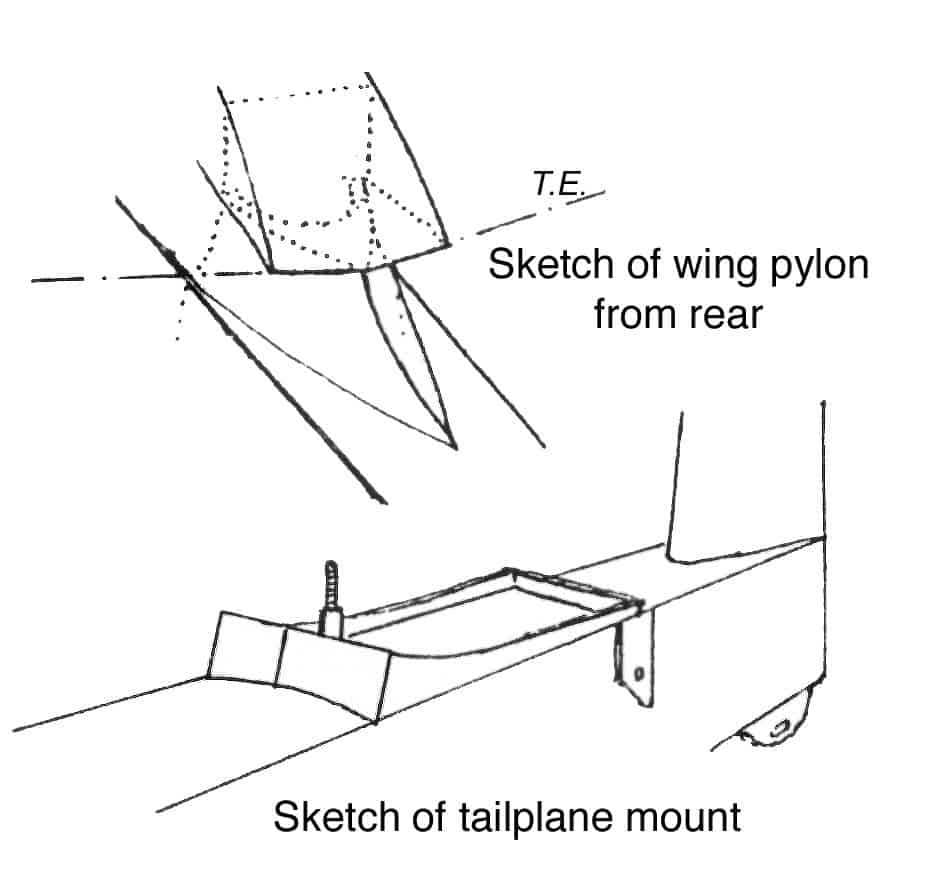 Alan became a farm owner in Cornwall, at Short Lane’s End. Colonel Benson dropped out of the syndicate and the Avia came to Cornwall. It was flown for some time at the farm, being winched into the air by the Ford Beaver arid had many good thermal flights.

It was whilst flying from a field alongside the A.30 near Causilgey, under a sea breeze front, that a passer-by, Pip Phillips, appeared over the hedge and acquainted Mr. Brook with the proposed formation of the Cornish Gliding Club.

They both attended the first introductory meeting at Truro, and the AVIA became one of the founder sailplanes. Alan was only luke-warm on the Club site at Trevellus, but: fell in with Bill Lewis, so sharing the site with the Eon Baby and Tudor 8, as well as flying from farmland arid Davidstow.

At the next C of A, Alan and Bill reworked the colour scheme of the AVIA, adding red to the leading and trailing edges, the fuselage top, and bottom, neatly rounded in with the aid of 3 passing dustbin lids!

Led by the AVIA syndicate, the Cornish Club learned the joys of travel to lands beyond the Tamar and expeditions to other clubs especially the Mynd.

Dave Penticost bought out Alan Brook’s share. The AVIA was the basis of many outstanding syndicates. It also had its troubles and a major setback when it was blown onto its back on the runway in March 1967. It was repaired by South [)own Aero Services and checked out on aerotows by Ken Frip and Bill Scull. 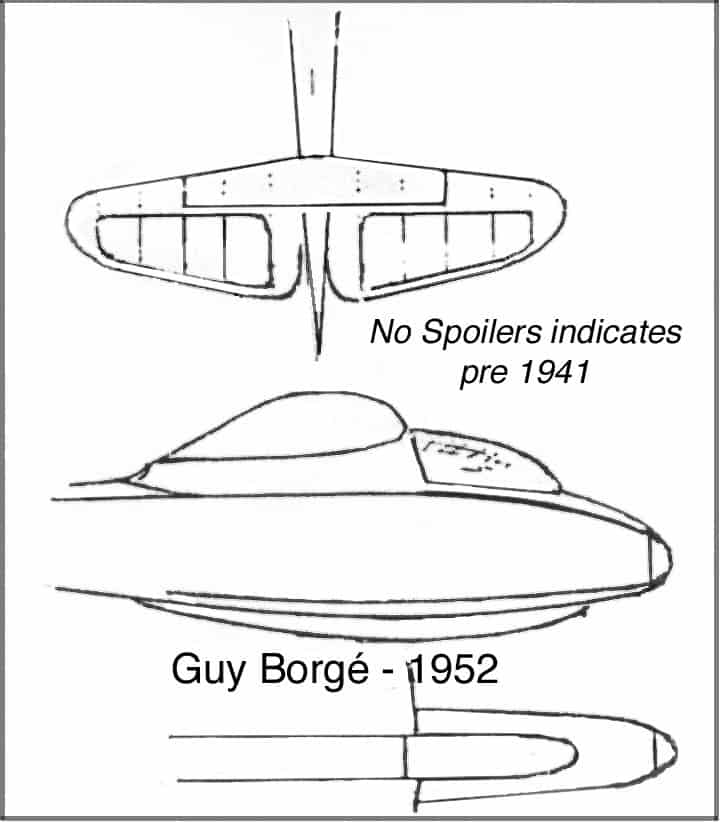 About the only serious Cornish record flight in the AVIA was made by Jeff who used auto tow and the north wind to fly from Trevellas to Lands End Airport. Well almost! Jeff Ianded in the next field because he was too low to see where the actual airport was. Not quite so low as he had found himself on the crossing of the bay between gathering height off the cliffs at Godreavy, and going straight to St. lves. The story goes that Jeff returned the waves of holiday- makers in the hotels above him! St Ives is not a multi-storey area!

The AVIA now rests in the hangar atop the cliffs at Trevellas, Perranporth, having been in since 1974. The present syndicate are Ron Keeping, John Woolbridge and Peter Arthur. One day, when it is restored to its “as-new condition”, perhaps these pilots will treat us with a sight of the AVIA going up in the chute of lift from Cligga Head that all the modern sailplanes pass swiftly through.