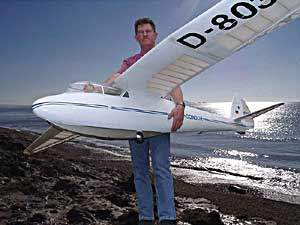 An E-mail from Ted Horvath in Canada poses an often asked question: ‘…I would be curious about your thoughts concerning aileron servos, namely, how much power (torque) they should have and what represents overkill. Perhaps with the size models you make saving an ounce or two is irrelevant, but suppose for a moment the servo will be mounted in the wing as close as feasible to the control horn and that saving every gram is worth effort. Do you think in terms of the model’s total weight, wing span, area of the aileron, or all the above and more when you select a servo for the job…?’ When I reviewed Peter Mallinson and Mike Woollard’s book ‘The Handbook of Glider Aerobatics’ recently (an excellent read, available from Airlife) an interesting fact came to light which goes a long way to answering Ted’s question. ‘…The ability to apply flight loads increases as the square of the airspeed. This means that if one DOUBLES the speed of flight, then FOUR times the loading can be applied by the pilot…’

Now, I would like to be able to say that when planning the radio installation in one of my models I reached for the slide rule and by a process of reasoned and logical calculation worked out which type of servo would exactly fit the requirements of the job in hand. I’d like to say that, but I can’t…

Given that my modelling takes place within the confines of a rather restricted budget, the big question concerning servo purchase for me concerns ‘how much’ rather more than ‘how strong’. Years ago I started using the standard cheapo Futaba 148’s, and I have to say that so far at least, whatever the size of the glider, these servos have given extremely satisfactory service.

Going back to the ‘Handbook of Glider Aerobatics’ you can see that weight, wingspan, aileron area etc, are of little consequence in relation to the question of speed. The big question involves exactly what type of model you are building and in what manner you are going to fly it. If it is your intention to build an aerobatic glass ship, fly it up until it is a speck in the sky and then point it vertically at the ground until the wings shriek in protest and your friends dive for cover, then perhaps further research into servo torque and applied aileron loads is required. If, on the other hand, you are happy to float about most of the time in a scale fashion, with some modest aerobatics thrown in now and again, then the standard type of servo should do the job admirably. 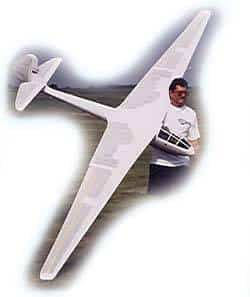 This applies even to large models with huge ailerons; I’m thinking here of my 1: 3.5 scale Petrel who’s ailerons are each 5′ long! In fact the issue here is not so much servo power, as wing flex; when on one occasion I got a little over-excited and went past the model’s VNE, the bend in the wing effectively locked up the ailerons and only a reduction in speed restored the status quo.

So, to go back to Ted’s question, for normal flying within reasonably modest parameters, just about any sort of servo should do the job of moving the ailerons, the choice really being down to size, price and compatibility with your radio.

Just about the largest model I’ve used the 148’s in so far is my 1: 3.5 scale Slingsby T31, and thanks to the slow speed at which it poodles about, they have no trouble coping at all…