1922-33 Gliding in Germany during this time was a sport and not a political weapon.

Running parallel to the NSFK periods, from 1939-43 and from 1943-45 were two WL (Wehrmacht Luft) [Armed Forces Air] periods. The gliders of the WL had their own distinctive markings, which were different from the NSFK.

The NSFK was part of the HJ ( Hitler Youth ) which encouraged boys of 12-17 years to fly. This was roughly the same age group that is involved with gliding in the British Air Training Corps. The WL gliding clubs were similar to those of the RAFGSA, RNGSA and the Army Gliding Association. Included with the DLV and NSFK was a Lufthansa Gruppe. This corresponds to the British Airways Gliding Club.

1922-33 Gliding in Germany during this time was a sport and not a political weapon.

Running parallel to the NSFK periods, from 1939-43 and from 1943-45 were two WL (Wehrmacht Luft) [Armed Forces Air] periods. The gliders of the WL had their own distinctive markings, which were different from the NSFK.

The NSFK was part of the HJ ( Hitler Youth ) which encouraged boys of 12-17 years to fly. This was roughly the same age group that is involved with gliding in the British Air Training Corps. The WL gliding clubs were similar to those of the RAFGSA, RNGSA and the Army Gliding Association. Included with the DLV and NSFK was a Lufthansa Gruppe. This corresponds to the British Airways Gliding Club.

First Period: 1922-33
This was the dawn of German gliding, and flying mainly took place on the Wasserkuppe and at Rossiten in East Prussia. The Rhön-Rossiten Gesellschaft (company) had its own designers, gliders, instructors, meteorologists, etc.. They were led by Oskar Ursinus, who got them to come to the Wasserkuppe every year from 1920 for competitions, (He was known as Rhönvater Ursinus), Walter Georgii,the excellent meteorologist of the England Geschwader, the squadron of Gothas, which bombed London during 1917-18, Fritz Stamer, instructor, and Alexander Lippisch, who became a brilliant glider and aircraft designer.

The plywood parts of the gliders were stained any colour from light honey to dark mahogany. The fabric was clear doped and clear varnished. The cotton fabric then became an ivory colour which flashed gold should the sunshine through it.

Sometimes the glider’s name was painted in white on the nose. The writing was seldom in gothic script and often in full capitals.

e.g. : D- FULDA, on an improved Professor, on the fuselage sides.

The transparent finish allowed the plywood and fabric to be easily inspected. Any bad workmanship or structural failure instantly showed. It was lighter than a painted finish and was thought beautiful. This ‘natural’ finish occurred occasionally on gliders up to and after 1945, although it was not an official colour scheme. Examples were the Horten 4a flying wing of 1941 and the Horten 6 Of 1944. Registrations were in black.

This was the time the politicians began to use gliding for propaganda and for training pilots. It became a sport with a point. Leader of the DLY was Colonel (later General of the Luftwaffe) Bruno Loerzer. He had been a fighter pilot in the First War with Goering and Richthoven. During the 1920’s he had made an important transatlantic flight with the Dornier “Wal” (Whale) flying boat. In 1936 he was Reichssportfuhrer with a special interest in flying. During the Battle of Britain In 1940 he was Angriffsfuhrer England on the Channel Coast.

It was decided, during 1935, to divide all civil flying into Luftsport Landesgruppen, one for each area of Germany. Each area of Germany would have gliders with at least their fuselages painted in a different colour, or in two colours, so that it would be possible to identify from which area a glider came from with the colours. It is evident that during 1936 not all gliders were painted in this fashion. Exceptions were Kurt Schmidt’s Mu-13 D-Atalante, Hanna Reitsch’s Sperber Junior and Ludwig Hoffmann’s Rhönsperber. From 1934, national colours began to appear on gliders’ fins and rudders. These were the black (uppermost) white and red horizontal bands, which were the old Prussian colours of Germany. Also beginning to appear on fins and rudders was the black swastika in a white circle on a horizontal blood-red band, the Nazi emblem. Here we have a problem. 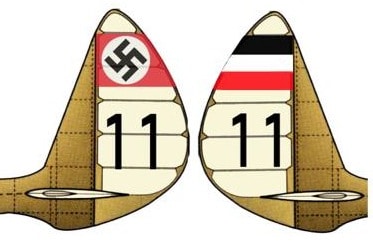 During 1934 some Bucker Jungmann aircraft visited England. Their fins and rudders had their right sides painted with the black, white and red bands of Prussia, and the left sides painted with black swastikas on white circles, amid red bands. this was also the case for gliders. In September of 1934 the law changed requiring the use of the swastika on both sides.

With the swastika mounted on the white circle on the red band, the red was often taken up to include the tip of the fin and rudder. This occurred during 1936/7. Usually the red band did not come quite up to the tip of the fin and rudder, which remained the colour (usually cream) of the sailplane. There were cases, particularly during 1938, when the swastika, white circle and red band were only on a sailplane’s rudder, the fin being left the basic colour of the sailplane. Examples that had this scheme were the Sperber Junior (1936), some Kranichs and the first two Weihes in 1938. So far as we know, all German gliders were painted with oil based paint, which is far sore likely to keep airframes and casein glue watertight than cellulose paint.

Luftsport-Landesqruppen, their colours and areas in 1935.

Apart from the above was the Reichsgruppe Lufthansa. In the 1935 Rhön contest the Lufthansa Gruppe entered two Condors. The one entered by Peter Riedel was the Motor Condor. As far as is known it was painted cream with LA FALDA in black written in capitals along its sides. The Luftsport-Landesgruppe sailplanes all had D- followed by the name of the sailplane, the name of a district or town, the name of a famous pilot or of a hero of the past, sometimes in Gothic script, along their fuselage sides. On fins and rudders the black swastika on a white circle mounted on a blood-red band, replaced, more and more, the black, white and red bands of Prussia.

Korpsfuhrer was General-Leutnant (later he had a political rank – Gruppenfuhrer) Friedrich Christiansen. In 1916, as a naval pilot, he had led a successful seaplane squadron from Zeebrugge. An unairworthy replica of the Hansa Brandenburg seaplane that he flew can now be seen at Thorpe Leisure Park, as part of Leisure Sport’s collection of historic aircraft.

After 1918 Friedrich Christiansen became a sea captain. During a transatlantic voyage he heard of the penniless pilots trying to fly again on the Wasserkuppe who had no funds to pay for medical care should they have accidents. He sent them some money, and thus became the German Gliding Movement’s first financial helper. During the 1920’s Christiansen flew the Dornier 1, with its 12 engines, across the Atlantic to America. During 1937 he became Korpsfuhrer of the NSFK and during 1940, as a Luftwaffe General, the Military Governor of the Netherlands.

All gliders of every area now had to be cream. This we have matched with British Specification 366 Light Beige (extracted from BS 381c, 1964.) We have no idea whether this cream oil-based paint ever varied in hue.

D- followed by a number representing the NSFK Gruppe to which the sailplane or glider belonged, followed by a number representing either its number in that NSFK Group, or its number among all the gliders and sailplanes in Germany at the time of its delivery. Typical registration is D-11-3400. NSFK Gruppe 11 was that of Hessen-Moselland with headquarters at Frankfurt as Main. That the position of this lettering was not always so is evidenced by a Grunau Baby 2B-2 having D-3-340 in black beneath the red band of its rudder, and no other markings except the NSFK sign (on sides of nose) on its fuselage or wings. A Mu-13D was like this also at Salzgitter in 1945.

Many sailplanes and gliders at this time and later still had their fabric transparent doped and varnished. Only their plywood parts were painted. As can be noted from the following list, NSFK numbers corresponding to areas were very such the same as the earlier Luftsport-Landesgruppen.

The Nationalsozialistisches Fliegerkorps list below is from 1938, after the annexation of Austria (Ostmark)

NSFK gliders had their fins and rudders adorned with the then official emblem of Germany, a black swastika on a white circle in the centre of a blood red band. This was often not taken up to the tip of the fin and rudder, which remained cream.

From June 1943, the black swastika, with now a thin white outline, was painted on the basic colour of the sailplane ( of the fin and rudder ). Gone were the white circle and red band.From June 1943, the previous marking system (e.g. D-11-3400) was replaced by an entirely new system, although a few gliders retained the earlier marking system until 1945. The new system consisted of two groups of two letters with a dash between. We believe that the first two letters referred to the glider’s area command (Luftgaukommando) while the second pair referred to the glider’s own identification. The markings were in black paint. A typical example is as follows : LG-TR on a Grunau Baby. These markings were often left off the wings. From these letters we do not know yet how to identify an area.

From 1 January 1939 – 25 June 1943, these were WL- (Wehrmacht Luft) followed by a roman numeral representing Luftgaukommando (area command), and an arabic number, which represented the number of the glider in the command or number of the glider in WL. On all WL gliders as on post-1943 NSFK gliders, the swastika on fin and rudder was painted black with a thin outline on the cream or doped surface, there being no white circle on a red band. During 1944 some WL and NSK gliders were given a scant green or grey camouflage, sometimes only on their upper surfaces. The standard basic colour was cream, and often fabric covered parts were left clear doped. On 1 March 1935 the Luftkreiskommandos were :
LKK I Konigsberg
LKK II Berlin
LKK III Dresden
LKK IV Munster
LKK V Munchen
LKK VI Kiel (sea)

After 25 June 1943, WL registrations became the same as those of the NSFK second period, except that the dash between the two pairs of letters became a small cross (Balkenkreuz). A typical example for a Grunau Baby 2B-2 was LG+GX. Prom these letters we do not yet know how to identify an area.

Whereas NSFK groups did build and fly their gliders throughout their areas, centres of gliding activity in these areas were Reichssegelflugschulen (National Gliding Schools). By 1940 these were for :

Other Reichssegelflugschulen may have been created later.

Other Reichssegelflugschulen may have been created later.

Recently received figures of wartime production only reveal that over 16000 gliders were delivered during the war. As some gliders found in 1945 had no markings we must assume that these were new gliders that had been put into store by the Germans to await use.

concerning the four letter registrations (NSFK 2 and WL 2) from 1943-5. Whilst not suggesting that the illustrated lettering ZP-VA or ZP+VA is impossible, we must add that all our photographs reveal a capital letter L as the first letter of the sequence. We had previously thought that this stood for Luftgau, Luftwaffe or Luft, but our latest information reveals that this may have signified Lehr (training) or Lehrgeschwader (training squadron). Similar lettering was seen on military aircraft of the time, where the L definitely meant Lehr. Other military aeroplanes had lettering similar to ZP+VA.

For the preparation of this article Peter Selinger, Klaus Heyn and Paul Williams provided great help. We wish to thank them all for their help in contributing to our knowledge 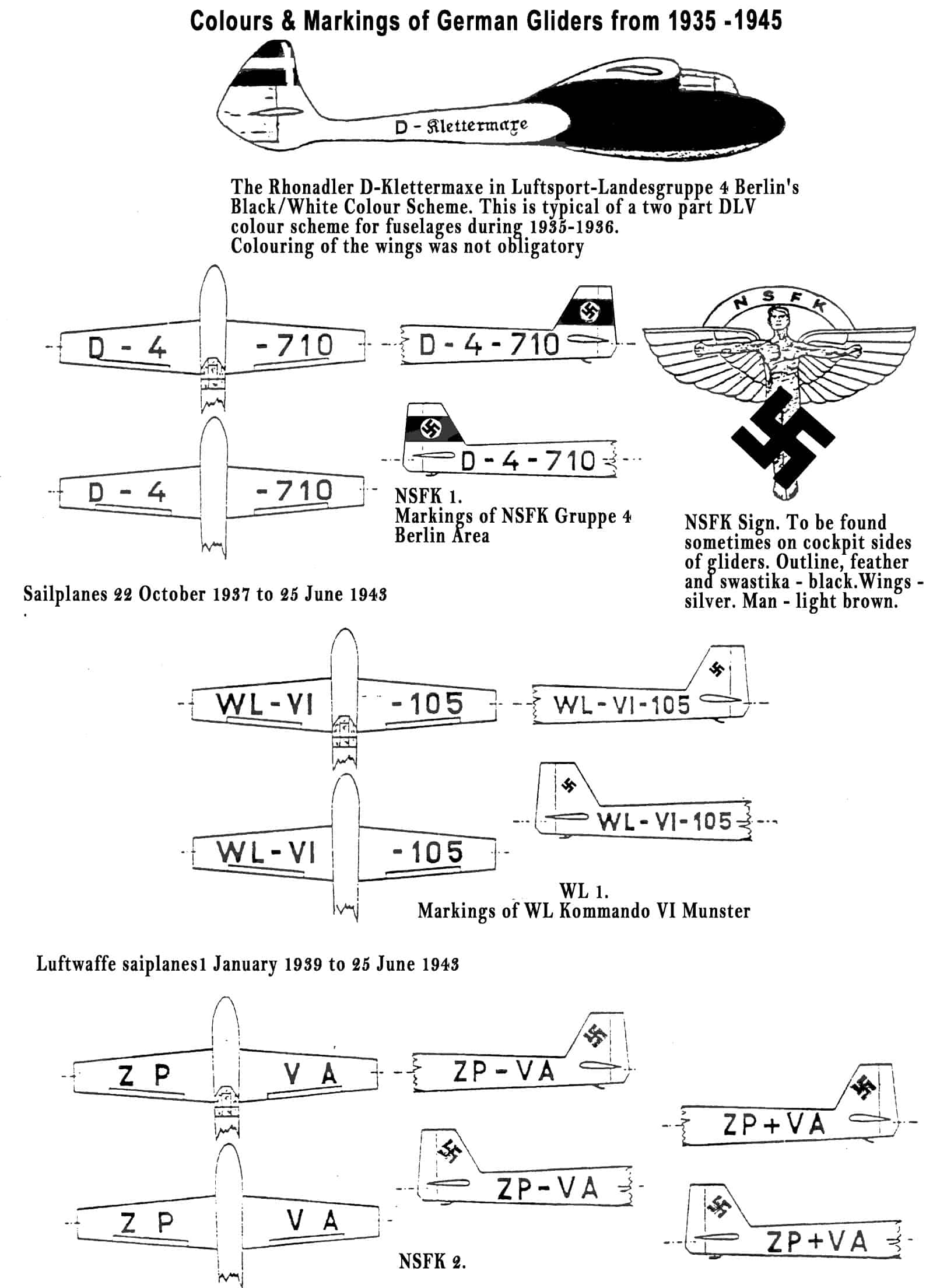