Flying on the right

Flying on the Right

After my first aerotowing event late in the year 1997 at the White Horse club, I was keen the following year to have another go. During one of my Web surfing moments, I came across a report of a previous years event at a French club in Caen. The report mentioned a second event the following year in early June. It was now early May, so I phoned the number given in the report, and was advised that the event was generally for gliders of 4mtrs, and bigger, but I could bring my 3Mtr ASK23. There was no entry fee, and Saturday supper, and Sunday lunch would be provided. I asked Mel if she would like a weekend in France, and all was agreed.

I am not sure which year this was, but I think 1998. The football world cup was on in France. (I hate football, and at the time I think the French did not think muchof us). We took the ferry from Portsmouth to Caen overnight.

As we were late booking and the aforementioned football houlies were travelling in droves, there were no cabins and no seats, so we “slept” on the floor all night. We arrived at the field about 10.30 on the Saturday, it was pouring with rain, and there was a good wind blowing. Despite this there was much activity getting the field ready for the event. (See Chris Williams article about our visit earlier year) We were welcomed by the French lads, some who spoke English and some who did not, however this did not seem to matter. There were some wonderful characters there. One flier from around Paris who introduced himself as Guy, spelt G.U.Y., and insisted that I MUST call him Gi, not Guy. The French are very touchy about their Christian names. The other who some of you will have met is the irrepressible Jean-Pierre Voisin. Jean-Pierre speaks less English, than I speak French, but if you give him the slightest hint that you Parlez Francais, he will give you a good 5 mins talking to, about all sorts of things, but I still know not what…

Saturday was a washout, other than about 30mins, and we were so tired after the journey that we missed the Sat evening meal.

Sunday dawned cloudy but dry, and then about 10.30 the Sun appeared. Out came the ASK, much to everyone’s amusement. 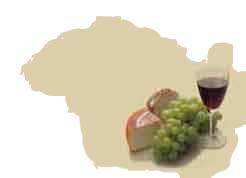 It was small, and light, and was I really going to flying it in this wind. Yes I was, crazy or what.. Anyway after about an hour or so, I had the longest flight of the Morning. At 12.00, just as the conditions were ideal, we stopped for lunch. I was speechless for a moment, and asked in my best and most diplomatic way “ARE YOU CRAZY”. Ah well they said:- ” You are English, and this is France. Everything stops for lunch, and besides our wives have made the food so we MUST stop”

There is no competition here, the object is to get as much flying in as possible, all flights are timed to the nearest 30 seconds or so, and the times added up at the end to see what the fun factor has been. Best so far is 27 hours, on the year that I did not go.. As I say, this is non competitive, but I think one of the French guys did have his time reduced when I suggested that he was thermalling over the lunchtime barbeque. 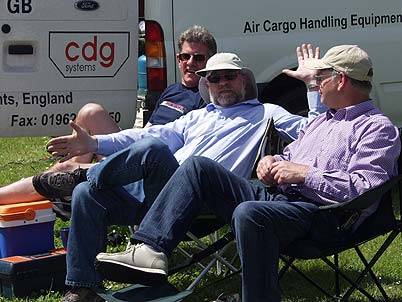 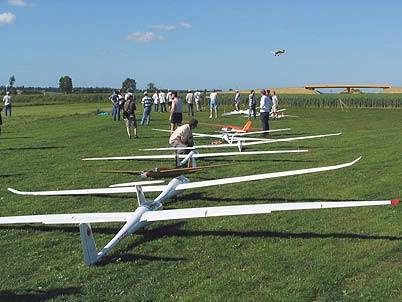 We went and had a bite to eat, and again as this was France there was wine to drink, but what was this wine I asked, as could feel that I would not have wanted to drive after more than one glass. Ah they said that will be the additive.

A word of caution here, anything that you are offered to drink will be 20-30% what they tell you it is, and the rest is probably Calvados. (Remember the Saturday morning coffee lads??)

As I had to be at work Monday morning we had to leave during Lunch, to catch the ferry home, but promised to return again.

2 Years passed before I was able to return, this time (2000) with Tony Baker and Martin Tigg. A great time was had by all, and the following year (2001), I think about 14 Brits invaded this corner of France.

When asked about this event I describe it as a Social event with Flying. We now go Thursday night, have the field to ourselves and a few others on Friday, and then enjoy the whole event and return Monday morning. This is a Fun fly with a capital F.