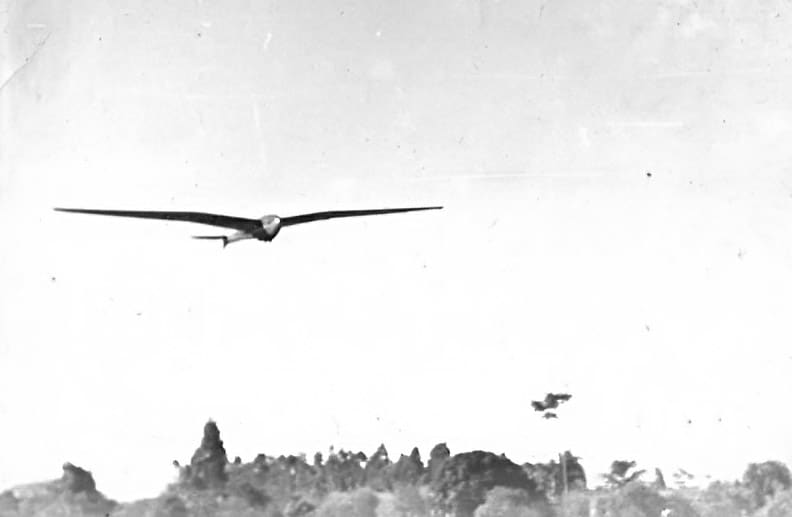 First flight of the Flamingo 1945 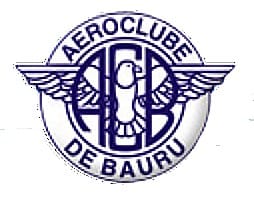 In the 1940s, Hendrich Kurt, a young German, fled World War II.
The musician and talented craftsman hated the war, and took
refuge in the quiet capital of the Terra Branca, just when local
aviation enthusiasts had opened. an air club in the city. Kurt was
enthusiastic glider pilot from his military training in his home country
of Germany.
He liked Bauru’s topography and climate and took up residence in 1942. The German, who was an unforgettable character in Bauru Aeroclube’s most curious stories, arrived in July, carrying in his luggage the construction plans of a Zoegling glider and a Swiss passport.  Kurt wrote to his brother-in-law, Swiss designer Hans Widmer to come to Bauru to help him with the project of making the city a centre of Sailing Flight and together Kurt and Widmer began making gliders. Initially, the small gliders were towed by a car, but, shortly the wood and canvas gliders began to be towed by small single-engine airplanes, being released in free flight at a height of about 500 meters.  In 1944, in the workshops of the Bauru Aeroclub, under the guidance of Hendrich Kurt and Hans Widmer, the “Flamingo” glide was built.

The following notes are from the VGC Archives by Chris Wills 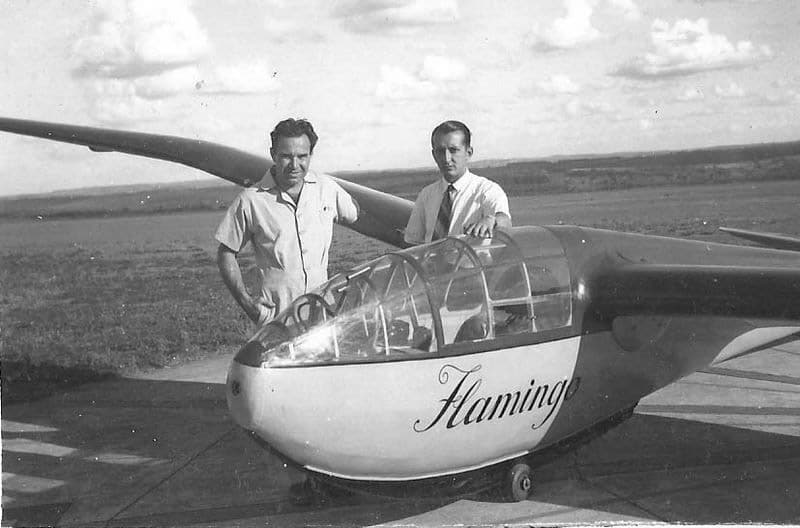 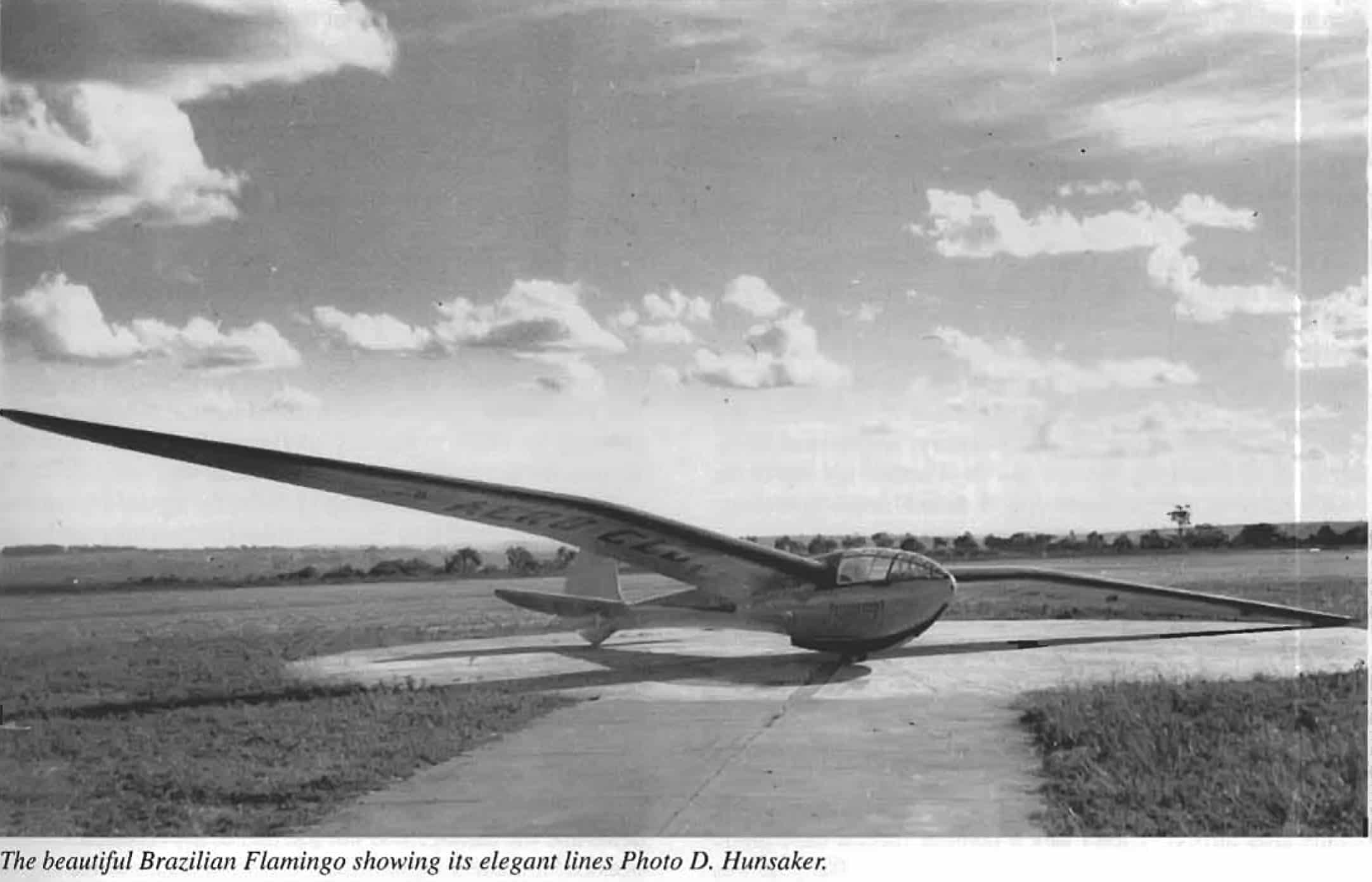 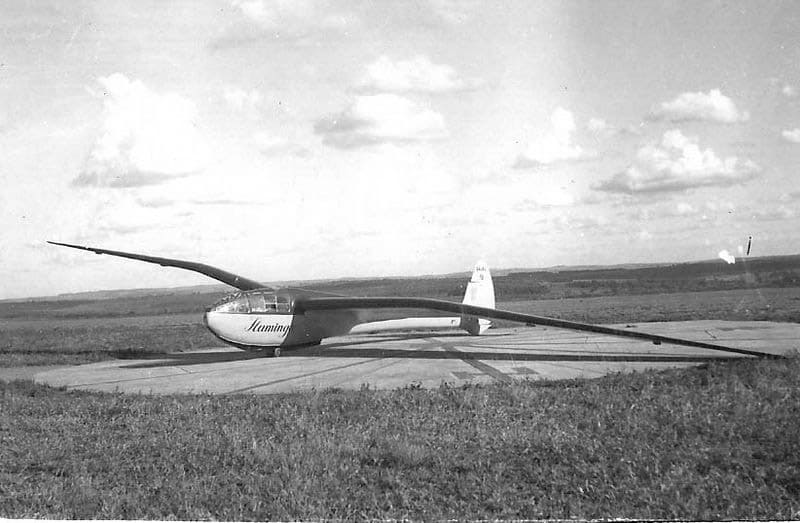 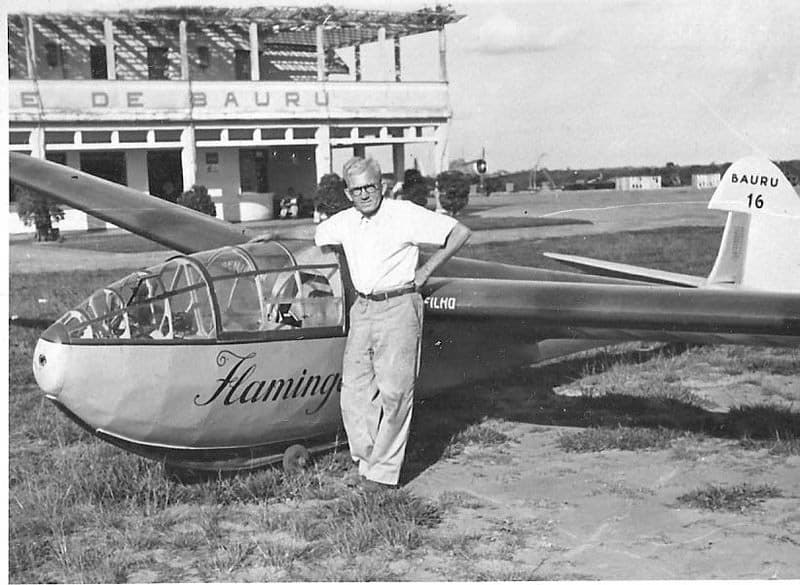 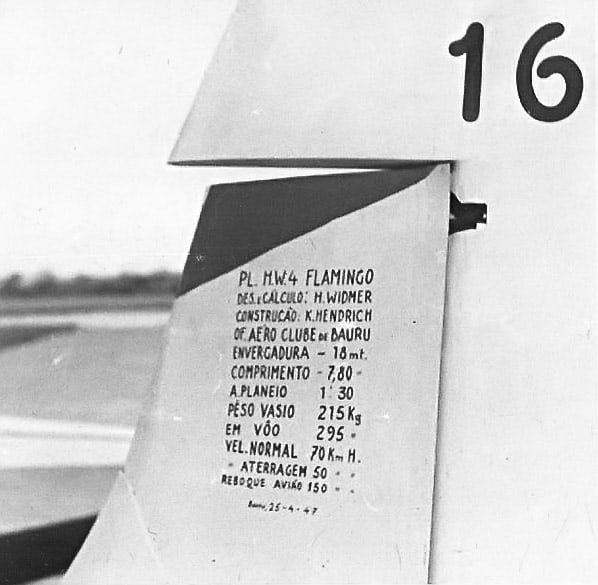 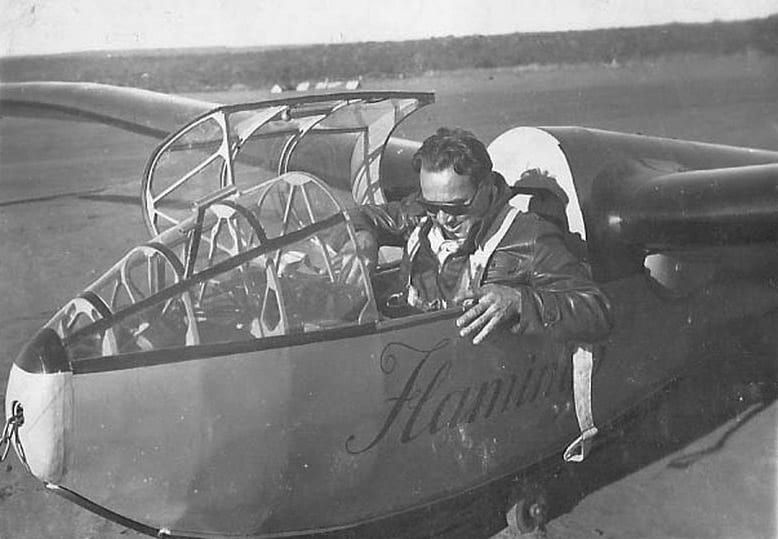 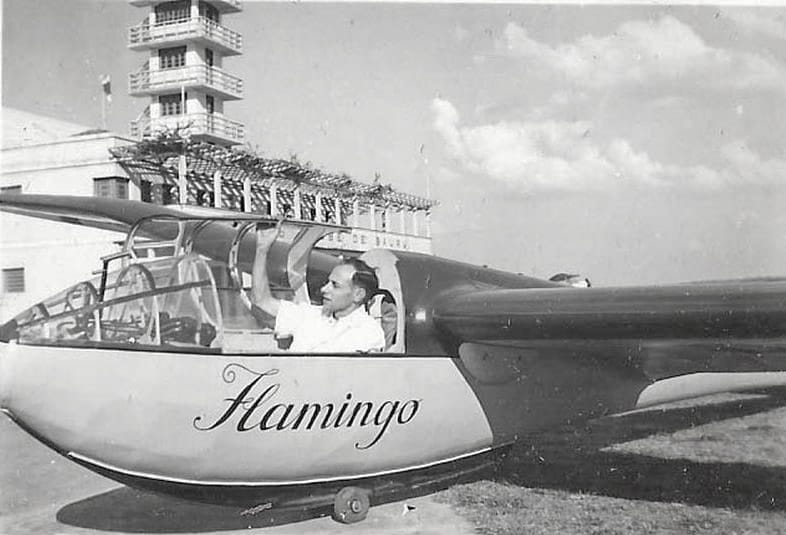 This is a strong Brazilian entry for the most beautiful glider in the world contest. (CW) It
was designed by Kurt Hendrich and built by Hans Widmer from 1944-1946, using Brazilian woods. These two Swiss emigrants really did a tremendous amount for
Brazilian gliding. They also built a Spalinger S.25 h, which was the final Spalinger
design that flew. Evidence of the S.25 h’s influence can be seen in the “Flamingo’s”
tailplane, elevateI’, fin and rudder. The “Flamingo” was originally called “Flamengo” for some reason. The 3-view drawing has Spanish written on it. and not Portugese, which is the language spoken in Brazil. The “Flamingo” was painted red and yellow with a brown (or black? CW) cheat line between them. It flew well and had a fantastic slow speed performance and climbing ability. It was still taking part in contests in the late 1960s and had his cockpit canopy much modified from the original, It also had its skid removed and replaced by a landing wheel. We understand that it is now being restored to airworthy condition and we hope that its canopy can be brought back to something of its original form.  The “Flamingo’s” original registration was PP-24. Later, gliders received only registration letters, like aeroplanes, so the “Flamingo’s” registration was changed to PT-PAY 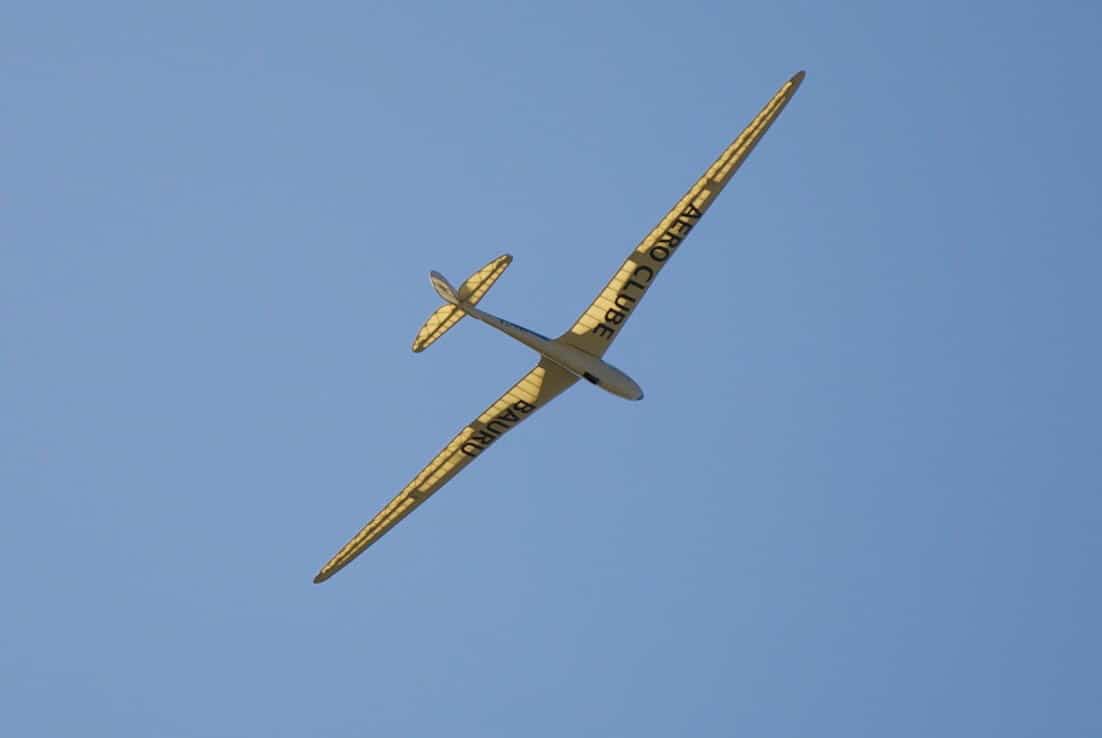 It had no serial number because only one “Flamingo” was built. To certificate the glider, it received an ‘official’ serial number from the authorities.
Every glider at that time had to have such a number. The number for the “Flamingo” is CTA-02A-123. The letters CTA, came from the branch that was supposed to certify everything that was flying at the time.

The Flamingo originally had a 6 pane horizontal canopy using flatU pieces of Perspex.  Later that was removed in favour of using a blown canopy with the obstructive frames removed. Under the wing of this early Flamingo was written “AERO CLUBE BAURU” as shown in the following picture of a model
The update to the Flamingo mentioned above turned out to be somewhat of an ‘ugly duckling’ compared to its former self, but make up your own minds from the following photos. The whole canopy outline was removed and replaced by a shorter lower profile canopy. 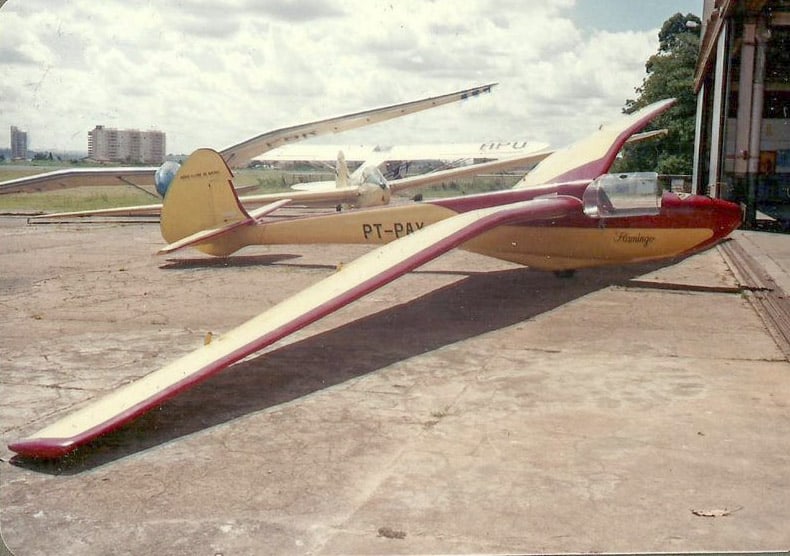 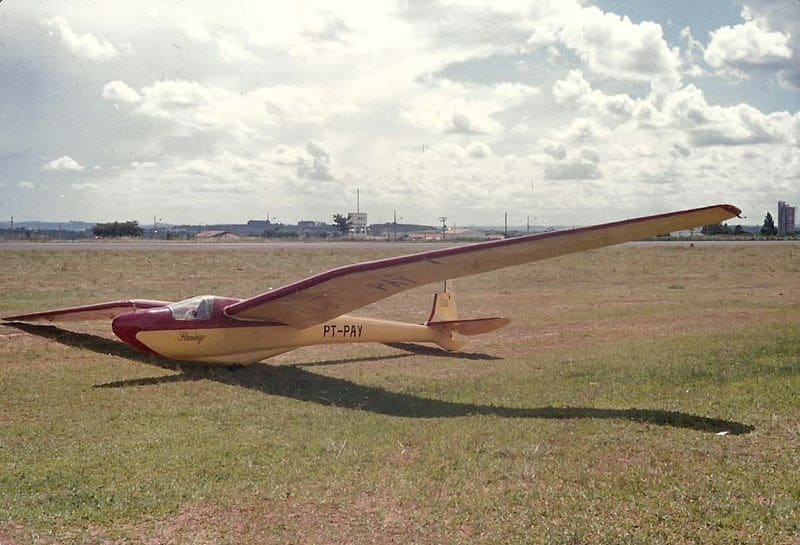 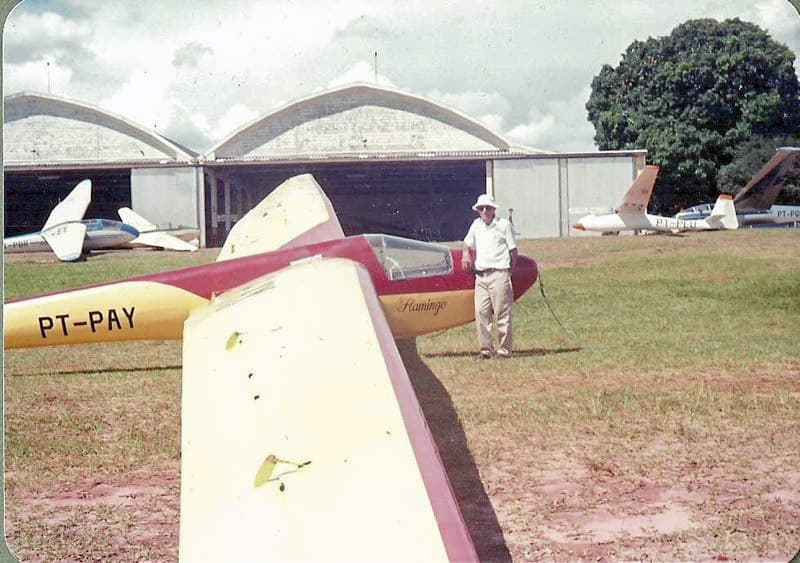 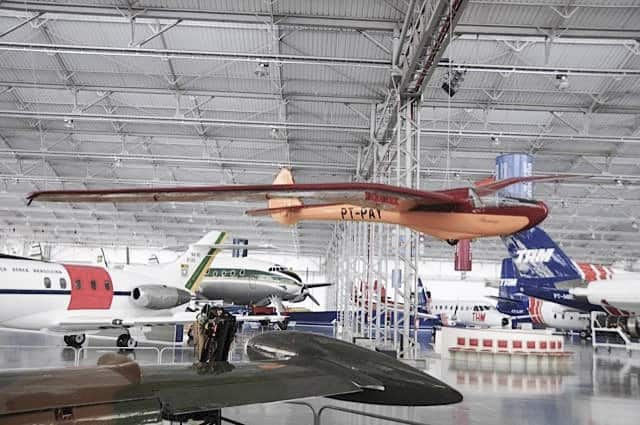 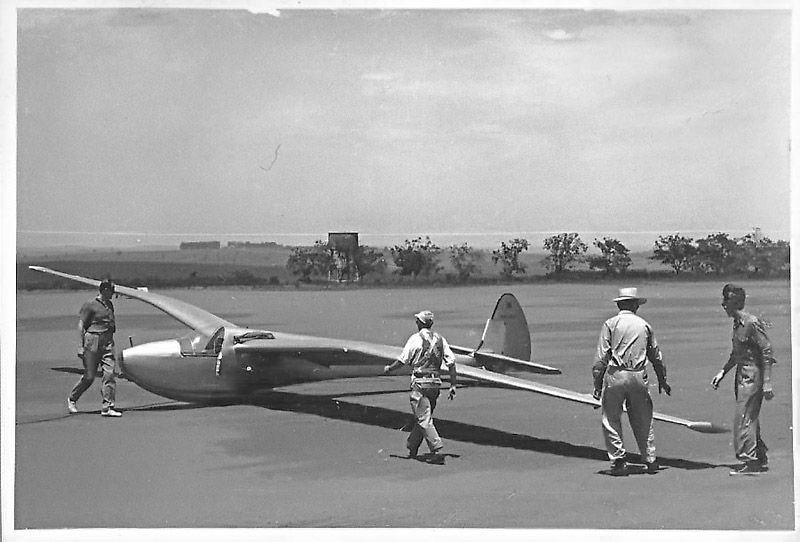 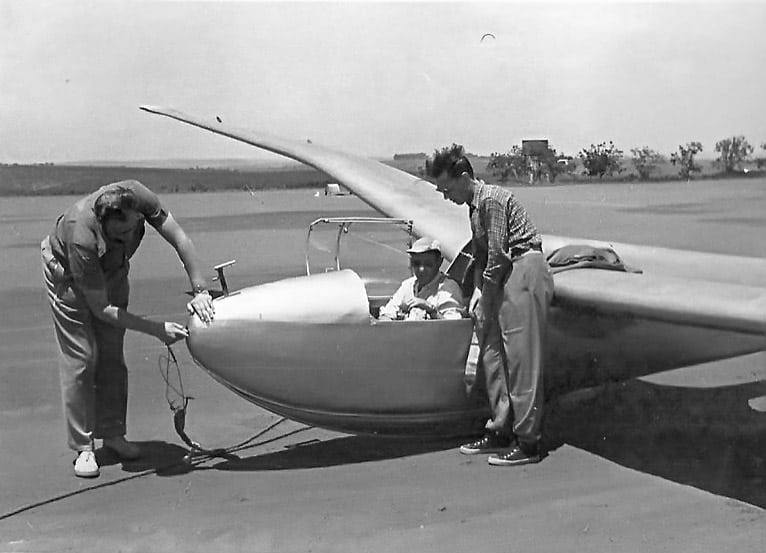 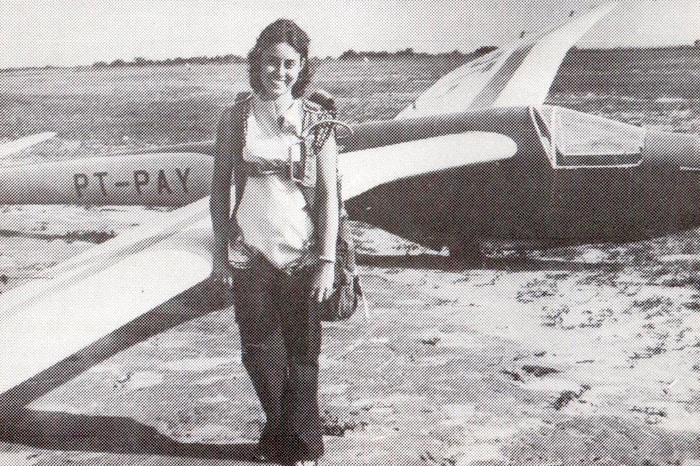 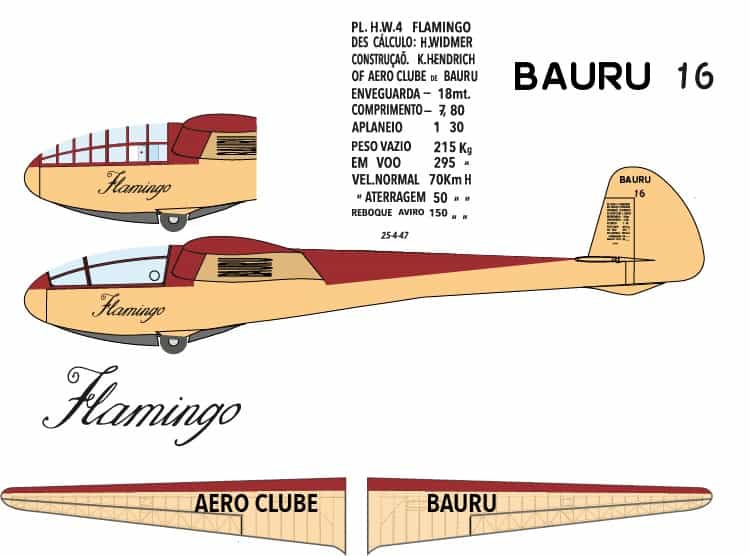 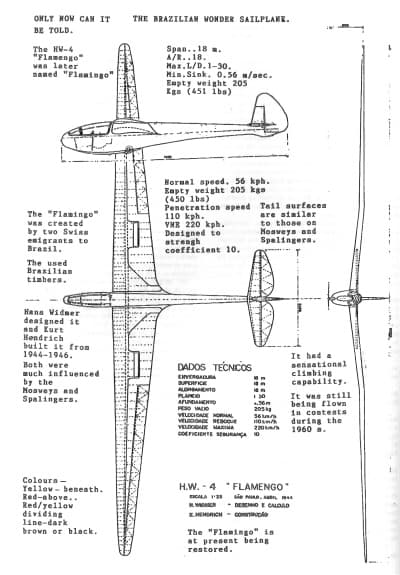