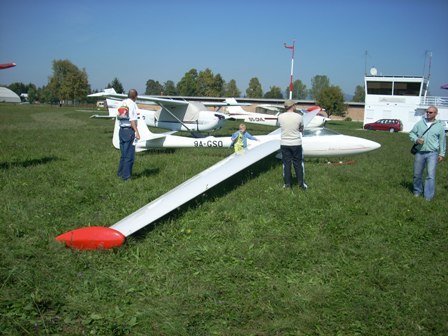 The Ikarus Meteor is a long-span, all-metal sailplane designed and built in Yugoslavia in the 1950s. It competed in World Gliding Championships (WGC) between 1956 and 1968 and was placed fourth in 1956; it also set new triangular-course world speed records.

The Meteor was designed by the same duo, Boris Cijan and Stanko Obad, who had produced the Orao glider which had achieved third place in the 1950 WGC. They were aided by Miho Mazovec and generously funded by the Yugoslav government. The result was “… without doubt the most advanced sailplane of its time.” In 1955 almost all gliders had wooden structures, with perhaps a few unstressed GRP parts; in contrast the Meteor was all-metal, with a large, 20 m (65 ft 7 in) span and an aspect ratio of 25, values beyond the reach of wood. The optimum glide ratio of greater than 40:1 was good, 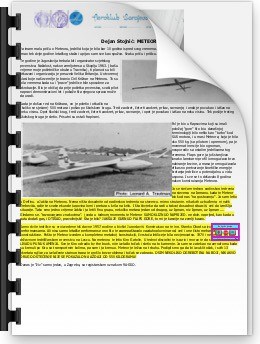 but the high inter-thermal glide speed was exceptional.

The Meteor was one of a group of mid-1950s gliders to use the NACA 6 series laminar flow airfoil first adopted by the Ross-Johnson RJ-5, which required careful attention to profile control and surface finish. In plan the wings are straight tapered with unswept leading edges and forward sweep on the trailing edge. The wing tips carries small, elongated bodies termed “salmons” to dampen tip vortices, as on the slightly earlier Bréguet Mouette and has a constant 2° of dihedral. Completely metal-skinned, the wing is built around a box spar within which the thickened skin is internally stiffened with span-wise stringers. The whole trailing edge carries control surfaces; the outer quarter with conventional ailerons, and the rest roughly equally divided between narrower inboard ailerons which droop together when the final inboard section of camber changing flaps are depressed through as much as 20° for low speed flight. These flaps can be raised by 11°, reducing the camber for high speed flight. Schempp-Hirth type airbrakes are fitted at mid-chord, just aft of the box spar at about one third span.

Above Photos available from Airliners.net

The Meteor has a pod-and-boom style fuselage, with a long, single-piece canopy above the upper fuselage line, forward of the wing, under which the pilot sits in a reclined position. The under-wing, retractable monowheel undercarriage is assisted by a short, retractable, forward skid. Retraction is manual; there is a wheel brake. Behind the wing the fuselage has a circular cross-section. There is a long, shallow fillet or sub fin between fuselage and fin, both straight edged, and both rudder and fin extend well below the lower fuselage line to form a tail bumper. The rudder is horn balanced. Later revisions slightly increased rudder area. The high aspect ratio, straight tapered tailplane is mounted above the fuselage on the fillet forward of the fin’s leading edge. The elevators are also aerodynamically balanced and originally carried a ground adjustable trim tab, later removed.