How to launch your Scale Glider

There are several methods available to get your prized model into the air depending on your terrain and the availablity of other helpers. Below I have gathered together information to allow you to choose what is most appropriate to yourself. The favoured methods are:-

Aerotowing – by being pulled into the air using a powered aeroplane
Winch Launching – by attching the glider to a line which is reeled in at high speed
Bungee (Elastic chord)- which is stretched in order act as a catapult. Originally used in the early days of fullsize gliding
Hand Launching– by throwing your glider in a flying position into rising air on a hill top
Self Launching– the glider gets airborne by using an onboard electric motor and propeller 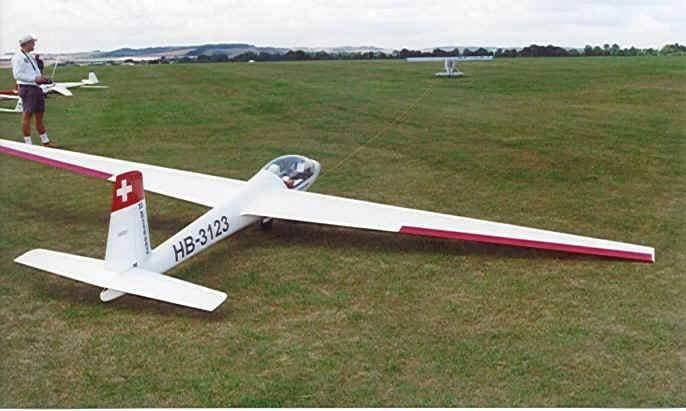 Frank Oeste’s Swift, about to be aerotowed behind a Wilga tug at Middle Wallop

involves towing the glider up behind a scale tug to a height of typically 500 feet or more, then using the release mechanism (a hook in the nose of the glider) which “lets go” of the wire between the tug and glider. A bit like the AA! A number of club members have their own scale tugs, most of them at similar scales to the gliders – 1/3 or 1/4 which makes it look very realistic in the air! Aside from the fun and look of it, aerotowing is great because you can get the glider to an exact height and position (more or less), which makes it easier to run competitions in a way that is fair to all pilots. Aerotowing can be done from most sites, flat or hillside, but at some sites power-models are banned (noise reasons, usually).

SMOOTHING OUT THE TOW

The Towline length is really a matter of what you prefer, or indeed what you feel comfortable flying with. I can only report my own findings, and subsequent preference, on this subject. However, it does seem pretty obvious really. Let’s say, for example, you are using a short line with a fast powerful tug up front, controlled by a pilot who likes to fly fast-and-furious all the time. In addition imagine that he is not too concerned about what’s happening to you on the back (he keeps telling you to ‘watch out!’ and to ‘keep those wings level!’, etc!) If this happens to you, then you could benefit from (a) either trying another pilot, or (b) better still, a longer Tow-line.

A 120ft length of line is an ideal place to start. If you do, include a one metre bright red line-marker as well, positioned about one metre out from the nose of the glider. Also, attach different types of nose hooks at the glider end, using snap loops – it is most unusual to find a club where all members use exactly the same type of glider-release on every machine. The first thing you will notice is just how much slower the back end rock’s and roll’s: using a longer line really does dampen it all down!

Here is another good tip to smooth out your Tow. Try fitting an Ikarus miniature wing Gyro (available from J. Perkins Etc. priced at around £55) in your glider. People , watching your attempts at towing always ask afterwards: “Hey, how on earth do you manage to tow so easily, whilst keeping the glider so steady?” Well, the secret is this – if you have a scale glider with two aileron servos fitted, plug them into this tiny Gyro unit. Then, plug the gyro servo lead into your Rx, Remember, it is advisable to switch the rudder out before you launch your glider on tow. Just take off as normal, and get into a good position right behind the tug i.e. tow-line taught and straight out, and glider wings level. Next, switch in the Ikarus wing gyro, and there you have it – at long last, effortless and smooth rock steady aerotowing! This amazing little gizmo will automatically hold your glider bang-on station right behind the tug, with the model’s wings kept level all the way up! It’s so simple -try it, and you will wonder why you never thought of it before!

is quick, quiet and effective. This involves a small winch (powered by a car battery) winding in the tow line to provide the airspeed necessary to get in the air and climb. It is operated by the pilot himself, which is made possible by a foot pedal. The winch that we use will automatically adjust the speed to keep a fixed tension on the wire, which means that it can be used for many sizes of glider – from the light (and fragile!) to the heavy 5 or 6-metre glass fibre ships. Winching is normally done from flat sites, but is possible from the hill side, depending on the steepness of the terrain.

Launching a Scale Glider on the Bungee

By Chris Munden
First of all I would like to thank Vince Cockett and the Southampton Soaring Society for inviting me to write a small article on the subject of scale gliders on the bungee. The September 2003 edition of RCMW will contain an article on this subject but not in so much detail as it is aimed at a slightly different audience.
An early glider being launched by bungee. This method can still be seen in use today with the Midland Gliding Club 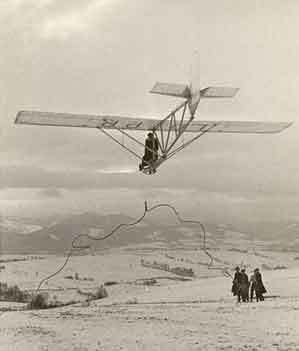 The recipe for launching a scale glider successfully on the bungee is weight, wing loading and to a lesser degree, wings span. The other essential ingredient is a breeze.

There are two common sizes of bungee tubing (surgical latex tubing) available. One is 8mm in diameter and the other is 10mm in diameter. The 8mm tubing is generally regarded as the ‘standard’ bungee and will launch a glider of up to about 4lb AUW with a maximum wing span of around 2.5m. The 10mm bungee will or should launch a glider up to 8lbs AUW with a maximum wingspan of around 3-3.3m. (These weights are conservative estimates; lighter gliders may do better). A 1/4 scale glider is the largest scale that I would attempt to bungee provided it fits the weight criterion. A 1/5th or 1/6th scale should be ideal.

In the full size world of glider launching, aerotow is now the most popular, however, winch launching is still carried out at many clubs and in effect, bungee launching is the same principle.

I was lucky enough in my days of full size glider flying to experience auto tow launching, this was behind and old 3.8 Jag down the runway of an RAF airfield. It was also of the reverse pulley system where the Jag drove towards the glider. If you require more details, get in touch through my e-mail address.

If you have a ‘small’ scale glider of say up to about 3m span and less than 5lb AUW, try fitting a ‘removable’ tow hook. I suggest you fit it at about 4cm in front of the CG. My own removable tow hook on my S2G ASW-19 2.2M span glider has a block inside the fuselage where I can screw the tow hook into 3 different positions depending on wind speed. I have also fitted a mini aerotow release system to this glider but it needs a launch trolley for launches off the ground.

If you wish to be very authentic and you have the room, try fitting a servo operated winch tow hook. The beauty of these is that they are concealed and not proud of the fuselage just like the full size counterpart. One word of warning, the system must be 110% reliable and you will need to be on the ball if an emergency release is called for. The one advantage this system has over the standard tow hook is you can release almost at any time. It will be quite critical as to where you locate this system in relation to the CG, so plan it with care.
John Watkins has some very good detailed drawings of how to make a servo operated tow hook.Word of warning some aerotow release systems may not be robust enough for bungee or winch launching.
Back to the bungee system, for gliders that fall into the category of ‘standard’ bungee, you will need a nylon monofilement fishing line of about 100-120m in length at about 60lb and 30m of tubing. For gliders that fall into the 10mm-tubing category, everything stays the same except the line needs to be around 100lb. (Not every fishing tackle shop sells this strength of line but most sea tackle shops should). The standard bungee should be stretched for at least 60 paces and the pull can be quite strong. It is wise to have a helper hook up and launch for you. The 10mm bungee should also be stretched for the same amount and the pull at this stretch can be very powerful. You may need 2 helpers, one to hold the glider, and one to attach the line 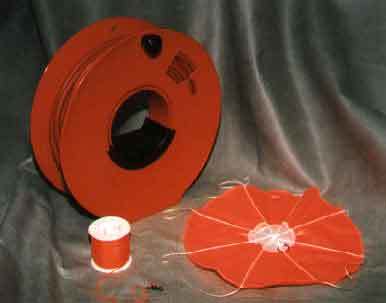 Remember that the climb can be disappointing if there is insufficient wind. With a good breeze, your small scale glider should zoom up the line and if all thing are equal get to at least 400ft. As there is no polyhedral wings on scale gliders generally, you will need to be on those aileron controls in case corrections are required. It is best to have your aileron rates on and your coupled rudder off on the launch. If your model is well trimmed and is launched directly into wind, it should go up the line without much input. The wings will bend upward into a dihedral and this will give it stability on the line. Those who have a gyro fitted may find it better switched off (if you have that facility) during the launch.

Launching scale models off the slope can sometimes be a bit of a handful in windy conditions, especially with larger scale models. It is also nice to have a friend at hand who will do the launching for you, but if flying by yourself, here is a way to get your model airborne safely.

Basically, this requires a length of surgical tube to make a catapult to launch your glider. It is important that the glider attachment is built into the nose of the glider and NOT at the winch position. Here are two similar systems to take a look at to give you some idea as to how to make your own.

by Vince Cockett (this page is under construction)

After discussing with a fellow modeler about the use of a bungee chord to launch heavier gliders off the slope, I have made this page for you to see what system I have used with great success. The construction is self explanatory from the photographs, but I later found out that a pin which I made to insert into the glider can be purchased ready made from fishing supply shops for a little more than £1.

This system leaves no permanent hooks on the outside of the glider to interfere with the scale outline and on my model the same hole doubles up for a standard sliding pin release mechanism for aerotow. This is achieved by simply reversing the aerotow release servo so that the sliding pin is permanently open and away from the entry hole.

To launch the glider, stake out the bungee chord for maximum stretch, with the retract wheel down, attach the glider to the pin, ensure the wings are held level and stamp on the pedal . With this system there is no pressure on the glider until the pedal is actually depressed to catapult the glider off the slope. Because of the angled reward facing glider installation, the pin easily slides loose at the end of the launch. 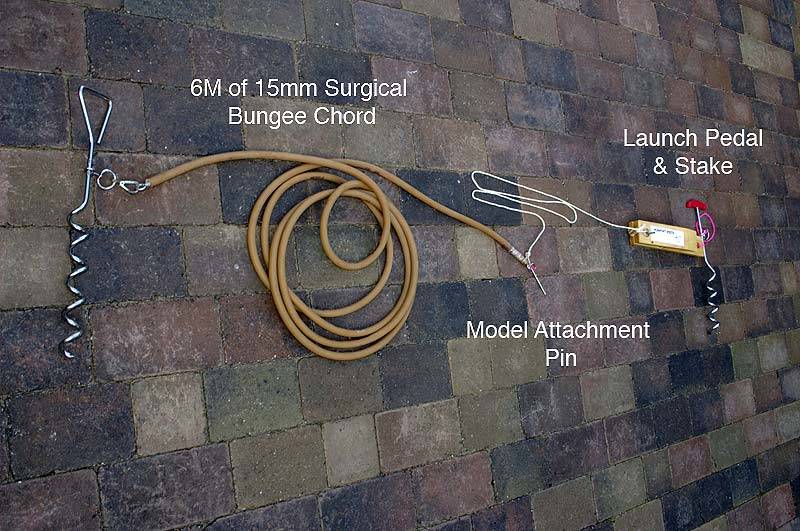 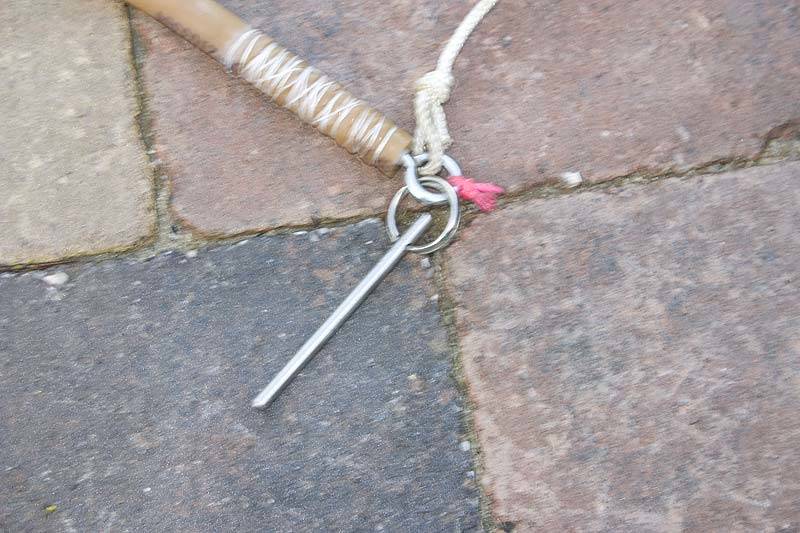 Connecting pin from the surgical tube to the Glider 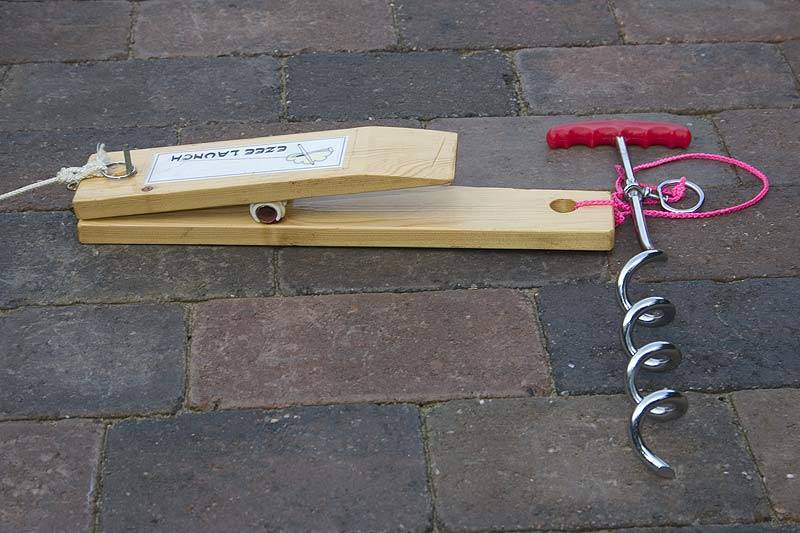 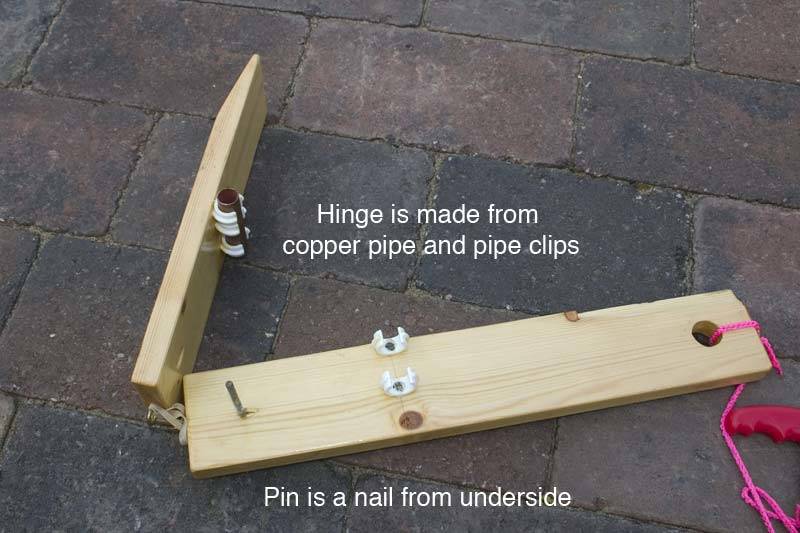 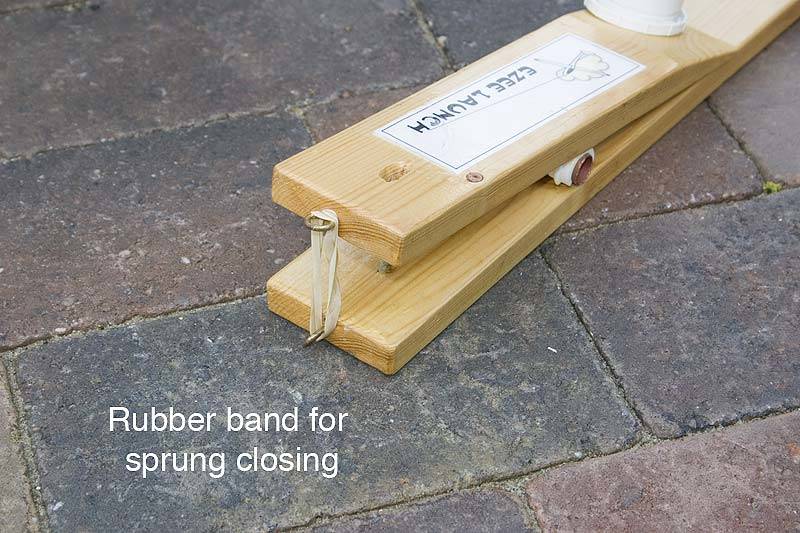 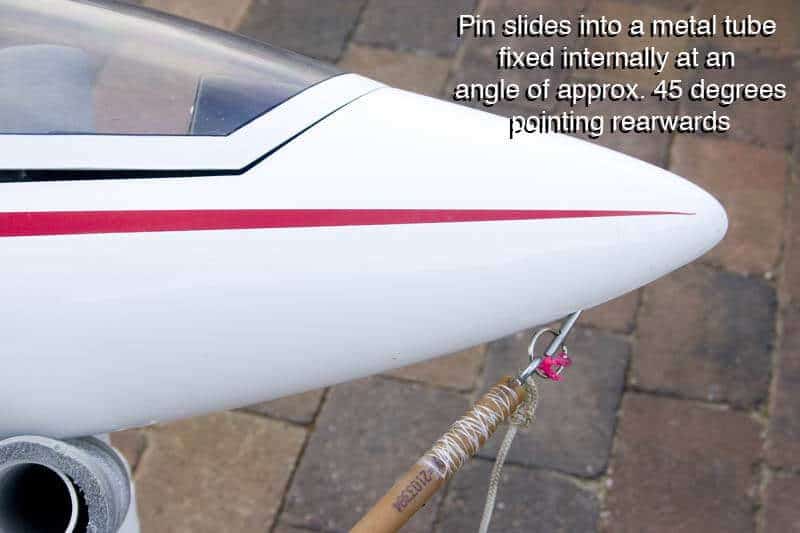 Method of attachment to the Glider

This is the launch system used by John Watkins who had to find a way to launch his gliders following a medical problem or loose his hobby.