People are joining and then emailing me to ask for plans. We do expect you to contribute to the community before being granted this option. I have added a section to the rules of the forum to cover this.

Lovely Simon.
I look forward to seeing it in action.
Top

Re-painting of top surface of bad wing seems to have worked, which is nice 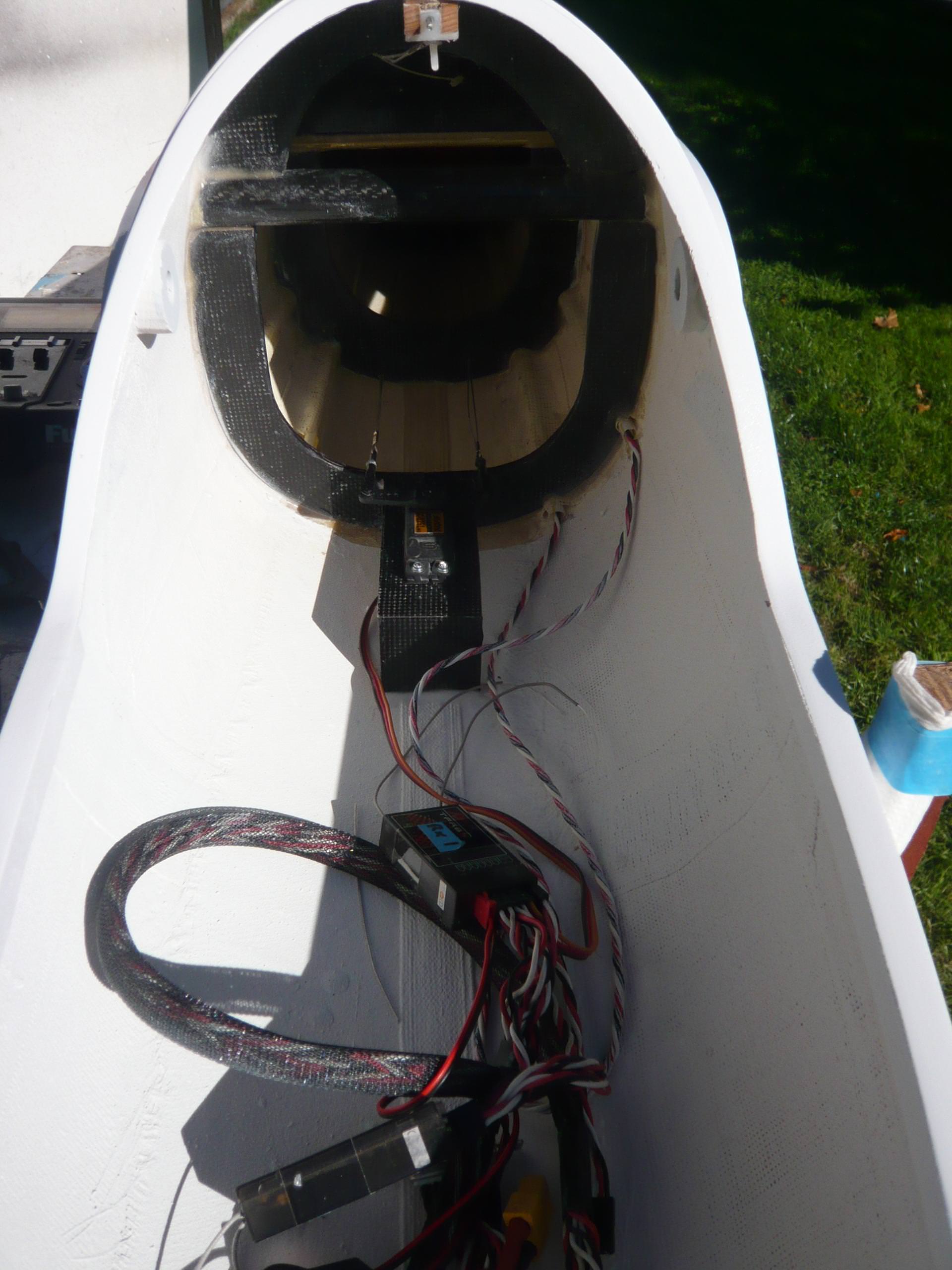 We have a rudder! 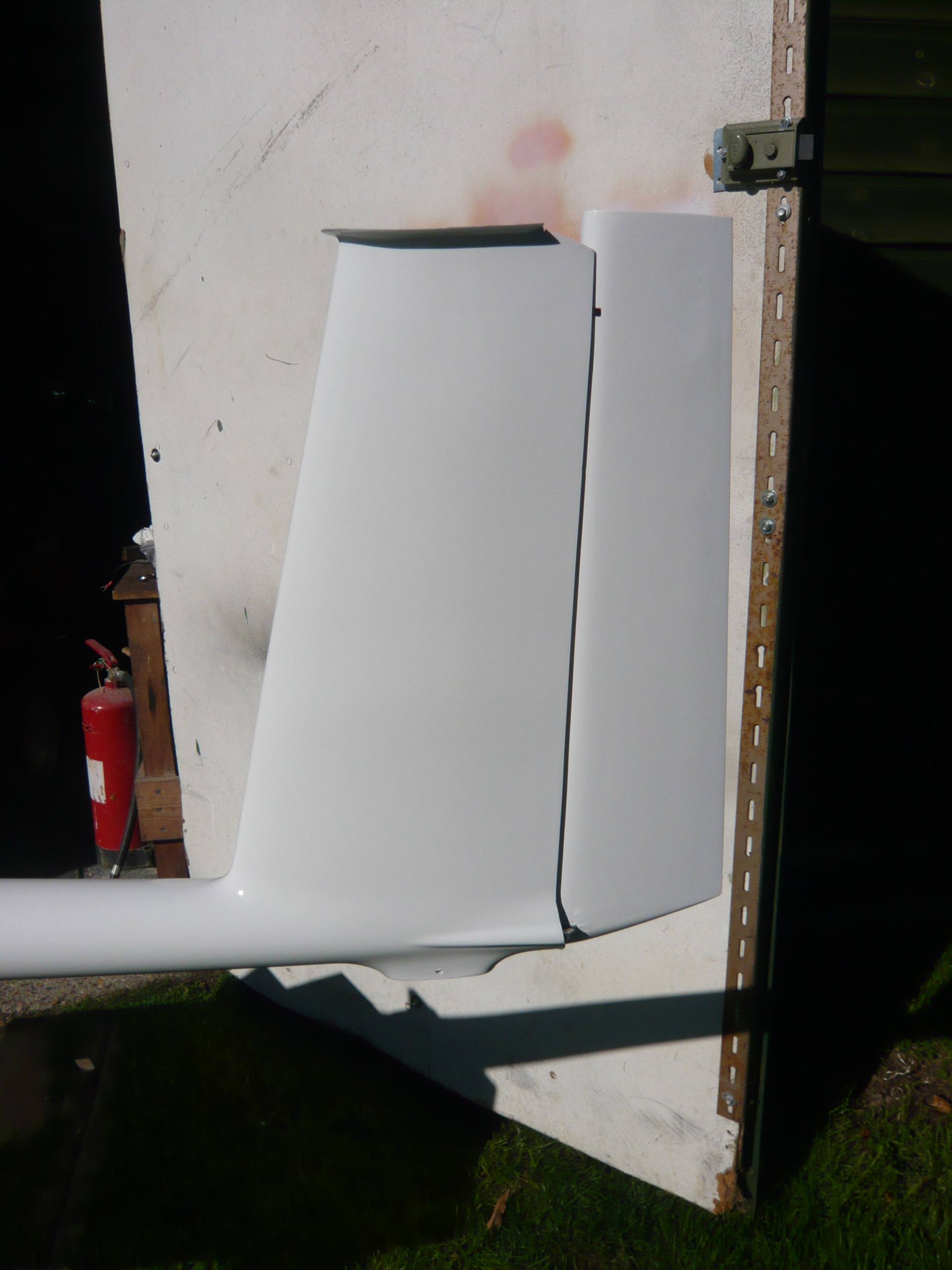 Tailplane on and we have all control surfaces working 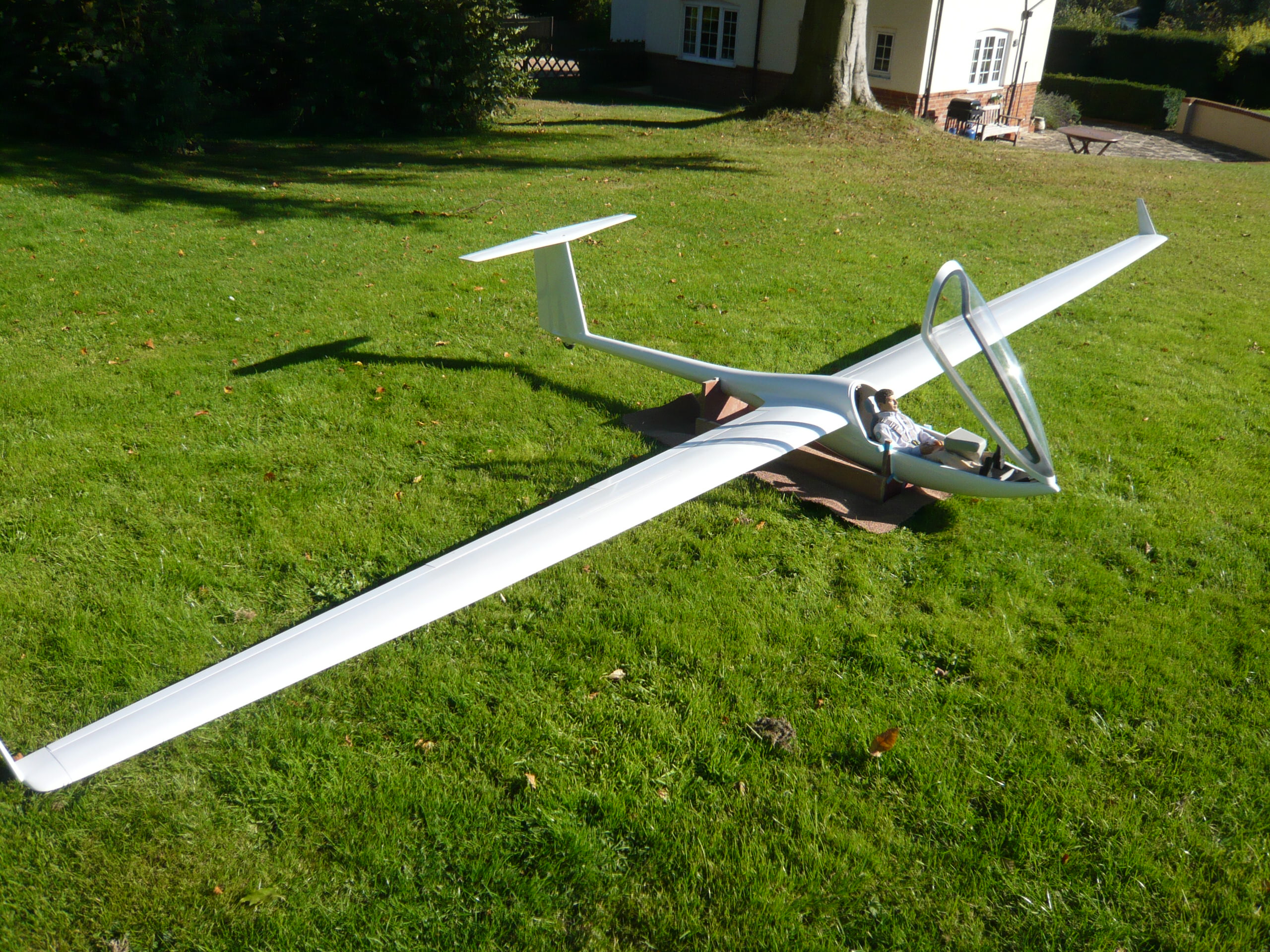 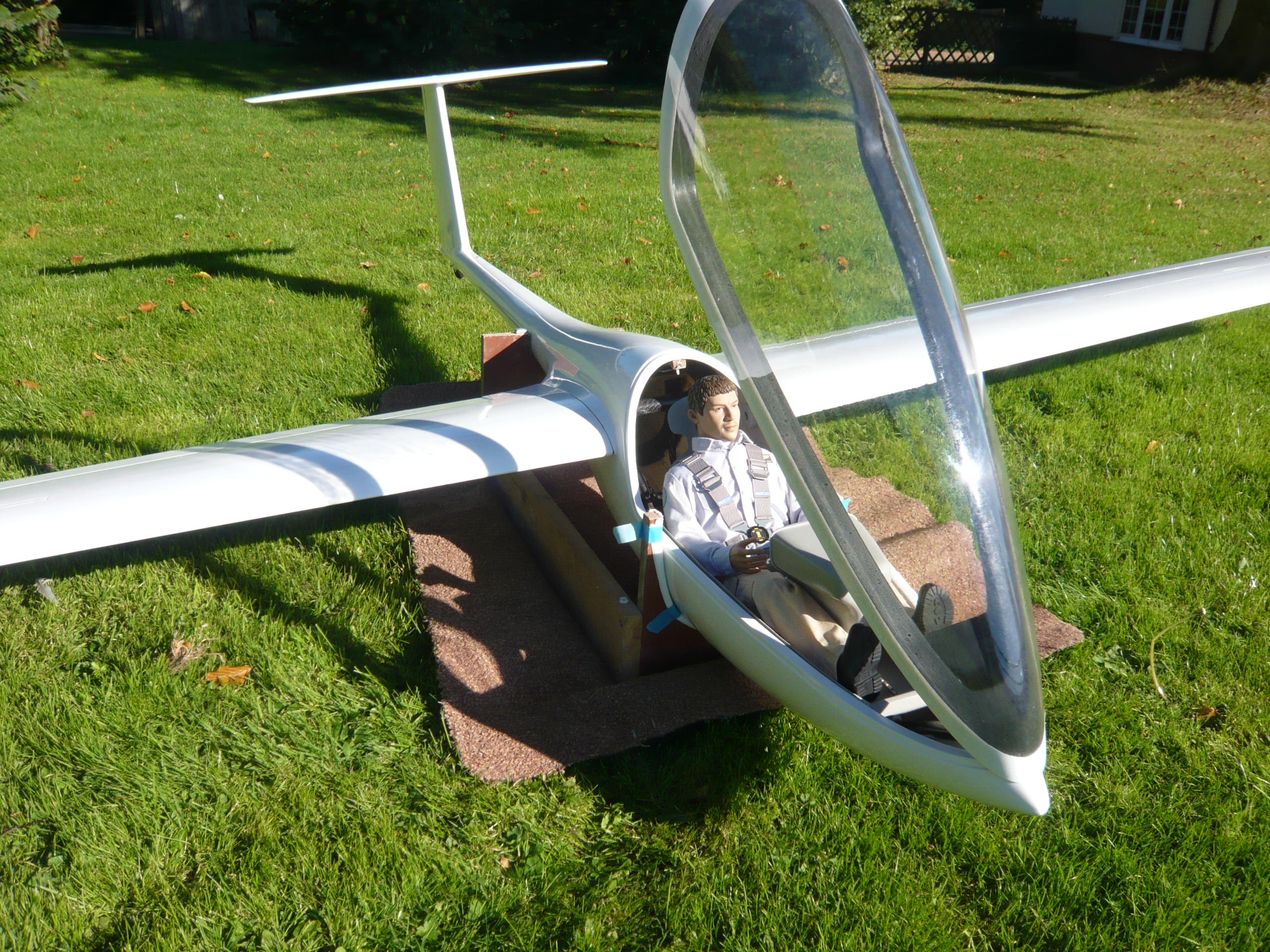 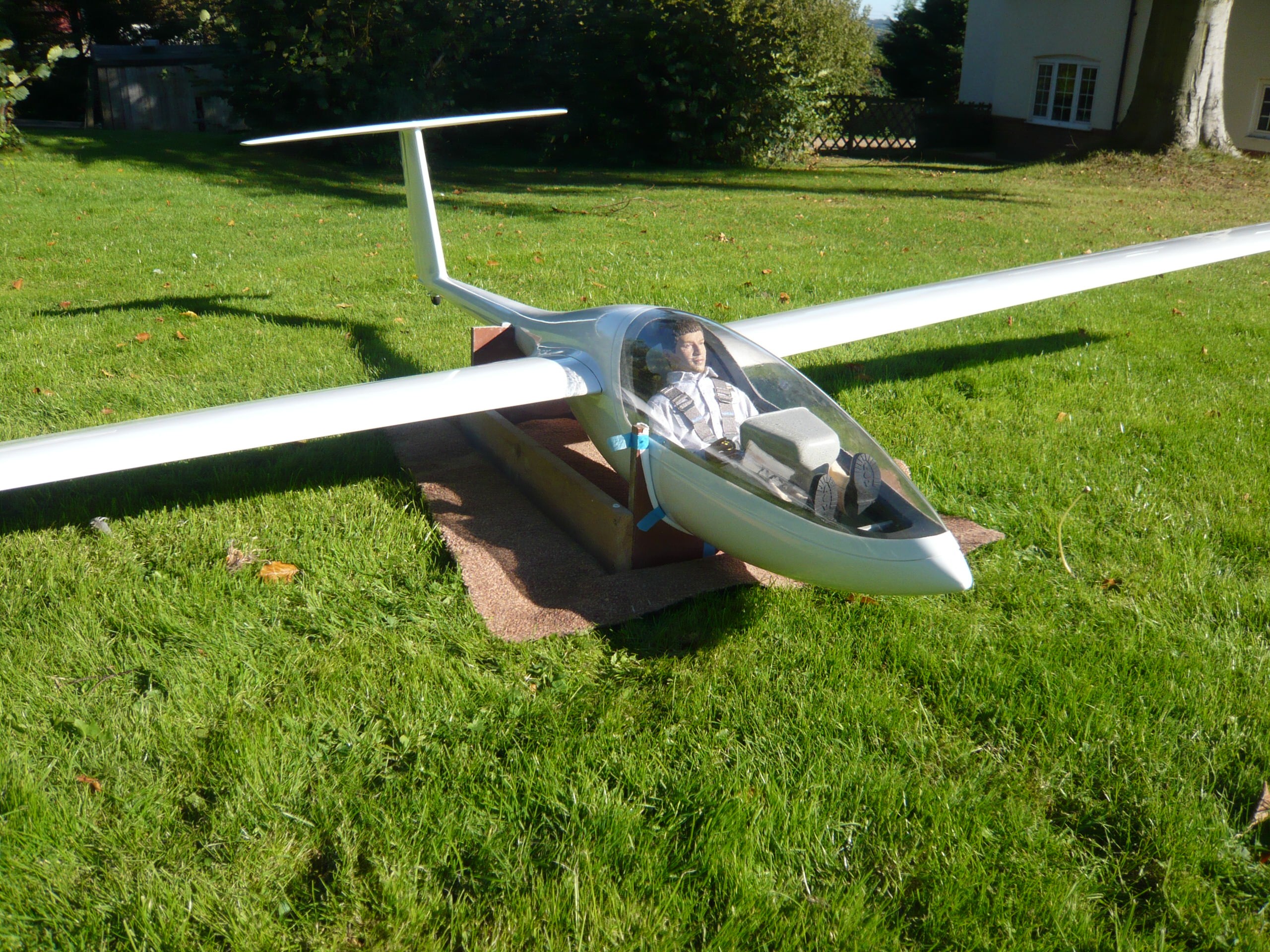 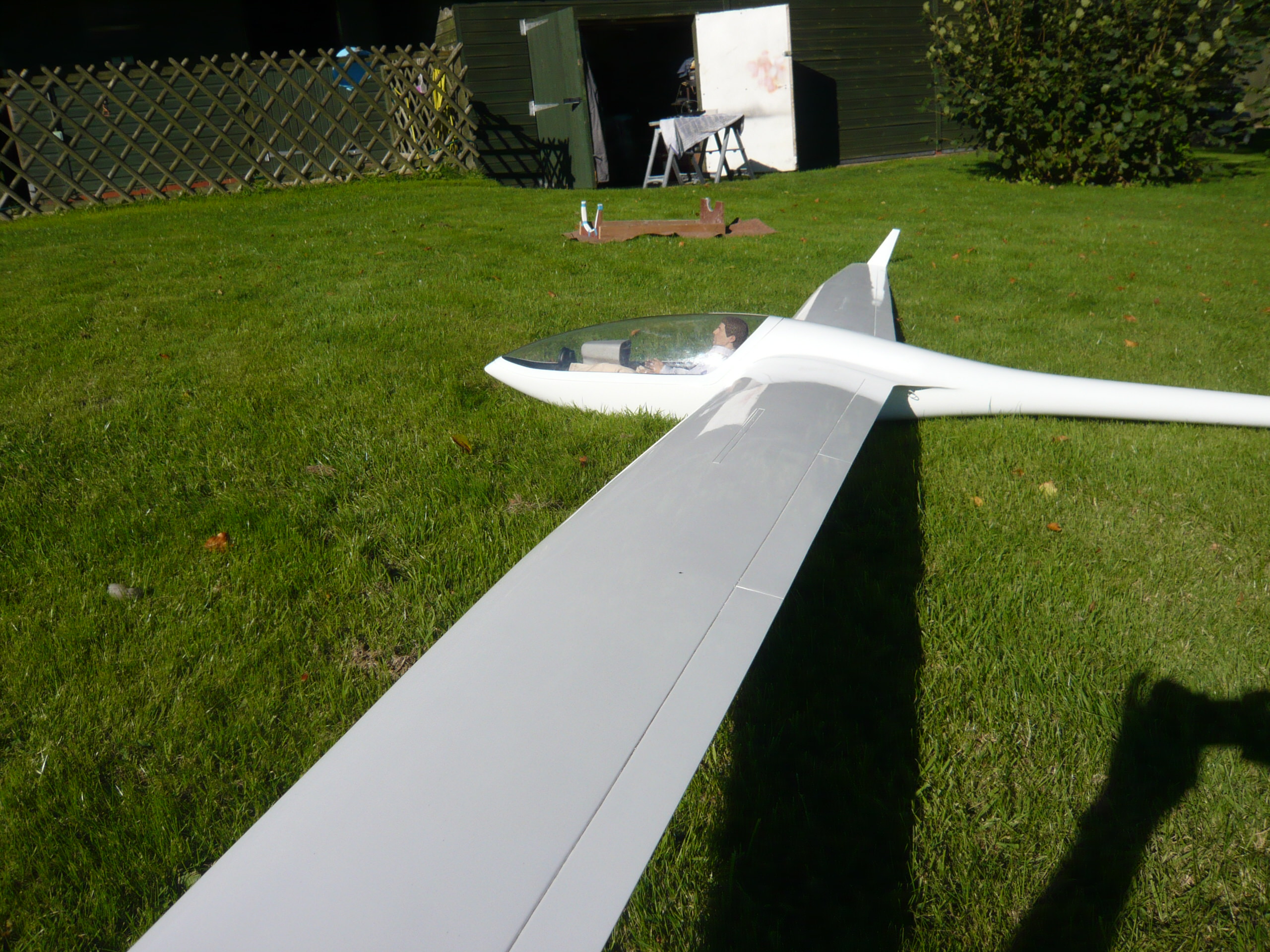 Nothing like as big as my ASG29, but still quite large! 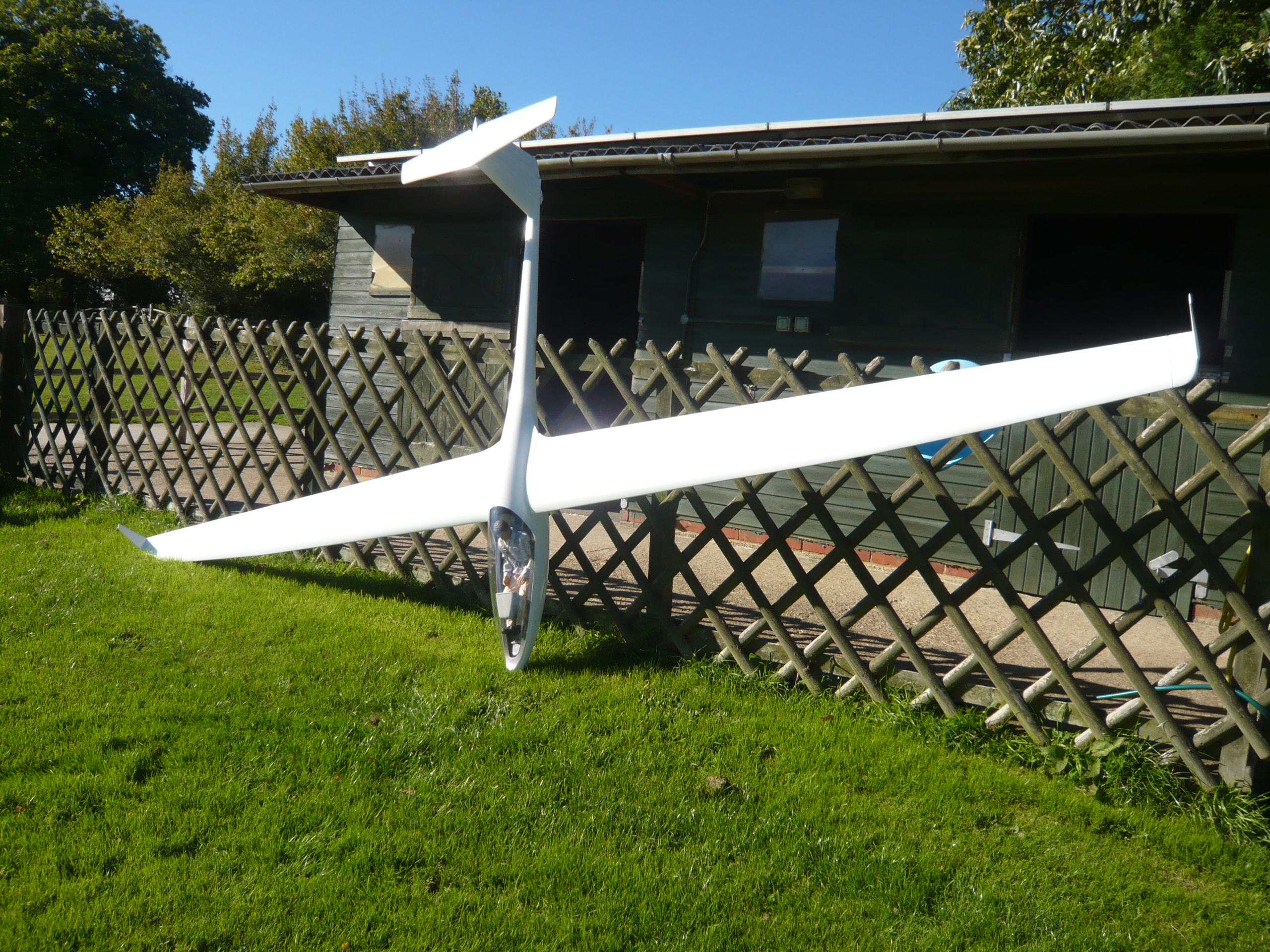 Talking of large, it is quite lardy - currently 12 Kg but lord knows how much lead it'll need in the nose?...
I will ask Terry and Paul where I should set the cg and then start ordering tons of lead shot. 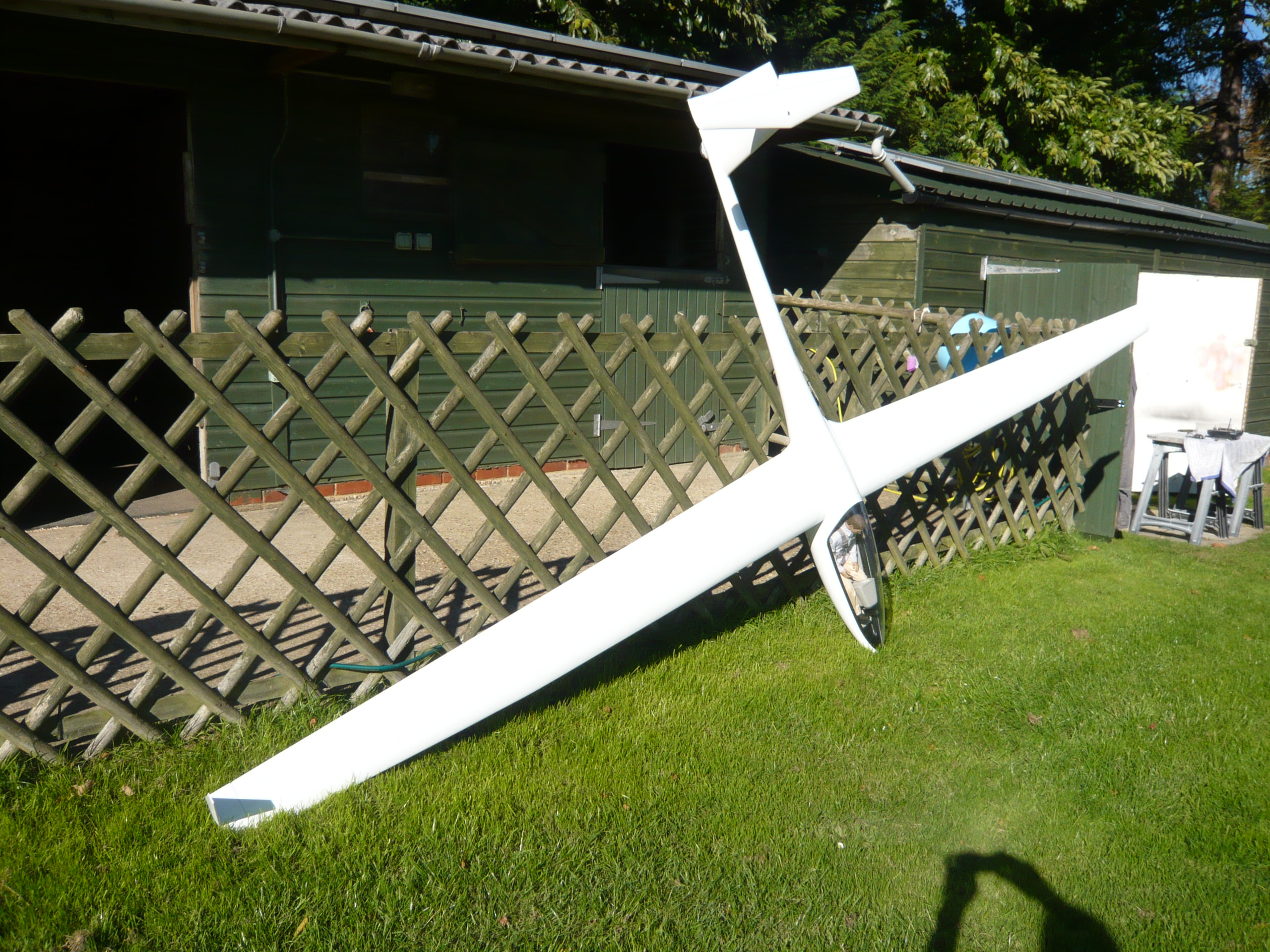 I think Paul said his was about 14.5 Kg so hopefully I'll be in the ballpark with you guys if I don't have to put too much nose weight in.

Hi Simon,
Rick and I always envisaged that the DG 800 would perform at its best at around 15kg plus on the slope, in a medium blow due to the wing plan form giving it a large amount of wing area. (Check it out from the pic by your fence). So I would say you are smack on track pre nose weight at around 12kg + It May even need ballast on the C.G.later (knowing how you would like it to perform

) . Both Paul and I fly with 1klg of ballast placed on the C.G.of our Salto's to get them to penetrate through the aerobatic maneuvers.

It appeared to me (after watching Paul's vid over and over again) that after racing across the slope when it was turned into wind lost too much of its momentum.
This is not a criticism by any means, It was after all the models maiden flight and Paul has yet to get used to its handling. Simon C told me they both were flying it with a considerable amount of up elevator the whole time because of a too forward C.G.which I am sure had a lot to do with it. However from the discussions I have had with Paul and Simon together with the short video they produced it seemed to show that more weight could easily be carried with no ill effect.

Your model looks just stunning Si. Please invite me to the maiden,Regards Terry

P.S. I just new you would strip and respray that wing,I just new it, wish I had,had a bet on it.

P.P.S. Simon Cocker will be writing about the said maiden flight in the next issue of R.C.M.E.
Top

Thanks Terry. Sure I'll invite you to the maiden but it's a long way for you and would probably be at short notice due to wind conditions etc.

Should I be aiming at balancing her on the joiner as a starting point? I need to work out how much lead I need to order...

Yes Simon, we placed the wing joiner where we expected the C.G. to come.Which on that chosen section was also at the maximum wing thickness. This allowed us to get the correct dihedral to the wings with a straight joiner bar.
I discussed this with Paul when he started balancing his and as we've noted it was a little nose heavy. Whether he added a little extra weight to be sure that it was not going to be tail heavy Im not sure.We will have to wait until he gets back from Vegas I suppose.(If he ever comes back that is,he said that when he has his substantial win he is going to settle in Beverly Hills. Paul the new Beverly Hillbilly. said he was going to fly from the Hollywood sign.

Simon WS wrote: ↑
28 Sep 2018, 10:31
Thanks Terry. Sure I'll invite you to the maiden but it's a long way for you and would probably be at short notice due to wind conditions etc.

Should I be aiming at balancing her on the joiner as a starting point? I need to work out how much lead I need to order...

Hi Si , I've got a shed load ,let me know how much you might need and I'll take it to Wallop if you can get it back
Top

That's very kind Geoff but I have ordered it from eBay now...

Hi Si , I've got a shed load ,let me know how much you might need and I'll take it to Wallop if you can get it back
[/quote]

If you have some spare I would like some. I always seem to be looking for lead in my kit to put in peoples planes when I test fly them and I am sure my next model will need some.