Repairs to a 5 Meter Scale Wing

The serious damage I did to my 1/3 scale “ASW:28” in France has resulted in many emails and letters asking if I was able to repair it? And if so, how do you put a long slender wing like that safely back together? The questions came in ranged from: “can a heavily damaged wing really be fixed up to be just as strong as before”? To “how easy is it to do a major repair like that”? and also “where do you start”? and “what kind of materials are needed”??

My answer is yes; in general most things can be repaired and fixed up ok. But of course it all depends on the amount and the type of damage your model has sustained! The 5M “ASW:28” hit hard on a wing tip snapping a wing in half as it cart wheeled at speed across a ploughed field. Causing a severe wing break right across the wing at the end of the twin airbrakes and right to the end of the ailerons.(See Photo)1- At the same time it also crushed in most of the foam around the jagged line of the wing break(See Photos) 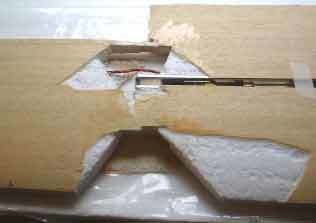 This photo shows the wing after all the damaged and crushed foam plus the veneer had been cut out and removed note the FG leading edge has also been removed. 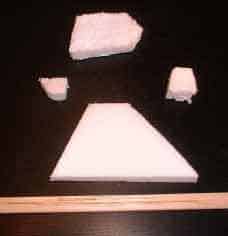 This picture shows the new sections of replacement foam shapes and the new hard balsa leading edge being prepared. The foam inserts are cut out roughly to shape, perhaps just a little oversize so that they are a tight fit when epoxied in place. 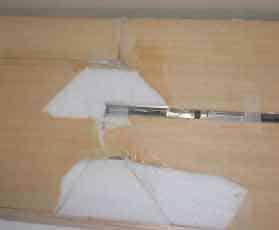 OK you’re quite right. Yes, it is a messy job to do, but believe me it can be done! You just have to work at it carefully and methodically and also use the original negative foam wing blanks that the wing came in. These will hold the repaired wing in shape helping to also realign it correctly by getting it back into position.

I used glass cloth thoroughly wetted out with 24:Hr epoxy to repair the wings central FG glass spar if that has been damaged. (In the ASW:28 it had also snapped!) In addition I lay glass cloth right over the replacement foam inserts making sure that the new glass cloth overlaps the original glass skin that you expose by carefully pealing back the top skin of veneer. Doing this ensures that they FG cloth does overlap and it’s not just butt jointed! Remember also to lay plastic sheeting over the repaired sections to stop them from sticking to the foam wing blanks! Finally, when you are satisfied that it is all correct and satisfactory then locate a good flat surface.

Once you have repaired the wing it is placed on this flat surface,- once there you can then weigh it all down by placing heavy piles of magazines or buckets of water evenly spread out along the entire length of the foam blanks to act as a wing press. By placing all of this weight right along the whole length of the wing it will hold and press it all down tight and ensure that your wing repair sets straight and true whilst curing.

Leave it all to cure for at least 48:Hrs, when its eventually removed from the foam blanks and you start to peel off the plastic sheet you will be amazed at just how stiff the repaired wing has turned out. You may need to fill any low spots in the repair with a mix of 24Hr Epoxy and white Micro Balloons. Once again leave this to cure off. When it’s all set just sand it off smooth by starting with some 600 W/D paper, then move on to something finer. But do remember to vacuum the whole wing off well before finally covering it in your favourite film finish.