The sky is a volatile and capricious temptress … Sometimes, usually in a pre-PMT frenzy, she’s a thousand variations of grey with water vapour condensing to an extent that causes misery to all but the common duck. Then again she beguiles, with cerulean blue interspersed with an infinite variation of white and it seems that all Nature smiles. On such a day as this, if one adds to the recipe the long cleaving wings of a glider, or better still, a model glider of the scale persuasion, stir in the thrilling windsong of rudely interrupted and season with the powdered satisfaction of a long project finally brought to fruition, and you will find, as near as dammit, Heaven-on- Earth. I know this to be true, because I have just set the scene for the first flight of the fully completed and mission-ready Schweizer 2-32 over which much slaving has been lavished over so many months. 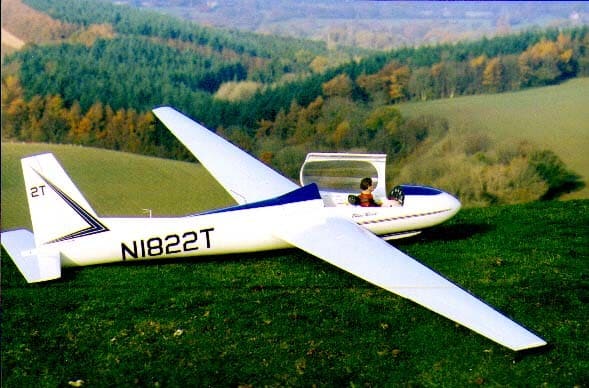 This has been an interesting project for many reasons, not the least being the fact that the full-size happens to be made of aluminium, which poses a few challenging problems in replicating the surface texture, surely one of the most satisfying aspects of scale modelling. The structure is of course composed of spruce and ply with a spot of balsa here and there to add lightness. The wings are fully sheeted with balsa and the entire model covered with Solartex and painted with two-pack acrylic.

Two problems had to be solved in the process of making this structure look like it was composed of aluminium; firstly the panel join lines had to be created, and secondly the flush riveting too had to be created. I have to say that the panel lines were less than perfect, but I’ll explain their creation none the less.

Martin Simons’ nicely drawn three- view in the book on Schweizer sailplanes came in very useful here, as both the panel lines and the major rivet lines are drawn in. Using this info, the lines were drawn lightly in pencil, then a long steel rule was taped in place. A variety of different instruments were tried in order to scribe the lines in place, a simple small Phillips screwdriver eventually giving the most consistent result. The problem is that you can’t cut through the ‘Tex, you can only score into the balsa beneath, so you have to be robust in your approach without being in any way destructive. Once the panel lines are scored, a fine felt pen was run along them, with a wet cloth to follow to remove most of the ink, but leaving the lines slightly enhanced. As I say, the results were not perfect, but the right general impression was certainly created. 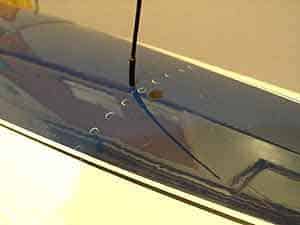 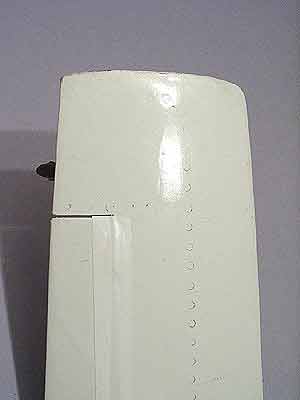 The rivets were fairly simple, there are just an awful lot of them! The best approach seems to be to use a sharpened piece of brass tube in a slow battery powered drill to cut into the paint, but preferably not the ‘Tex. To prevent the tube from cutting too deep you can wrap masking tape around the end, with enough tube protruding to the do the job. It’s no good just plonking the drill on the surface though, you need some sort of template to stop the cutting tube from wandering all over the place and giving you a series of figure-eight’s.
This was made up from a strip of 1/32″ ply, cut with the grain crosswise. This makes it flexible enough to bend round the curves of the fuselage, where it also makes a good guide for mating the vertical fuselage lines. A series of regularly placed marks on this piece of ply serve to show where the holes (Corresponding in diameter to the brass tube cutter) can be drilled. If you make the strip about 1/2″ wide, with the holes to one side, then you have plenty of area on the other side to allow you to tape the template in place when the drilling commences.
When you do start the drill, you Will probably find that you need to roll it around in a circle to make sure that the rivet has been replicated all round, otherwise you will end up with a series of half rivets. The tube can be sharpened by putting it in the drill and rotating it against a block with 120 grit paper attached to it. You will need to sharpen it a few times during the entire process, and remember to lighten the pressure to start with each time. Generally, I thought the results, if not perfect, were well worthwhile and as I know of at least another two varieties of Schweizer being built from Martin’s book, I hope this will be of some help.