Simulated Stitching
Without Too Many Tears (of boredom)

Having tried various methods of applying simulated rib stitching I rapidly came to the conclusion that it was not the most exciting part of building a scale model. It did, however, give the finished models that authentic look which made the effort worthwhile, if still a bit of a bore. I can’t say that this system is my idea. It’s something I picked up along the way some time ago, and have been using it ever since. It has certainly made that particular part of detailing, which is rather repetitive, a good bit easier. So what is it?

Quite simple, really. All you need are the following: – One piece of approximately 1/2″ thick timber – Some sheets of lightweight paper. – A good number of small nails – Sewing cotton – One Brush – A quantity of watered down PVA glue – A sharp bladed scalpel – A Steel Rule – Sounds a bit like a cooking recipe. You will also need a small hammer and a pencil. Nothing that is beyond the average model maker.

Method: – The piece of timber only needs to be anything from a 1/4″ upwards in thickness to give it some rigidity. You will be knocking little nails into the edge, so a piece of ply is fine. The length to be an inch or so greater than the maximum cord of the model’s wing to receive treatment, 10″ cord would mean around 11″ of timber. The width is totally uncritical. The wider it is, the more rib stitching you will produce. Ideally the width would match the width of the sheet of paper you are using. 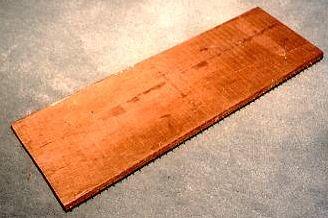 With the timber cut to size it’s time to decide on the distance between ‘stitches’. For instance, if the full size has the stitches at something like 2″ intervals, or there abouts (it’s never that consistent) and your model is a quarter scale replica of it, it would mean the model’s stitches would be at 1/2″ intervals. Now draw parallel lines across the width of the of timber at half-inch intervals (assuming that that is the spacing you are requiring) right down it’s length.

Grab a handful of the little nails, half-inch long are just right, and knock them partially in, leaving something like half their length exposed, all along each side of the timber, in line with your pencil lines. You will now have a lethal looking piece of timber with little metal studs sticking out of each side.

Now for the paper: – The continuous computer paper is handy, as you are not governed by length, provided you don’t tear the perforations that separate the sheets. Trim the paper to fit the width of timber. Then stretch the paper along the timber (not too tight to tear those perfs.), by wrapping it over the ends and taping it to the back with sticky tape. Once this is done it is time for…

The sewing cotton: – Start by tying the end of the cotton to the top left nail, run it across the paper face to the opposite, top right nail, hook under then down to the next nail (second right), hook under and run across to nail two on the left, hook under and down to nail three and then back across to nail three on the right, and so on till you get to the end of the board … reads like a knitting pattern! Once you get to the last nail, tie the cotton off and you should have what looks like some sort of odd musical instrument. Believe me, this is a lot easier to do that to try and describe in writing. 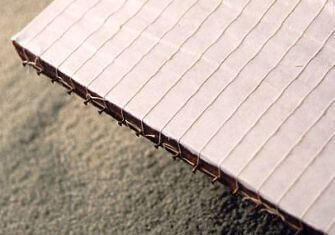 PVA Glue and Brush: – Watered down PVA (50/50) is fine. So is Balsa Loc, which can also be watered down. Both take well to being heat-sealed. Apply the watered down PVA over the cotton thread and paper. The idea is for the thread to soak up the adhesive and adhere to the paper. It’s OK to use a fairly well loaded brush to make sure everything gets covered. If necessary use two coats, just make sure that the cotton sits proud on the paper surface and is not ‘buried’ by the glue. Once everything has dried, the cotton thread should be well stuck to the paper. Occasionally the paper will wrinkle causing the cotton to lift off as things dry. That usually means the cotton was too tight, but unless the gaps are huge, there should be nothing to worry about. It is best to use real cotton; this absorbs the PVA somewhat more than the synthetic variety and will adhere better to the paper. Sharp Blade and Steel Rule: – Measure the thickness of the ribs used on the wings of the model. Usually something like 1/8″ or 3/32″ thick. Once all is well and truly dry, using your steel rule, proceed to cut strips the same width as the ribs along the length, across the cotton, and ‘Hey, Presto’ a length of rib stitching ready to be cyano’d on top of the wing covering over the designated ribs. Strips of ‘Stitches’ super glued in place on the covering over the ribs.It is only necessary to use three drops of cyno per strip. One at each end, and one in the middle. Just make sure it’s good and straight and that they look parallel to each other. Once again easier to do than say! 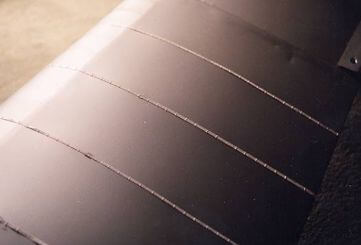 If you have used one of the ‘Tex coverings the final bit could not be easier. Slice the rib stitch tape from the same ‘Tex used to cover the wings, again using a sharp blade. Cut the strips approximately double the width of the stitching (if the ribs are 1/8th thick, strip them a ¼” wide). With a little care, iron the tapes over the stitches, keeping things straight and making sure to iron down the ‘Tex material firmly between, and right up to the base of the stitches, so that they really show. The wing tape will take well to the coat of PVA and become ‘part’ of the wing covering. Also, being wider than the strip of stitches, shrinkage will be taken care of and everything will be permanently stuck down. Some purists might say that the edges of the rib tape should be ‘pinked’ for the full effect. This can be achieved, with some perseverance, by tearing the fabric along the edge of a hacksaw blade. However, I think it’s true to say, that not all full-size rib taping is ‘pinked’. I once saw a beautifully finished, full-size, Pitts Special that needed very close inspection to actually see the rib tapes, they were almost feathered in! So that part is up to you. You will find that the finished result is very convincing with, for all intents and purposes, what really looks like genuine ‘rib stitching’… and very much easier to apply than the PVA blob system and others. Happy stitching.