A TWO-SEATER SAILPLANE FOR RESEARCH

(Translated from “Flugsport” by The Sailplane magazine (1933) )

The two-seater Obs Urubu of the Research Institute olf the Rhön-Rossitten Gesellshaft was designed by A. Lippisch. The aircraft was intended in the first place for the investigation of therrmal up-current regions. In the summer of 1932 the Research Institute decided, on account of the therrmal currents at the Griesheim aerodrome near Darmstadt, that temperature records should be made over larger areas and at different height levels, and that regions of upward and downward currents should be traced out from the distribution of regions of warm and cold air in the free atmosphere. These records have shown that, at aerodromes which are specially ” thermically ” suitable, frequent and almost stationary regions of rising currents develop, which even in the absence of any tell-tale clouds can be easily sought out by a sailplane. The charting of these stationary up-current regions will make it possible in the future to make more use than hitherto of auto-towing for advanced soaring flight..

These temperature observations for the charting of stationary upwind areas will be carried out over an extended range by be sailplane OBS in the coming spring. The observer’s cabin of the OBS has therefore been given such roomy proportions that, in addition to the meteorological observer, an extensive range of instruments can be included for carrying out the desired observatlons. Further, the OBS will be used in the further development of the aerological observation service, Now that aeroplane towed flight of gliders has been successfully developed, the entry of the sailplane into the field of aerological research is made possible over an extensive range.

It has been planned to have the sailplane OBS towed by an aeroplane of the meteorological service to a height of 5,000 to 6,000 m. (16,000 to 20,000 ft.). After having cast off at this height, it is possible for the sailplane, even without the help of up-currents, to remain in the air for about another three hours. By this means it will be possible for the OBS, undisturbed by engine vibrations or exhaust gases, to carry out aerological observations to a far more extended degree than has hitherto been possible with the meteorological service aeroplanes. 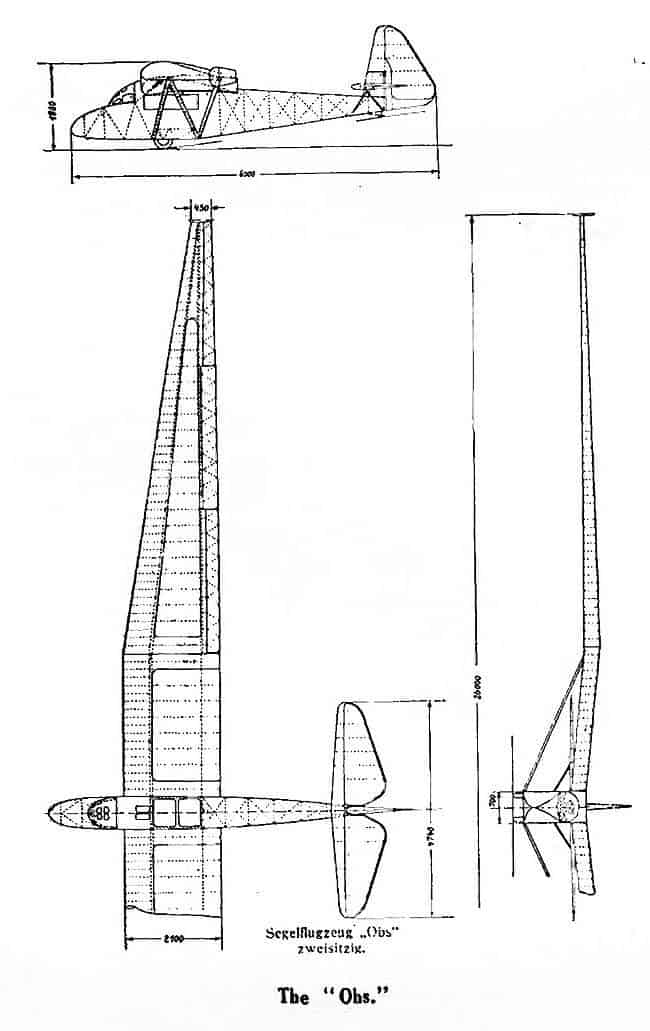 In order to obtain sufficient aileron efficiency wlfh such a large span, the wing has a slight twist. The aileron on either side is divided into three sections, eachl with differently formed slots. [ If our memory is correct, the outer aileron slots would only let the air through from below to above, i.e., with aileron raised, while the action of the inner ones was the exact contrary. It was also stated that the outer ailerons worked dlifferentially, and that the middle and inner ones could be used to Increase the camber, presumably by pulling all four down together. ~Ed.]. The trial flights so far undertaken have shown that the desired aileron efficiencv has been attained.

The fuselage is built up of welded steel tubing with wire cross-bracing in the rear part. The enclosed pllot’s cockpit is entered through the detachable hood and the observer’s door. The central section of the wing is covered with Cellon where it adjoins the fuselage in order to provide an upward view for radiation observations. The observer’s cabin is of such Iarge dimensions that a table can be fitted for writing down notes and observations during flight.