Modellers are sometimes perplexed about the Type abbreviation for this glider of Mü13. You may have come across the same type number before, used by the Munich Akafliege for the principal prewar German high performance single seater Mü 13, Atalante, mentioned elsewhere in the documentation on this website.
The history behind this is that Egon Scheibe, the designer of the Bergfalke previously worked for the Akaflieg 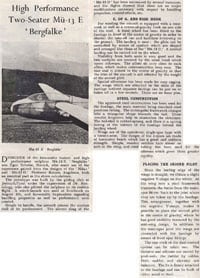 Munchen developing that glider, but the war intervened and afterwards Germany was not allowed for some time to get involved with aviation production, so Egon Scheibe moved to Austria where he was free to continue development and later set up his own factory. The Bergfalke was built with the knowledge he had previously gained and was to be a continuation of the development of the Mü13 line, but in truth became a totally new glider in its own rights and being a two seat glider was to become a serious competitor to the Schleicher two seaters.

All the Bergfalke series used common building techniques of mixed construction, using steel and chrome-molybdenum-tin alloy as well as wood. The single-spar wooden cantilever wing had steel tube flaps and fabric-covered steel-framed ailerons while the fuselage was a fabric-covered steel framework of basically square cross-section. The tail unit was of conventional wooden construction. Particular attention was paid to good visibility, there being large window panels inset into the sides of the cockpit while a clear panel inset into the wing centre section leading edge gave the pilot a better view above and behind him; the cockpit canopy was detachable, and several different shapes were used. A monowheel landing gear and tailskid were the landing aids.

After the re-introduction of gliding in Germany, a meeting was held on the Wasserkuppe on August 11th 1950 where the two seater Mü 13 of Egon Scheibe caused a great sensation amongst the 50,000 visitors . This prototype had been built in Innsbruck and flew with Austrian registration OE-0138 and is now on display at the Wasserkuppe Museum. At the end of that year the Scheibe Flugzeugbau GmbH was founded and the Bergfalke (or Mountain Falcon) was the first type to go into production at the new company’s works at Munich Riem airport. This new two seater was to spell the end for Primary Glider training.

The Bergfalke I with its 17.20 meter wingspan (also see note at the bottom of the page) is easily distinguished by its straight leading edge wing set at right angles to the fuselage which allowed the glider to be flown solo from the rear seat without serious trim changes.Flat canopy perspex panels were used for the canopyand had a distibtive rounded rudder. 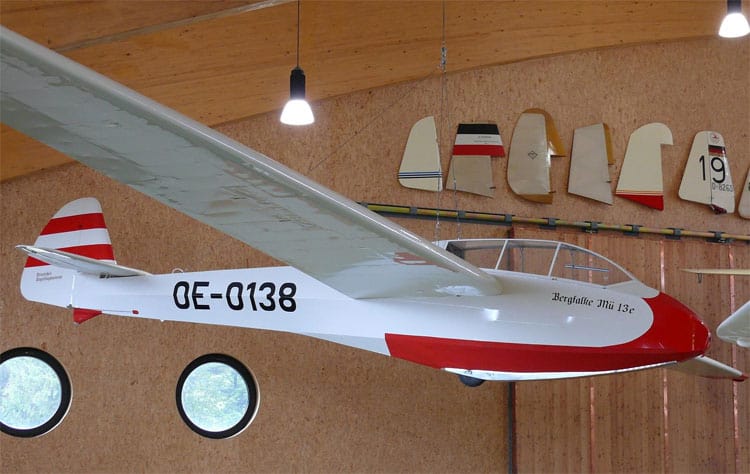 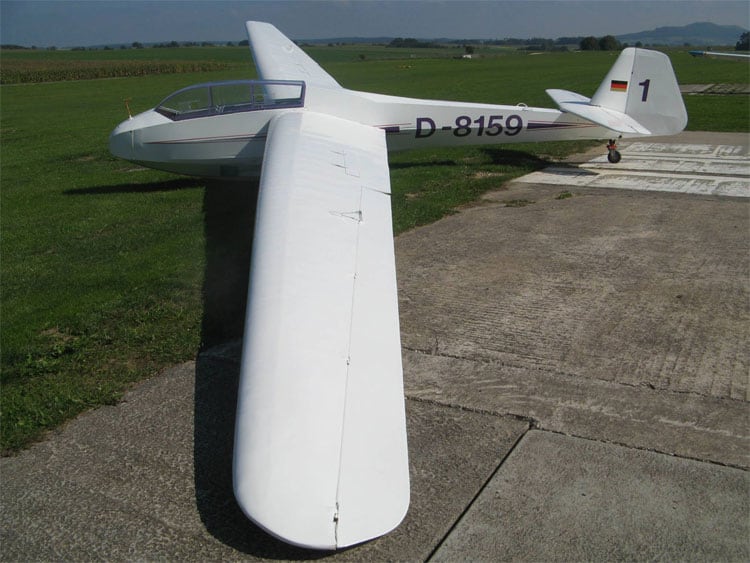 The Bergfalke II from 1951 was developed with 4 degrees forward sweep on the 16.6 meter wings. The rudder was also squared off 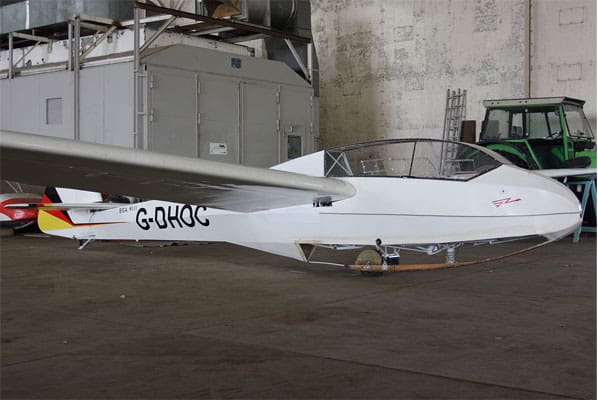 The Bergfalke II/55, again with the 16.6 metger wing and a revised canopy with one less frame. A selection of internal fuselage construction photos can be found here:

A total of 225 of both of the II series were built. Many examples can be found via this link 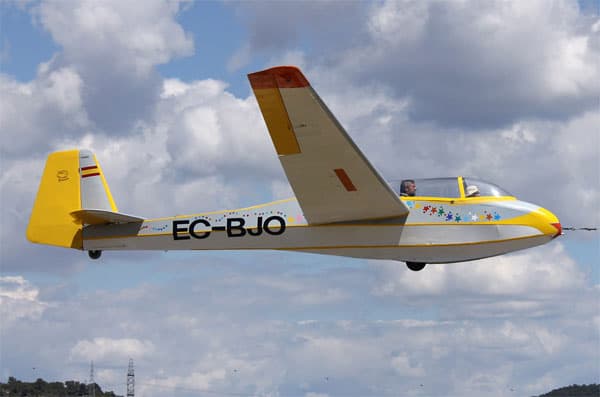 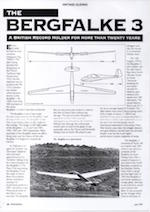 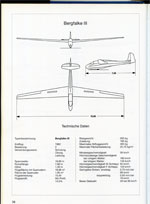 In 1962 the Bergfalke III was produced. It had a with a more streamlined cockpit canopy formed from a blown forward canopy from a Scheibe Spatz L 55, a redesigned and taller fin and rudder and 2 degrees forward sweep on the wings of the same section, which have Schempp-Hirth air brakes; but a tailwheel replaces the II/55’s tailskid. A few Bergfalke IIIs were built under licence by the Spanish firm Stark Iberica SA.

A total of 160 of this type were built. Many examples can be found via this link: 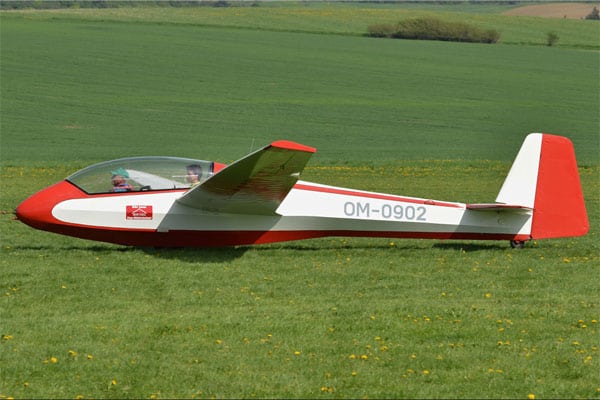 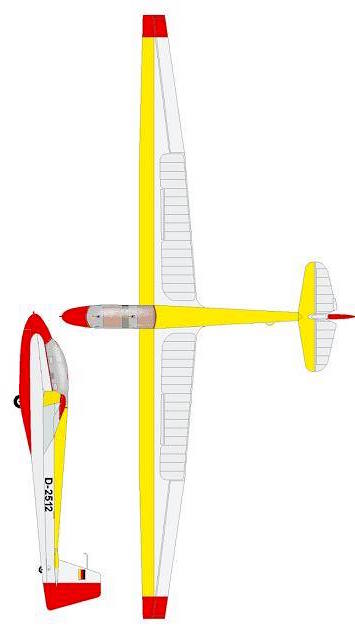 he Bergfalke IV with a blown Plexiglas canopy. and a new wing of Wortmann section giving improved performance. The nose section on the Mk IV is a moulded glassfibre shell.Construction of the prototype Bergfalke IV began early in 1969 and the first flight was made a few months later. The cantilever mid-wings are of all-wood construction with a fabric-covered plywood skin; the single laminated beechwood box spars are joined at the fuselage centreline with a single vertical pin. The ailerons and Schempp-Hirth air brakes are also of wood. Like previous versions, the welded steel tube fuselage is fabric-covered, the nose section on the Mk IV being a moulded glassfibre shell. The tail unit is of wooden construction, the tailplane being mounted on the fuselage forward of the fin; there is a Flettner trim tab in the starboard elevator.

A total of 70 of this version had been built by the beginning of 1978. Many examples can be found via this link

Scheibe themselves were test flying another powered version of the Bergfalke IV early in 1976 with a 52hp Hirth 0-28 ‘flat twin’ engine mounted on a retractable pylon aft of the cockpit and driving a two-bladed fixed-pitch tractor airscrew; the engine can be raised and lowered into the fuselage electrically in less than 20 seconds, retracting behind closed doors.

* Note:The original wing of the Series I was 17.20 meter span, but following an accident, permissiion to fly was only granted if the span was reduced to 15.76 m.