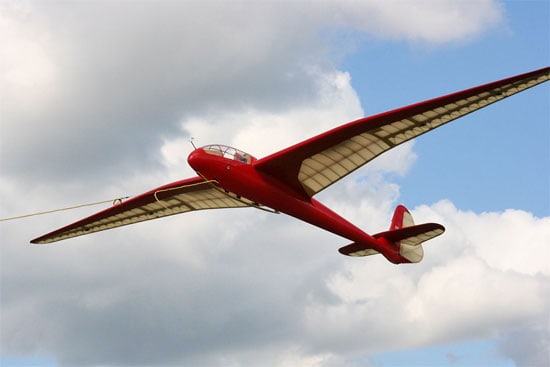 Slingsby was founded in Scarborough by Frederick Nicholas Slingsby, an RAF pilot in World War I. In 1920 he bought a partnership in a woodworking and furniture factory in Queen Street, Scarborough. In 1930 Slingsby was one of the founders of the Scarborough Gliding Club. After repairing some of the club’s gliders, Slingsby’s business built its first aircraft, a German designed RRG Falke which flew in 1931. In 1934 the business moved to Kirkbymoorside, 30 miles from Scarborough, operating as Slingsby, Russell & Brown Ltd. As demand for gliders built up, a new factory was needed and built in Welburn, just outside Kirkbymoorside. This opened in July 1939, when Slingsby Sailplanes Ltd was founded. (Wikipedia)

The Slingsby Type 13 was brought about by a request from a glider pilot, Frank Charles of the Furness Gliding Club, for a British built equivalent to the Rhönadler, but with a gull wing. Peter Riedel wrote in the Aerokurier magazine that the true children of the Fafnir were the Rönadler and Condor. These two machines were produced in quantity whereas the Fafnir was not. As the Petrel was a development of the Rönadler (in fact with its gull wings one could almost say that it was more similar to the Fafnir than the Rönadler), one can truly state that the spirit of the Fafnir lives on in the Petrel. The wing mounting differs from the Rhönadler,
which are bolted together ‘before lowering onto the fuselage,whereas the Petrel wings are mounted onto the fuselage separately.

Frank Charles gave the name Petrel to the new Type 13 and also specified for his version a different canopy of wood construction with a port-hole to the sides, similar, but larger than that used on the German Fafnir. The standard design was to use a cockpit cover similar to the one used by the Gull. Fred Slingsby intended the glider to have a pendulum tailplane, but then decided the pendulum elevator was not desirable and the standard tailplane was made for the third example which went to Ireland. 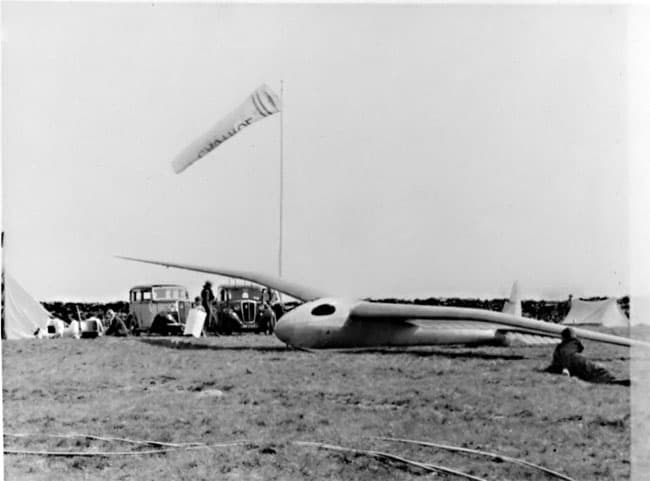 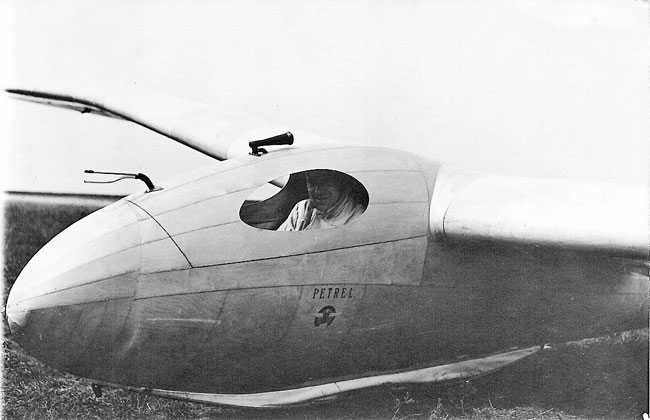 had an all flying tailplane and first flew in December 1938, although Frank Charles would not make his first flight until a month later. Flight tests showed that the glider had a remarkably low sinking speed throughout its speed range. Charles reported that “the Petrel stalls at 29 m.p.h. on his A.S.l. and just falls back into a glide like a FALCON does, there being no tendency to drop a wing-tip, hence no tendency to spin He has not, of course, deliberately crossed the controls to make her spin, but has dived her until the needle passed beyond the 80 m.p.h. mark, which is the limit of graduations on the dial.” (The Sailplane, March 1939) On one flight Frank Charles reported as having lost only 500 feet on a 7 mile glide from 2,800ft on a straight track.

Read the ‘Sailplane’ test report from 1939 above

P.M.Watts 1939 report of one of his trickiest flights

no one has ever been able to say to this day what actually caused it. The Petrel was launched by winch in a heavy shower of rain making the winch cable impossible to see. The glider ascended into a low cloud base and disappeared from view, but unaware that the glider had not released, the winch crew cut the power to the cable. The Petrel came into view downwind, still with the cable attached dangling below the glider, but when the glider reached the limit of the cable length it was brought abruptly to a halt and dived into the ground ground from 200 feet killing Frank Charles. The tow release was subsequently found to be serviceable. You can read Martin Simons detailed eyewitness report on his website 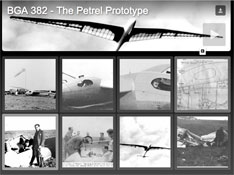 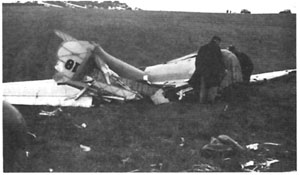 This early original factory 3-view was without spoilers, but a note said that “Lift spoilers” would be fitted to the production types”. 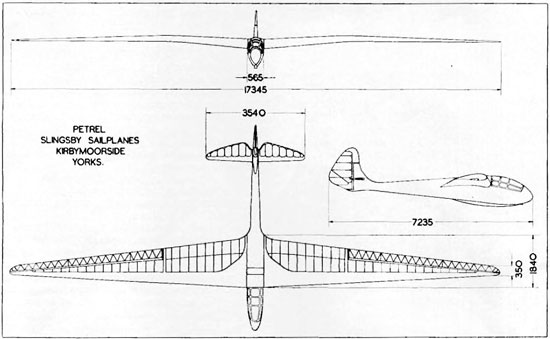 From the Sailplane magazine, August 1939

Frank Charles was a skilled sailplane pilot, and had taught himself to fly in a KIRBY KITE which he previously owned. He was circling this machine in thermal currents on only the seventh time of his leaving the ground, in January, 1936. Since then he has done a tremendous amount of work for the Furness Gliding Club near which he lived, and the club will feel their loss severely. In order get more time for gliding he gave up his profession, speedway racing, after the 1938 season, though he signed on again in June with his old team at Wembley, and had to leave the Contest (British National Championships) for a day to fulfil an engagement there. Charles’s flying was a delight to watch, for he had a genius for handling anything in motion-in fact, we learn that in his his schooldays he shocked the staff by riding a bicycle along the school yard wall. Before achieving fame as a speedway rider he had toured music halls with an accordion, and those present at these Contests remember how well he played the Instrument. 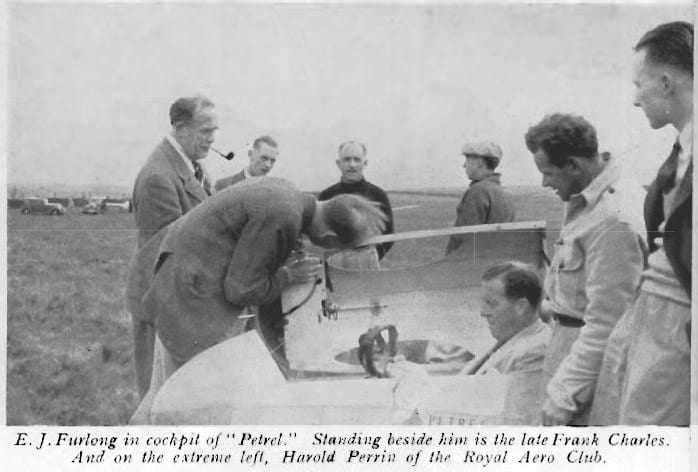 This picture shows the interior of the wooden cockpit.

Originally eight Petrels were on order from Slingsby to be used throughout the old British Empire, but this was not to be, due to advent of WWII and only two more were finally built. 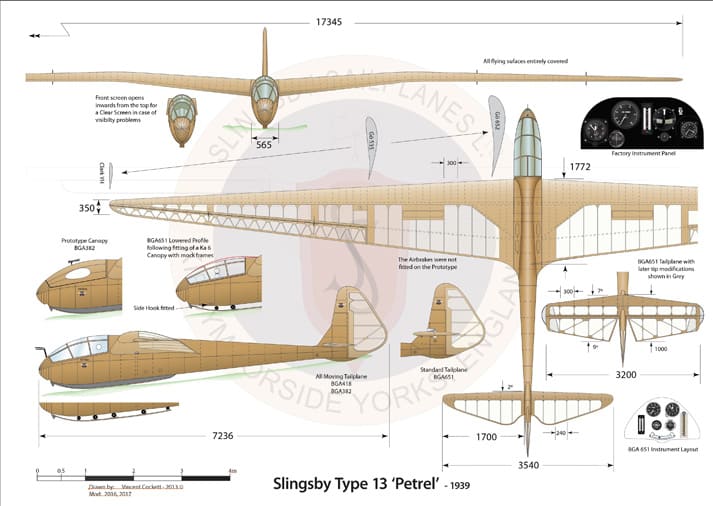 You can download a large format PDF of this 3 view by clicking on the picture. 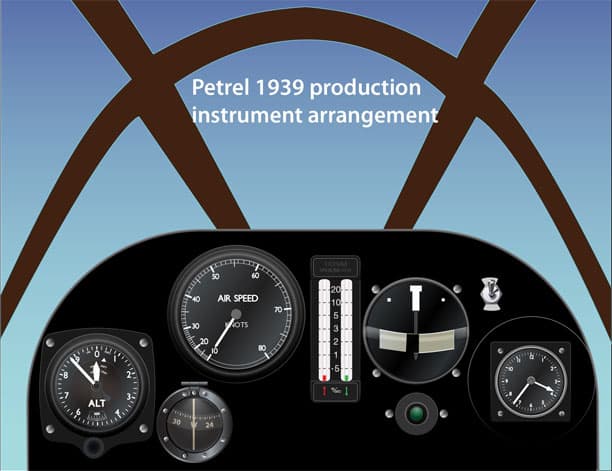 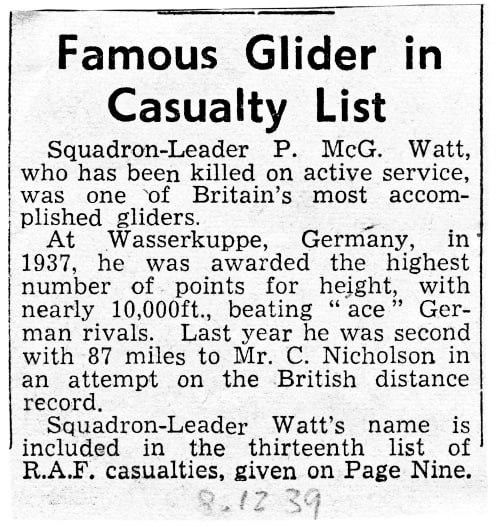 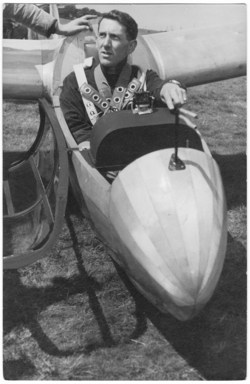 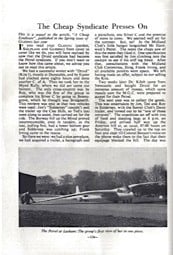 Soaring Contest by Slingsby Sailplanes and was flown by Squadron Leader P.M. Watts, the event at which Frank Charles was killed. The Petrel was to place 4th overall, the event being won by a Rhonesperber. As with all other aircraft during WWII, the Petrel was impressed into service for military use and was to be found quietly flying over the North East of England as a practice aerial target for the Royal Observer Corp. It was delivered to its first civil owner, John E. Simpson, in July 1941 who was a teacher at Clayesmore School, Iwerne Minster, Dorset, England for which he paid Slingsby £300 plus £8 1s 5d delivery. It has a tailplane almost identical to that of a Rhönadler.

The glider was originally finished with a high gloss varnished wood., but in 1955 it was painted all over white and would go through several transformations of the cockpit canopy during its life. In the 1980’s it was recovered in Ceconite and so it was possible to leave the flying surfaces partially transparent.

It was sold in 2002 to Bob Gaines in the United States where it is currently undergoing a long and detailed renovation after which it will once again have the original varnished wood finish under its new registration of N39UK. Unfortunately Bob Gaines died in 2011, but the project has been taken over by the Western Antique Aeroplane and Automobile Museum in Oregon. As of today (23rd May 2013) the Petrel is still in its trailer at the Museum who say that it will be moving to Wyoming for its restoration. I will update this page with its progress.

Pictures of this glider after the first civil delivery from Slingsby are shown below by kind permission of Colin Simpson. Colin has also provided the history of ownership of this glider, which can be viewed here 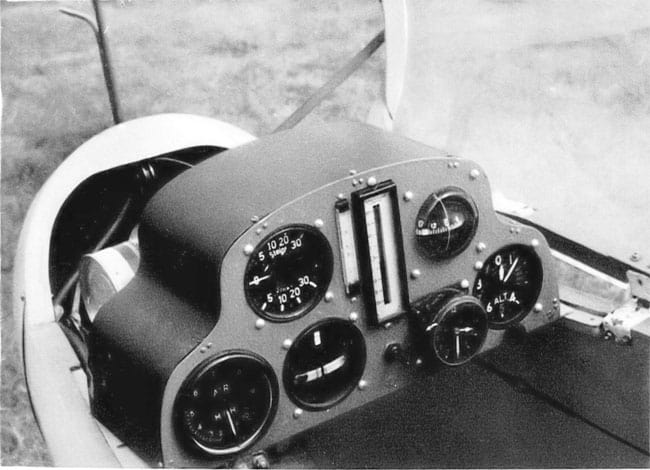 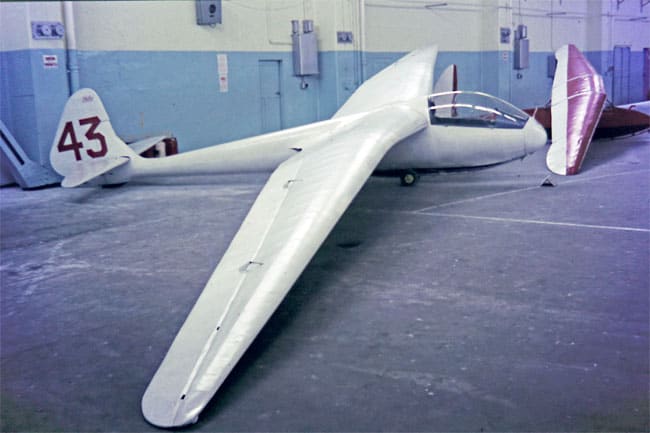 Above is the 1980’s white colour scheme with translucent areas and yet another canopy
The photo was taken in 1989 at the VGC Rally at Farkashegy airfield.

Above is the 1980’s white colour scheme with translucent areas and yet another canopy
The photo was taken in 1989 at the VGC Rally at Farkashegy airfield. 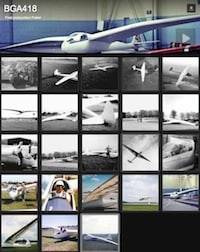 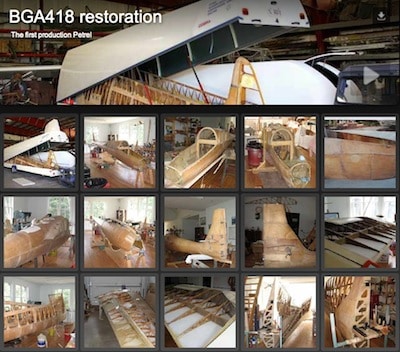 The American restoration by Bob Gaines 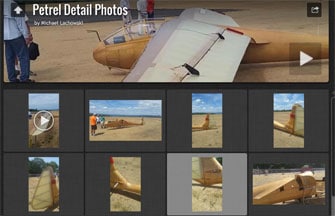 Detail photos of the finished Petrel refurbishment by Michael Lachowski 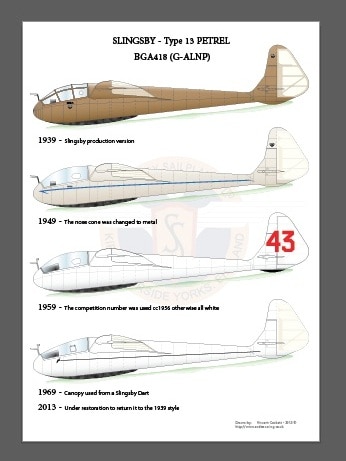 Changes to BGA 418 over time 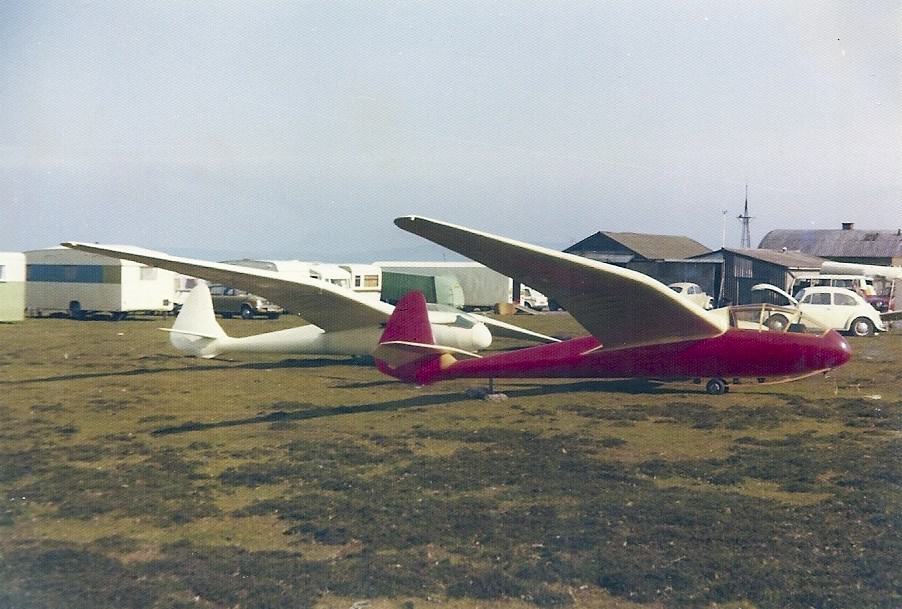 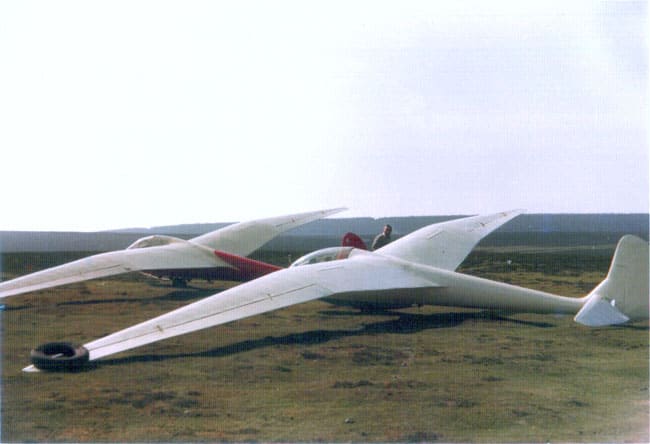 A listing of the history of BGA 651

(BGA651 c/n 363) was built in 1939 wich had a standard elevator type tailplane with square tips, a shape entirely different to the first pendulum style . It was finished overall in varnished wood.

In 1947 a small engine was fitted on top of this Petrel fuselage by Wing-Commander K. H. Wallis, later well known for his Wallis autogyros. The engine was a starter for a German Jumo 004 jet engine from WW2 and was a tiny 2 cylinder 270cc 2 stroke only 10” across the twin horizontally opposed cylinders. A wheel from the tailwheel of a Spitfire was added into the skid to aid the launch and was to remain in the glider until 1973.. One evening at Redhill this little engine powered Petrel made ten take-offs and proved itself. Unfortunately this act was scorned by the purist glider pilots at the time, including Ann Welch, although she later became convinced of such methods. The following unclear photos are all that is currently available on this remarkable event. Read more………..

The only poor quality photos of the self launching trial> 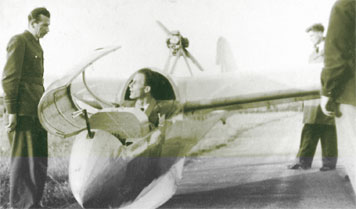 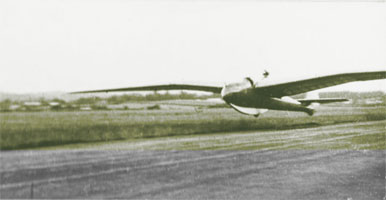 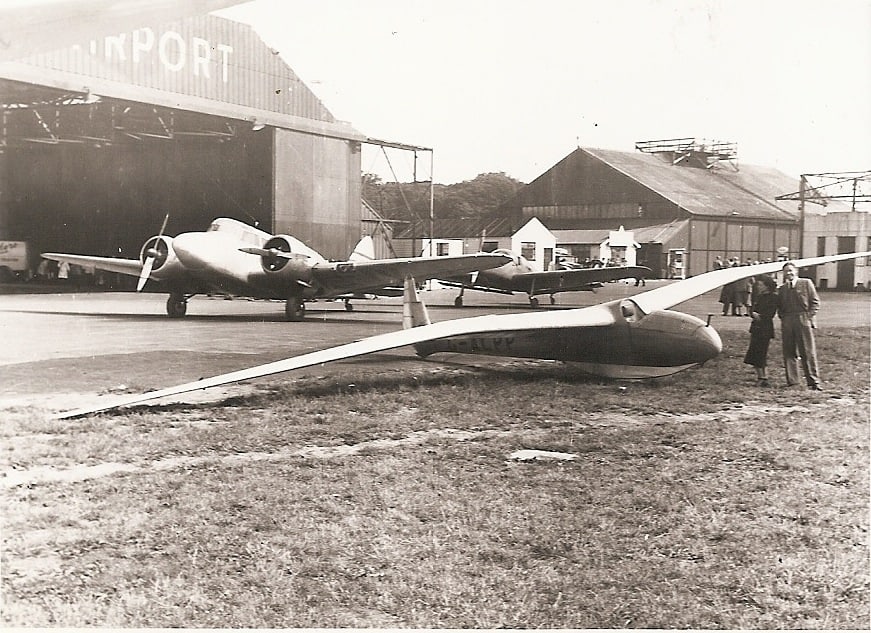 G-ALPP with its open cockpit canopy

It was based in England until 1954 when it was bought by an Irish syndicate in Dublin and given the registration of EI-101, later to become IGA-101 by the Irish Gliding and Soaring Association.

The ‘Irish Petrel’ syndicate operated at Baldonnel, an Air Corps field, where launches could be made to 1,500 feet, but following a new concrete runway installation the syndicate were forced to move to Curragh 30 miles away. Fortunately it was now possible to launch to 1,800 feet. The Petrel went on to make an Irish altitude record.

Mike Russell, who was an airline captain for Britannia Airways, had previously been a member of the British syndicate which previously owned the Petrel. In 1973 he noticed in a hanger in Dublin his dream machine, the Petrel, hanging in the rafters of what was the Aer Lingus Museum. Mike purchased the Petrel, borrowed the Petrel trailer from Ron Davidson (BGA418) and brought the Petrel back to the Long Mynd in England where it was again made airworthy. 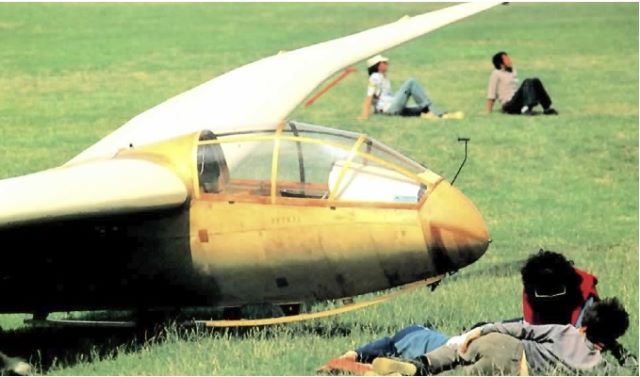 In 1980 a full restoration was started on the Petrel, but it had to be abandoned by Mike Russell due to other commitments and in 1993 it was bought by its current owner Graham Saw, who completed the restoration during which he converted the square tipped tailplane to a radius tip, the shape of which was influenced by the legendary German designer Hans Jacobs. He was interviewed for the VGC magazine in 2001 and this is what he said about the Petrel.

What is your favorite glider?

To me, a favourite glider cannot be defined by performance, rarity or handling. It is a combination of the feel of the glider sitting in lift, looking past struts, wires or gull wings at beautiful scenery, mountains, valleys, lakes. It can be the privilege of flying someone else’s treasured glider. I am biased towards slow, “floaty” gliders. My Petrel requires no physical or intellectual effort from the pilot. You sit in it, like an aerial carriage and watch the world go by, very slowly. It is the ultimate “grin” machine! 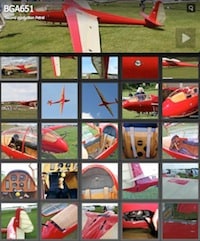 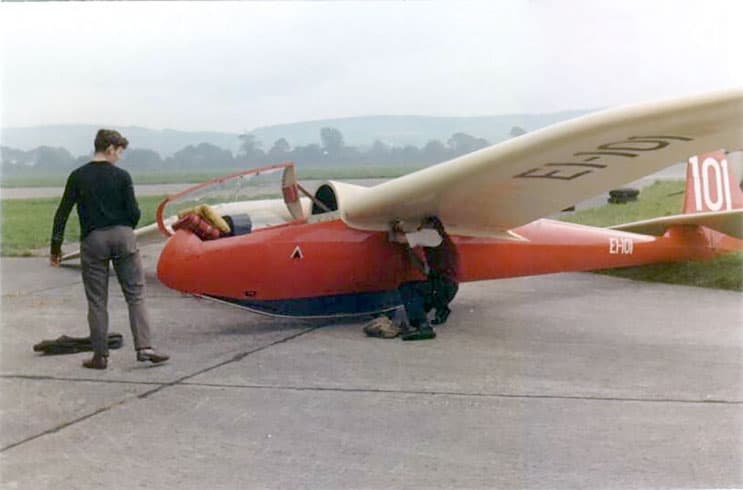 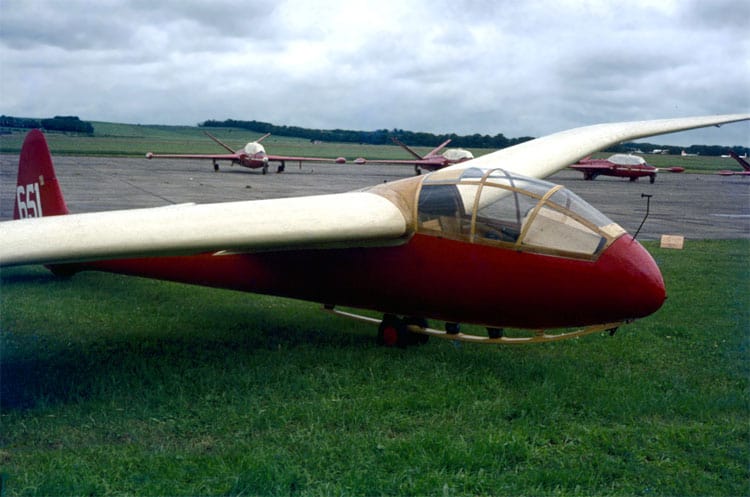 The Petrel when in Ireland was given a red fuselage and all over ivory wings. It retained the self launching wheel in the skid until it returned to England (above) when it was finally removed – photos: Dave Hooper, Alan Pratt.

Read these personal memories of flying the Petrel in Ireland, the first by Stan Dunne and the rest by Dave Hooper 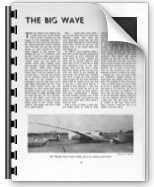 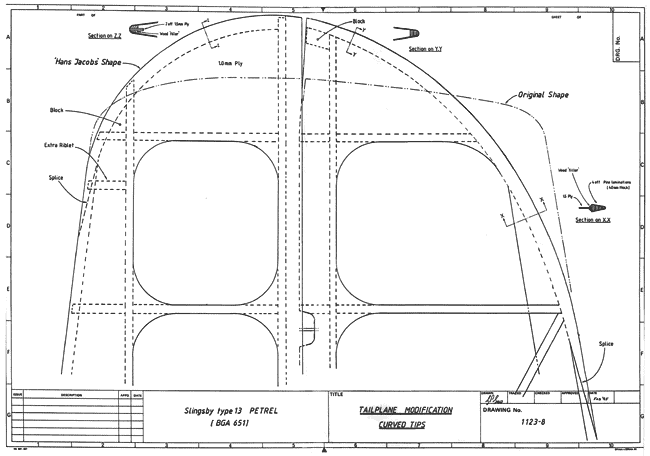 Tailplane modifications carried out in 1996 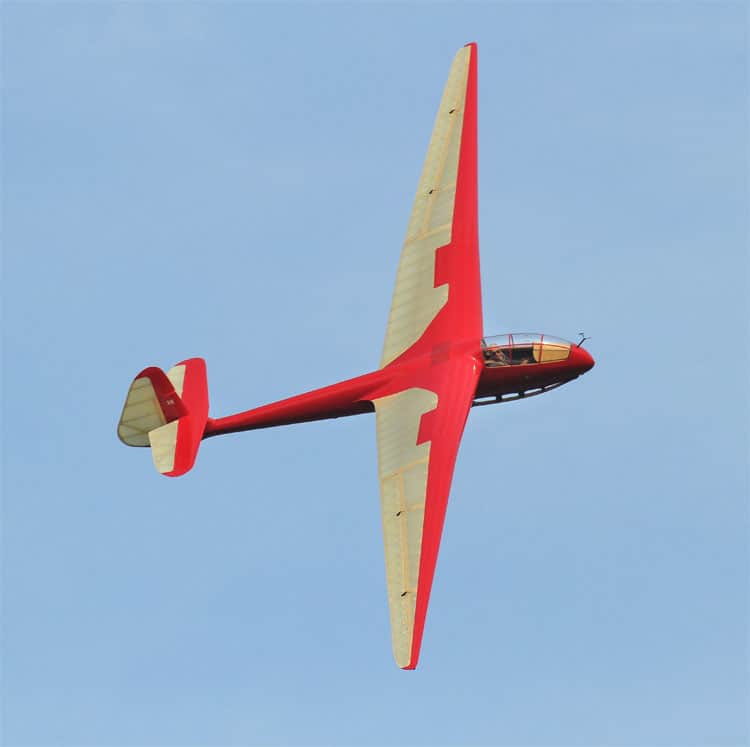