We have often heard the statement: – “What is the use of old gliders? You can’t go anywhere in them”. Then we have been asked by experienced glider pilots (who we think should know better) “How fast can you fly old gliders between thermals?”

The following article is an answer to some of these questions to give our members something with which to fight back.

Occasionally gliding records have been broken by such a huge margin as to create an international sensation. In this category were the records flown by Soviet Glider pilots in between 1937 and 1939. Their flights were such as to break existing records by as much as 30% and, in our opinion they were the most sensational records of all time. Although these records were recognised by the FAI, no details of the sailplanes, which flew them, have ever been released to the West until now.

It is our proud honour to be able, through VGC News, to reveal for the first time details of the GN-7 flown by Rastorguev on his staggering 652kms world distance record in 1937. The previous World Distance Record was 504 kms flown from the Wasserkuppe by four pilots during the 1935 Rhön Contest. Even more sensational was Olga Klepikova’s 1939 World Distance Record of 749kms in a Rot Front 7. Until now, the only information we had on the RF-7 was that it was similar to the 1948 A-9, which some of us have seen. Just how it was is now evident.

Details of great numbers (83) of Soviet pre-war sailplanes were publicised in Soviet books during the 1950’s but no information filtered through to the West. Details of the GN-7 and

Stakhanoviets were kindly given us by Martin Simons who had obtained some of these books with the assistance of the Adelaide South Australian State Library. Gabor Fececs of Budapest kindly sent us details of the Rot Front from an East German publication.

Some details of the Stakhanoviets have been previously released as one was seen at the 1936 Paris Air Show, although our information says that it was not finished until 1937. 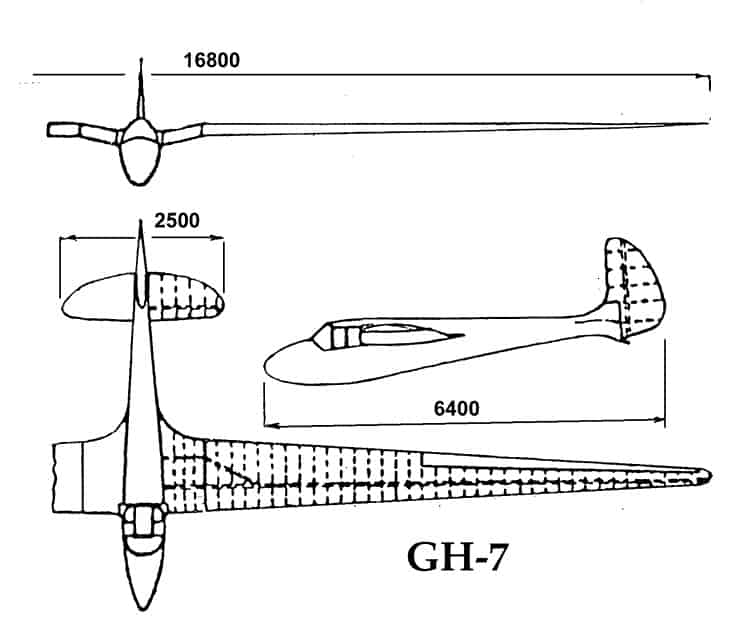 We think that the above reveals that it was no “Lead sled”.

Already the first of these flights had broken the existing world record of 504kms. On his last flight, Restorguev flew from Moscow Tushino, took course at 6,000 ft. and landed late in the evening at Saratov in the Volgograd (Stalingrad) region. Collective farm workers with showers of rose petals greeted him as a hero.

During the 12th Soviet National Contest of 1937, the GN-7 was judged as the best single-seat sailplane. However, it was outclassed by Korotov who flew a KAI (Kazan Aviation Institute) 3 flying boat glider 385kms, and by the AG (Antonov Groschev) 1 (an improved GN-7 which Groshev had designed in collaboration with O.K. Antonov) which flew 326.5kms on 21st June. The VGC has three view drawings of the latter two sailplanes.

This two-seater had been designed by Emelyanov who had developed it from his 1935 KIM 2. The Stakhanoviets was the KIM 3.

It can be seen again form the data below that this was no “lead sled”. The swept-forward wings foreshadow those of some modern two-seaters, especially the Bocian. In spite of its over 20m wing span, its weight was comparable with that of some Kranich 2’s which have 18m spans. 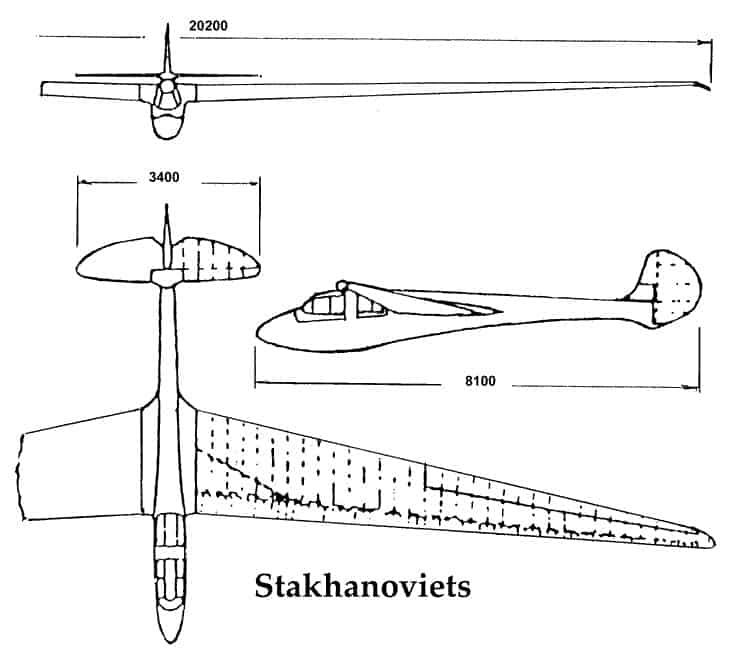 ·       Jul 1938    I. Kartashev and passenger flew a Stekhanoviets 619kms from an airfield near Moscow to the region of Chernigov. The flight lasted 7 hours 30mins.

·       Kartashev and Gorokhova flew a Stenkanoviets 395.7kms from Moscow to Gorki, a World Two-seater Flight record.

·       Kartashev and Petrochenkova flew a Stekhanoviets 495kms from Tulo to Karkov, a World Goal Flight record.

Until recently, we had heard only that this sailplane in which Olga Klepikova had flown over 749kms in 1939, was similar to the post war built A-9, but did not have the latter’s turned down wing tips. Just how similar it was, can now be seen.

The East German publication, from which the information comes, states: “The 1938 Oleg Antonov designed high performance sailplane ‘Rot Front 7’ can be included among the best sailplanes of that time. Beyond having flown several Soviet best performances, this cantilever shoulder-wing sailplane flew two world records, one of which was the sensational distance flight by Olga Klepikova of over 749 kms in 1939.

“The wings of the RF-7 were in three parts. The tips were fitted on to the two-spar, permanently installed, centre section. The fuselage was of aerodynamic form with the canopy blending into its line. The single wheel undercarriage could be retracted and the undercarriage compartment’s doors shut. Behind the pilot’s seat was a tank for 120 litres of water ballast. In spite of minimum empty weight, it was so strong that it was cleared for full acrobatics.

“The ‘Rot Front 7’ design served as a basis for the 1948 designed record breaking A-9 sailplane.” The RF-7 was of stressed skin, semi-monocoque, and wooden construction.

It would seem that the RF-7 was one of the most highly wing-loaded sailplanes of its time and was designed specially for distance flying at great speed.

Also refer to separate VGC document on the A-9 here 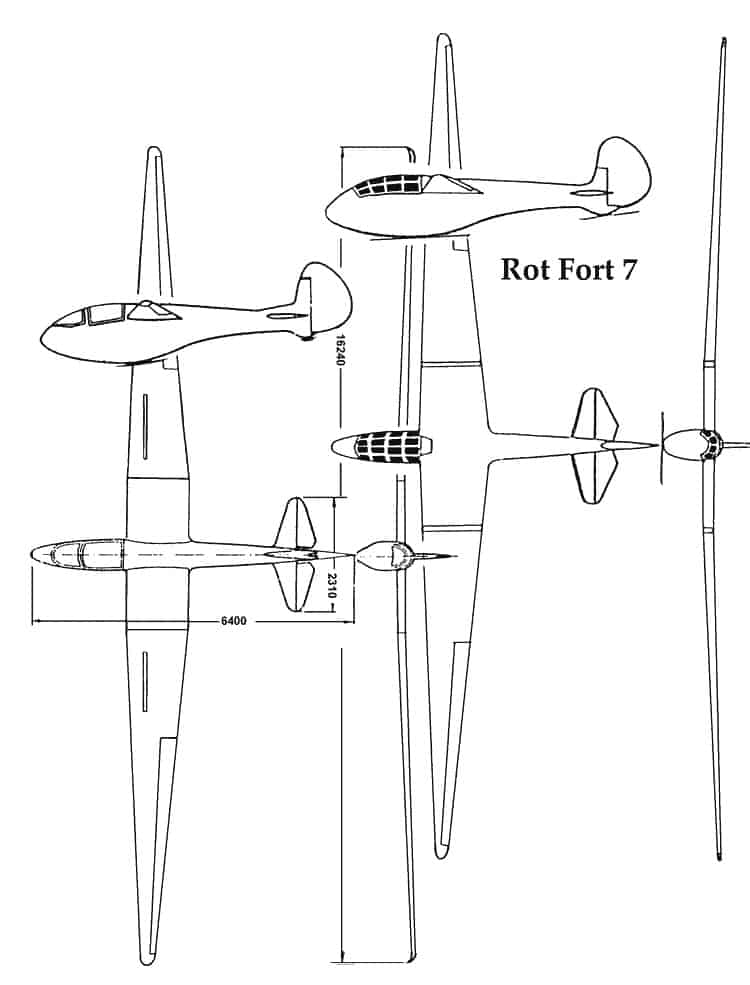 She started from Tushino airfield near Moscow, and landed after flying for 8 hours 25mins, near the station of Kikhailovka in the Volgagrad (Stalingrad) region. This was the world distance record for both men and women and was broken by Dick Johnson in 1951 flying the RJ-5 in the USA. As a woman’s record, it was not broken until recently by a fibreglass glider in Poland.

The previous World distance record had been 504kms set up by four pilots during the 1935 Rhön Contest, but the German record was increased to 523kms by a Minimoa in 1939. During 1938/9, German pilots were severely restricted for distance flying by their not being allowed to cross their frontiers because of the political situation.

31.7.39. P. Savtsov flew an RF-7 602kms on a World’s Goal Flight Record starting from Tula and finishing in exactly the same place where Olga Klepikova had landed.

It would seem that de-rigging the RF-7 and A-9 only consisted of removing the outer wing panels. The big effort was needed to lift the sailplane without wing tips onto a lorry for its retrieve. Their centre sections were not so wide as to overhang the lorry’s sides by very much.

The pre-war Soviet sailplanes were not fitted with wing lift spoilers or air brakes and so one assumes that good landing areas were available.

Rastorguev was killed as a test pilot during the war but Olga Klepikova lived on as a schoolmistress.

During the war, almost everything to do with pre-war Soviet Gliding was destroyed in the great battles West and South of Moscow. After the war, Soviet gliding had to be recreated and it was lucky that information on the RF-7 existed to be used for the basis of the A-9 design.

Source for the RF-7 information was:    Hartmut BuchLSegelfliegen).

Return to Point of Departure

(Other records are mentioned in Rot Fort 7s and Stakhanoviets but have not been thought worthy of recording owing to their being less than 300 km or 6280 ft. height.)