Model documentation PZL-104 Wilga
This file is from Model Fleger magazine and is roughly translated by Google, so appologies for the grammar.
With thanks to Hans-Jürgen Fischer for the notification. 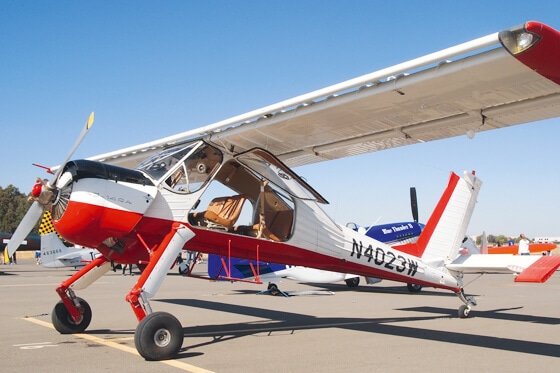 About a successful, attractive design you could certainly argue for hours and talk shop, you would not agree so quickly. Too different tastes. Typically already give the laws of aerodynamics before a pleasing and stylish airframe. Thus developed from the documented here PZL-104 Wilga which initially did not seemed so discordant, after several modifications, the striking lines. 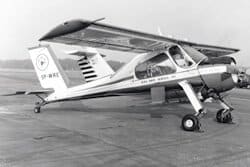 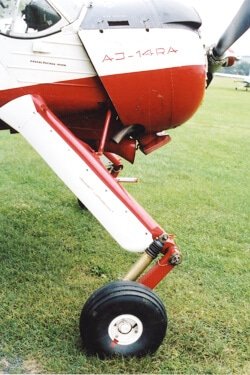 Cowling and undercarriage of the Wilga 35th For maintenance on the engine cowling can be removed with a few quick releases. Photo: Gary Gray. 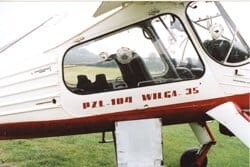 In almost all of the right Wilgas appearance before the entry and exit is designed specifically for skydivers. And surprisingly, the photos of the D-ECEN no exhaust system is visible. Today all federal German Wilgas with the big muffler pipes are provided. Photo: Gary Gray 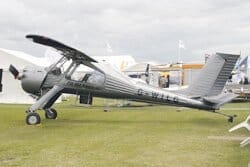 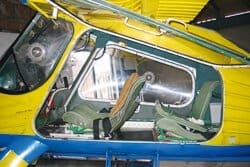 A view of the interior of the Wilga 35, D-EPBM. Photo: Sebastian Reason 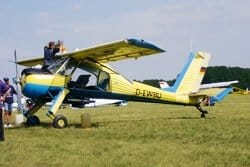 The D-EWBU a Wilga Version 35 is being refueled. The wing tanks have a total of 195 liters. Per flight hour approximately 60 liters of fuel are consumed. Photo: J. Ewald, archives, Hans-Jürgen Fischer 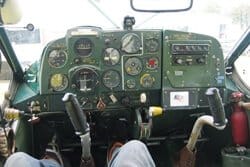 Look into the cockpit and on the instrument panel of the 35th Wilga The main flight instruments are arranged to the left. In the middle of the display for the engine control and on the right the radio. Also very good to recognize the stick for the pilot and copilot. Photo: Sebastian Grund 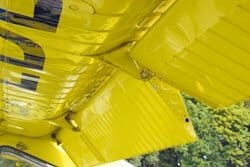 View of the wing underside with around 40 degrees flaps extended gap. The ailerons are mounted according to the system Frise, so the axis of rotation under the rudder and the rudder behind leading edge. Photo: Sebastian Grund 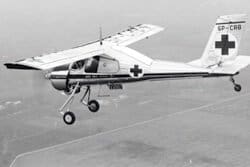 Beginning of the 1960s began in the then Polish State aviation company PZL (Polskie Zaklady Lotnicze) with the construction of a single-engine multi-purpose aircraft. The machine should be suitable for agricultural and forestry work, as travel and training aircraft machine for landing of paratroopers and glider towing. The new design should replace the already getting on in years types CSS-13 and PZL 101 “Gawron”.

Lifted from the baptism
Responsiblility for the PZL-104 Wilga-type 1 were the designers Richard Orlowski and later Andrzej Frydrychewiz. This was a single-engine, four-seat, high-wing cantilever with a fixed undercarriage. The rectangular floor plan designed wing was provided almost the entire span of a fixed leading edge slats. The surface structure was made of metal construction with some fabric covering. The fuselage with the conspicuously large glazing in the side areas was carried out in all-metal construction. The fuselage cross-sections were made slightly trapezoidal, in the area of the engine cowling, the sections were designed elliptical. The conventionally constructed normal tail also had a rectangular floor plan. The fins were planked metal, provided the rudder with fabric covering. The horizontal stabilizer was not braced against the fuselage. The bipod was not retractable landing gear, the undercarriage legs and wheels were made undisguised. When driving a six-cylinder boxer engine was with the type designation: Narkiewicz WN-6RB with an output of 195 hp.
The first flight of this Wilga 1 prototype took place on 24 April 1962 with the single aircraft SP-PAZ. There was probably no great satisfaction in terms of flight performance, the machine was too heavy. Then there were other shortcomings such as the lack of rear visibility, which for glider towing is still very unfavorable. Since even the Luftwaffe from Indonesia for an improved machine filed interest, began quickly at PZL with a redesign of the aircraft type. The changes were so profound that even possible to speak of a new design. Were responsible for the construction at the factory PZL Warszawa-Okecie engineers Andrzej Frydrychewicz, Wojciech Gadomski and Andrzej Kardymowicz.
The PZL-104 Wilga 2 shows especially in the trunk area a completely new design and design concept. The center fuselage section was manufactured in steel tube design with the Wilga so characteristic, like corrugated aluminum sheeting. Even the slim tapered tail boom has this typical for the Wilga planking.

Economical weight
By supporting outer skin could be dispensed with longitudinal straps and there were only a few shaping frames required. In this way could save a lot of weight and now by rigorously stripped rear fuselage and the rear roof glazing of course was also excellent rearward visibility. Together with the generous glazed side windows, this resulted in a wonderful panoramic view. The side doors folded on top and offered to the pilot and the Mitfliegern easy access to the four-seat cabin.
With the wing at the new Wilga 2 remained even the basic concept of the predecessor model. The solid slats now ranged over the entire span of the wing tip-surface linings. 2415-The NACA airfoil was retained, the einholmig executed wing but now fully planked with aluminum. Bends in the semicircular Beplankungsblechen with triangular cross-section and mounted in the construction of additional strength. In the area of ​​anti-torsion Torsionsnase reinforcing bars were still riveted on the planking. This design has some very rustic, however, brings a high degree of rigidity in the structure. Large flaps and ailerons extend over the trailing edge of the wing to the fuselage connection.
The tail almost identical construction characteristics as found on the wing. Beads in Beplankungsblech serve also to reinforce the structure. The fin has now swept back slightly in accordance with the prevailing trend. Now for the lower fuselage abgestrebte stabilizer kept the unswept rectangular plan.

Trailing
The exception of small struts for lower fuselage almost self-supporting and graceful acting chassis was also revised. The main suspension were now running towed. The legs were constructed uncovered. The engine was now the first PZL-104 Wilga 2-prototype a Polish Narkiewicz WN 6RB2 engine with an output of 180 hp. The maiden flight took place on 01 August 1963 instead. The version for the Indonesian military was equipped with a six-cylinder boxer engine American Continental O-470 and called himself now 16 copies of version C. Wilga Wilga C made especially for Indonesia.
One would have liked to have PZL the U.S. Continental O-470 engine manufactured under license. As it was, however, to no permits, there was another version of Wilga, execution Wilga 3 with the Soviet Ivchenko AI-14R engine, a nine-cylinder radial engine with an output of 260 hp. This drive to improve the already rustic look of the Polish oriole not exactly for the better. The cowling of the twin engines of the Wilga was better to face.
On 31 December 1965 flew the first radial engine version of the PZL-104 Wilga third As a club aircraft was the series name and 3A Wilga Wilga in the air ambulance version 3S. The medical version was beside the pilot take a doctor and two patients on stretchers. Visually, the difference Wilga 2 of the new version 3, not only by the radial engine cowling, but also by modifications to the horizontal stabilizer. The aerodynamic surface balancing the elevator has been changed to the plan shape and it came a little slats added to the compensation area.
With the Continental engine, the Wilga 3-execution then called Wilga 32nd She first flew in September 1967. In Indonesia, there was a small production license under the name of this pattern: Lipnur Gelatik 32nd The Gelatik 32 was however provided with the old horizontal stabilizer without slats in the rudder compensation area.

Diversity
The modified PZL-104 Wilga 35 with the radial engine was on 28 July 1967 for the first time taking a test flight. The cabin design has been modified and revised the chassis again. It was among other things a wider track. The legs are now provided with an aerodynamic fairing. Depending on the purpose, there was different interiors, these sub-variants were each given an additional letters behind the base-model designation. The version PZL-104 Wilga 35A had the version for the clubs that. Wilga 35H run with floats Wilga 35M called himself a test sample with the powerful 360 hp M-14P radial engine. The pure cruising variant called Wilga Wilga 35R and 35P was the model for the agricultural operations.
From 1979, especially one equipped by U.S. aviation regulations Wilga variant was offered. This Wilga 80 differs but look almost identical to the main export version Wilga 35th To recognize externally to the larger oil cooler fairing under the forward fuselage. The PZL 104 Wilga 35A was delivered in 1968 mainly in the former Eastern bloc countries. They were there mainly the glider towing, as a paratrooper Panning and pilot training. The main customers were mainly the various national sports federations defense. Here’s biggest customer was the Soviet union DOSAAF, there were about 350 copies of the Wilga exported. In this group, especially the young people were prepared for future military service, the flying was an integral part of this society. From Poland there were not only the Wilgas, but also some of the famous Polish SZD-Segeflugzeugtypen.

Awakenings
Even with the GST (Society for Sport and Technology) in the former GDR was one of the early 1970s to the strong short-starter (STOL performance) attention from Poland. In May 1971, the first nine PZL-104 Wilga 35A were delivered to East Germany. Until 1980, about 80 machines from being Society for Sport and Technology. The powerful Wilgas could be used for the sailor double or even triple tow. When towing of three sailors could nevertheless still a climb rate of 132 meters per minute can be achieved. In addition to the tow the Wilgas were also popularly used for various precision flight championships. Especially Polish teams were at this “World Rally Championship” with the Wilga for many years with great success.
The excellent multi-purpose properties, the excellent all-round visibility and the ability of the short takeoff Wilga 35 drew the interest of the People’s Police on this aircraft type. From 1982 two Wilgas served in the People’s Police for monitoring and surveillance flights. Initially only the conventional GST-painting, later in the familiar white and green of the national police. After the reunification of the former GST Wilgas entered the flier clubs in the new federal states, in part, then to West German clubs.

Millennium
Mid-1990s, there was again a development and refinement of the proven Wilga. When driving an American six-cylinder engine manufacturer Lycoming was selected with 300 hp. Thus, the PZL-104M Wilga 2000 regained a slim cowling as its predecessor from the 1960s. And again, the chassis has been modified and fitted with a larger, aerodynamically streamlined fairing. The glazing of the front and side windows also received an overhaul. The fin of the tail fin was extended almost to the rear window, got to the wingtips and tail wing of elegant shapes. Somewhat later came winglets on the wing it. After the first flight on 16 August 1996, there was indeed a serial production, the numbers were lower than expected.
In October 2001, the aircraft was factory PZL – Warszawa-Okecie taken over by large European group EADS. In 2006, EADS announced then that the Wilga-series are no longer being produced. The numbers were dwindling, the production had grown so simply too costly. After 40 years of production and more than 1,000 units had been built, the production of the Polish oriole was terminated. On 15 December 2006 then rolled the very last PZL-104M Wilga 2000 (serial number 23) in Warsaw from the band. 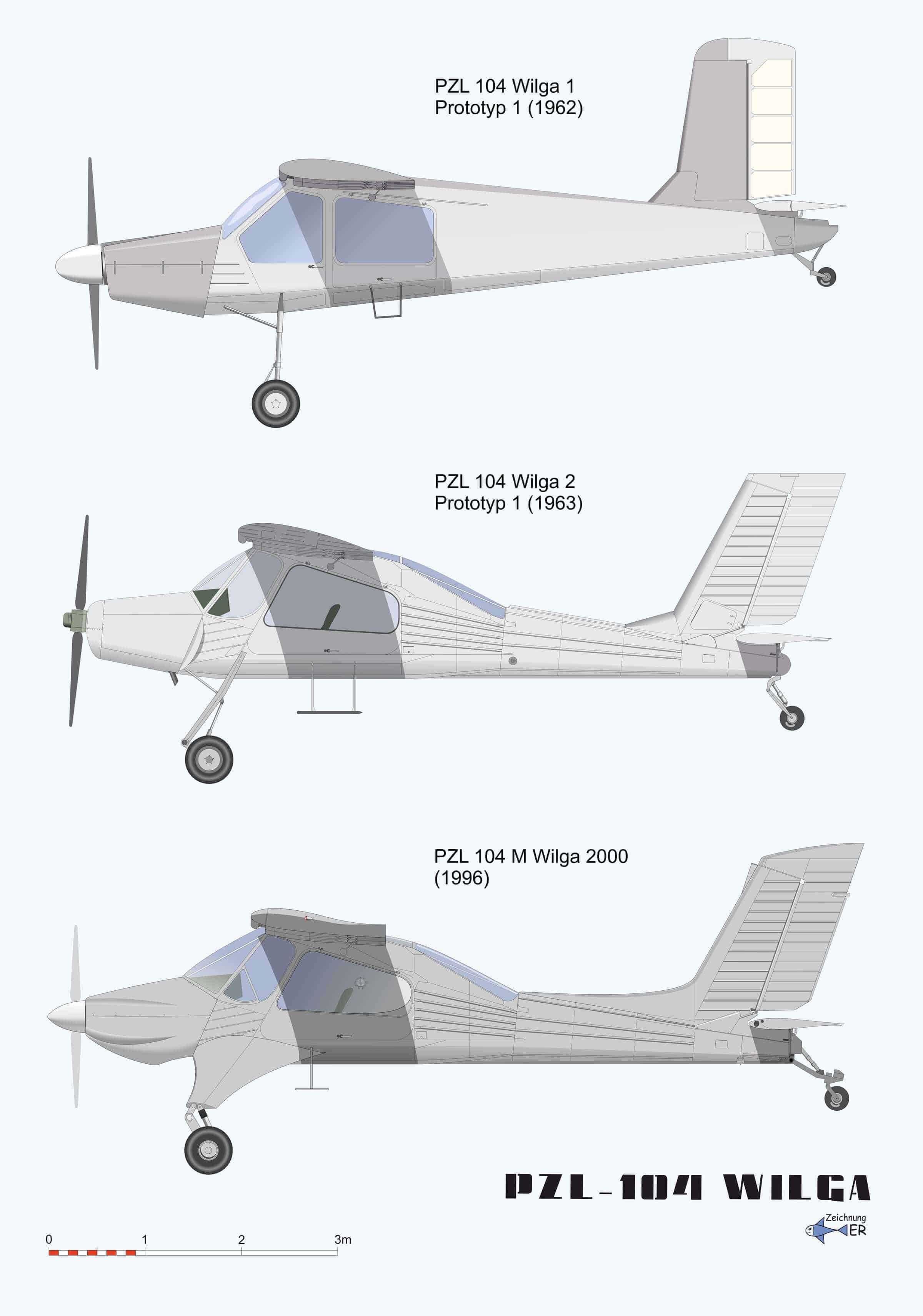 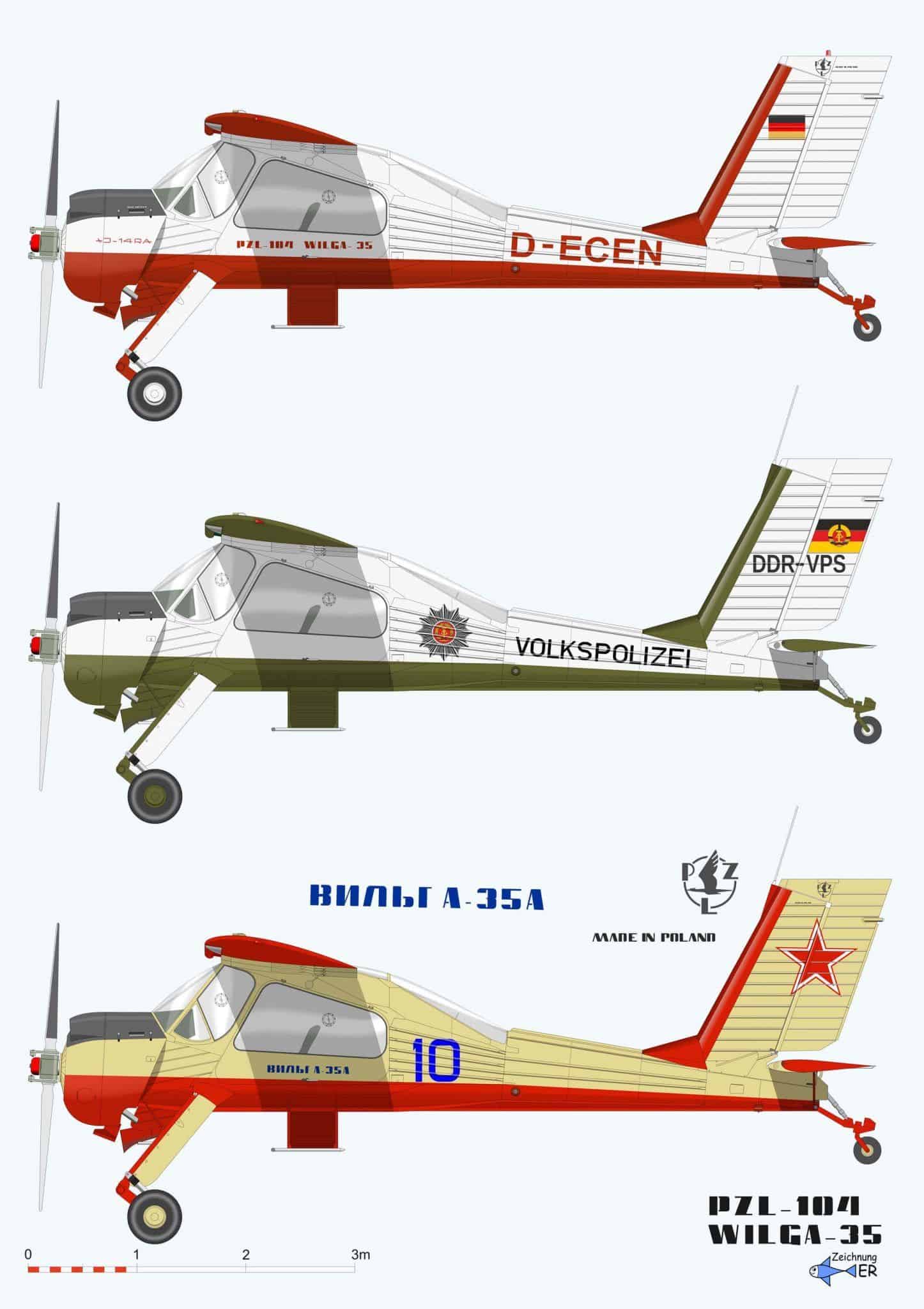 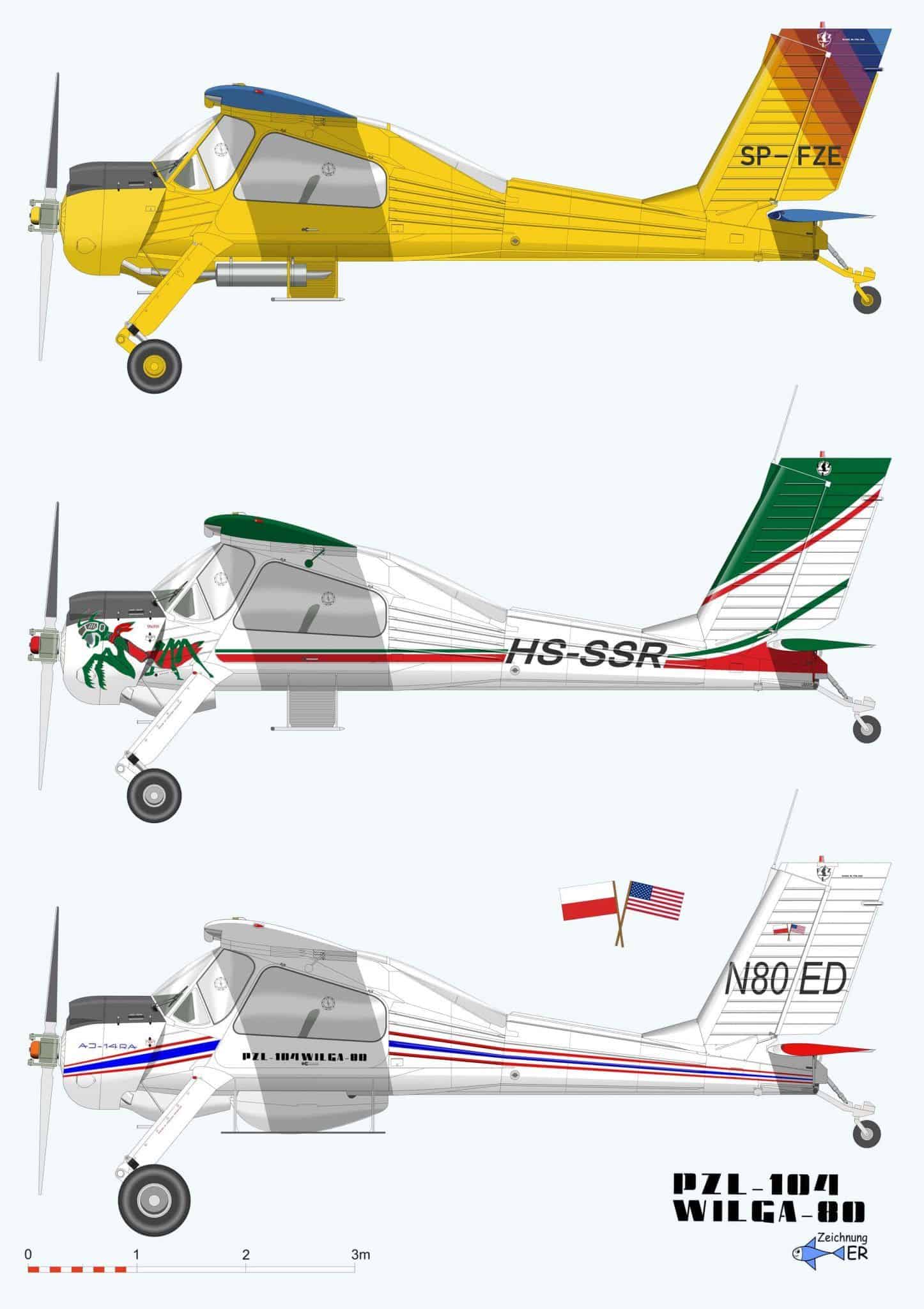