Making a Former to send to Vacuum Moulders

I can only comment on half of the process – the half that consists of making the former over which the canopy will be pulled – because I have always sent my stuff away for the tricky bit.

The principle is simple enough; you make up a solid object, the former, which is in the shape of the proposed canopy.What you make it out of, is really immaterial, and depends entirely on personal preference, and what tools you have available. You can, for instance, make it out of balsa which is physically easy to carve and sand – but can be a bit expensive in the larger sizes. I have made one in the past out of a large block of pine, attacking the shaping process with a variety of power tools until the thing submitted. This time, the finished result is rather heavy and the cost is reflected in the fee required by the Post Office to send it away and bring it back. There are two further considerations:

The surface finish: Obviously when the acetate is heated up and pulled over your work of art, any imperfections in the surface are liable to show up on the finished canopy.This means that you have to spend some time on surface preparation.Also to be considered is the effect of the heating process on the surface of the former – as balsa, for instance, is sometimes prone to bubbling under these circumstances. Probably the safest way to achieve the desired result is to glass-cloth the surface, rub it down carefully and prime and sand it down to 600 grit for the best results.

Make it oversize: It wouldn’t be much good making the former the same size as the cockpit aperture, as then there would be no space to cut away the excess – and still have enough canopy to fit! The first stage is to fill the aperture with your material of choice and then carve and sand it to the correct shape and profile. Removing it from the fuselage you can now add an inch or so around the base and the back to give you room to manoeuvre

One thing that I have heard of, but not tried myself, is to make up a rough former, pull a final canopy from it, fill it with something like Plaster of Paris, sand this down to a smooth finish and then from this pull your canopy.This is, I believe, what they do at the Vac-forming works with formers of poor quality, but of course it all adds to the cost. Who do I use! Well, I’m sure they wouldn’t mind me mentioning their name: Contact:

Making a Former and DIY Vac-Forming

by Dave Smith from Canada 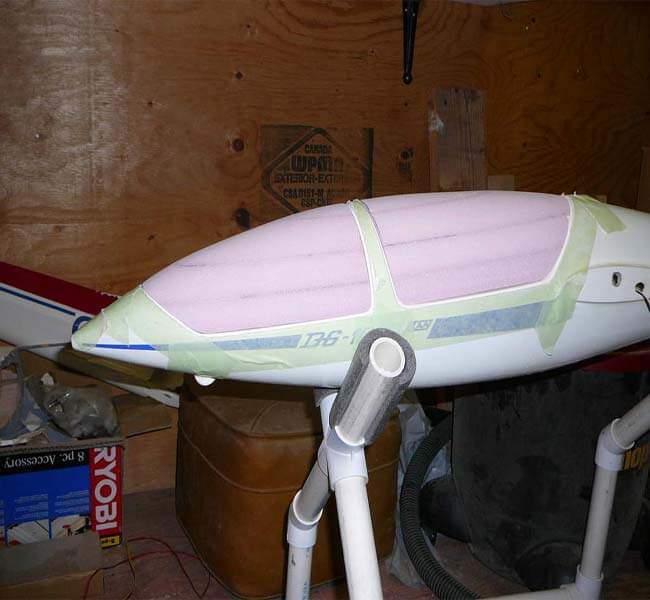 I originally was going to carve a wooden block to shape, but,

I couldn’t get a decent sized hunk of balsa locally;
there are two canopies, and carving a wood plug is a bunch of work; and,
I had always wanted to try to make a plug out of styrofoam and see how it would stand up to the pulling process.

Here are the results.
Stack up and glue some pink styrofoam to get the depth you need, (I used Elmer’s foam-safe spray adhesive), and roughly fit to the canopy openings 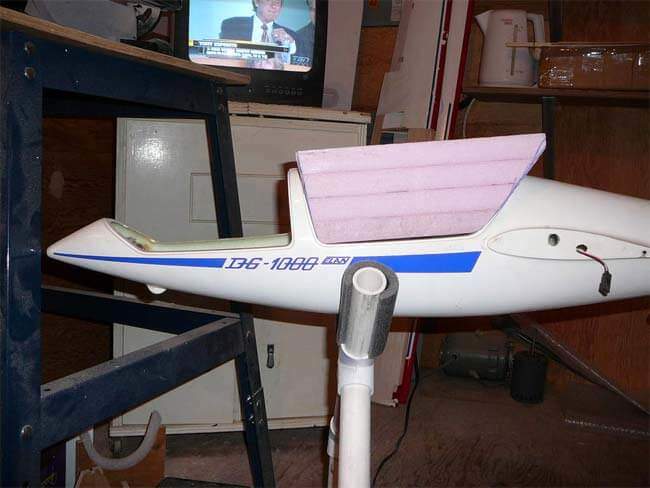 Protect the fuselage sides with some masking tape and using a rasp and 80 grit, form the canopy plugs to shape 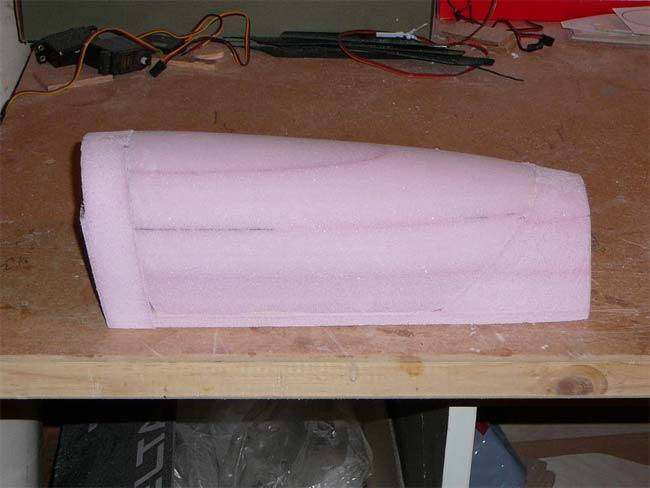 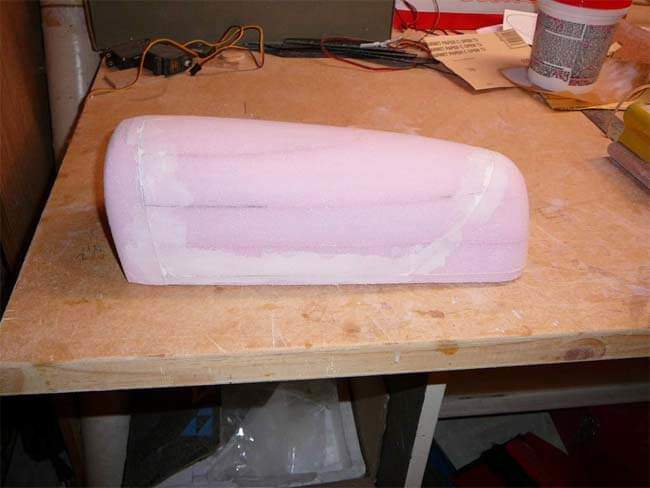 Add a layer of medium glass with finishing resin ( I used Z-Poxy, Sig also has a great reputation), and then a flow coat over that
Sand smooth with 80 grit, then some auto body putty to fill in the bumps and sand again with finer grit until you have a smooth form 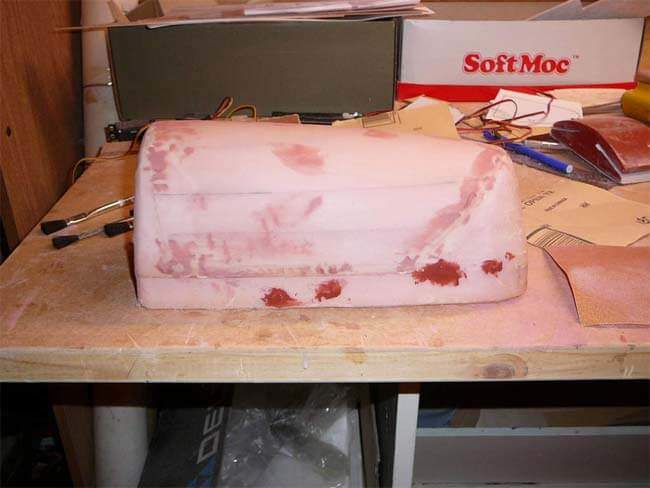 Here it is sitting on my vacuum box. The frame is made out of corner bead from the building store, and there is a layer of self-sticking door/window sealant strip on the box so that when the frame is lowered over the box, it seals against the strip< 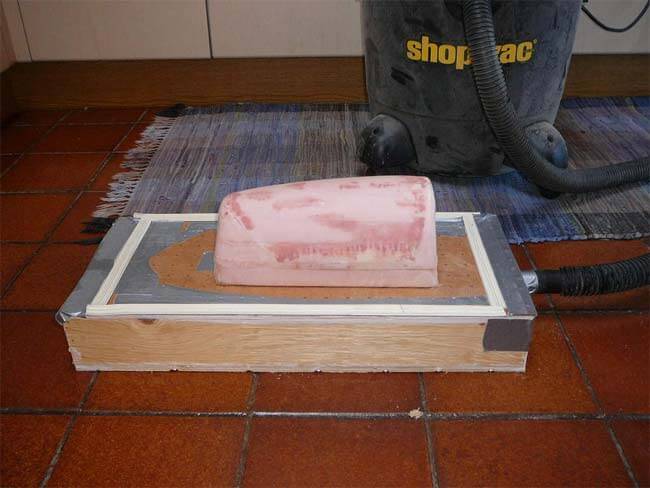 The plastic under the broiler. This is .040 PETG, and it is not quite ready to take out; it will sag another inch or so before I take it out and press it over the plug. The thing is, once it starts to melt like this it goes pretty fast, so put down the camera, don’t forget to turn on the vacuum, put on the oven mitts and get moving! 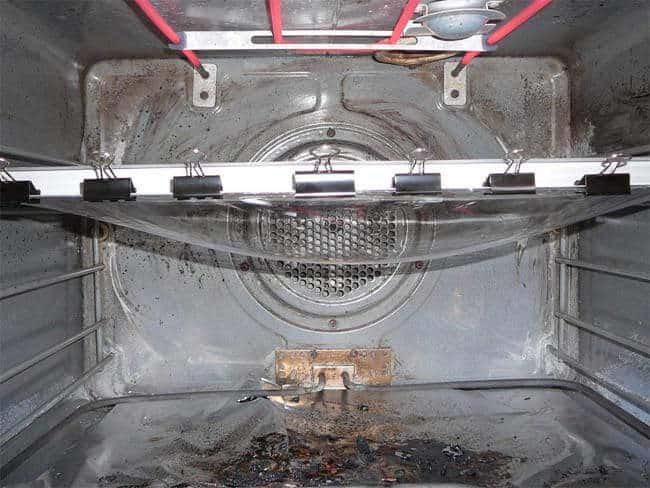 style=”text-align: center;”>Pull down over the plug. You can see that I’ve used office clips to hold the plastic to the frame. The first time I did this I was concerned that they wouldn’t grab tightly enough, but they do 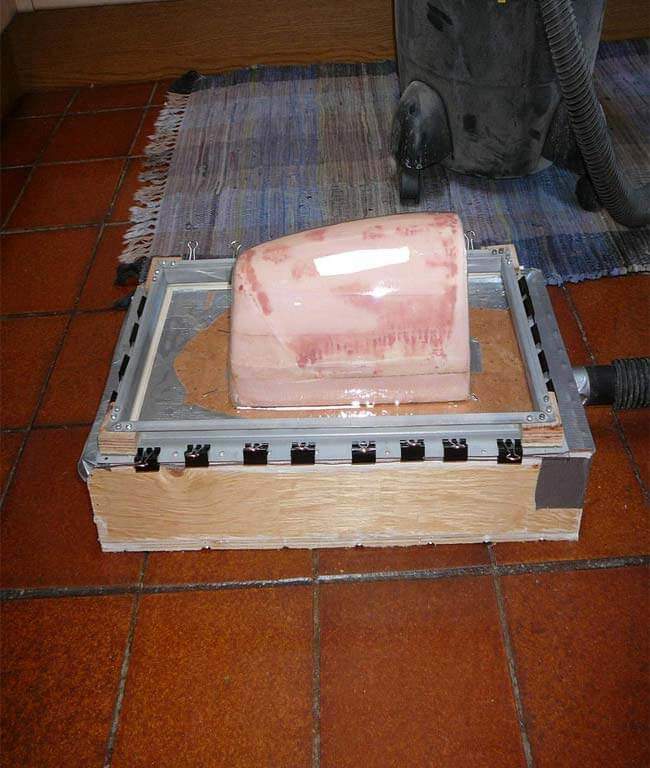 Here’s the trick….once you have pulled the first canopy, take it off the plug and check it for shape, etc. What you will probably find is that some of the weave from the glass cloth on the plug is pressed into the plastic. Now trim this canopy so that it just covers the plug. You are now going to pull a second canopy over the first. The surface of the first pull is smooth; smoother than you can make your plug without a huge amount of effort.

The end result. The front canopy is very good; just dusty in this picture as I didn’t clean it after sanding the edge and the flash caught it. I’m not happy with the rear canopy and will pull another. I think I was slow getting it on the plug and it is pretty wavy, but if the front one is any indication, I should be able to duplicate the quality on the rear one 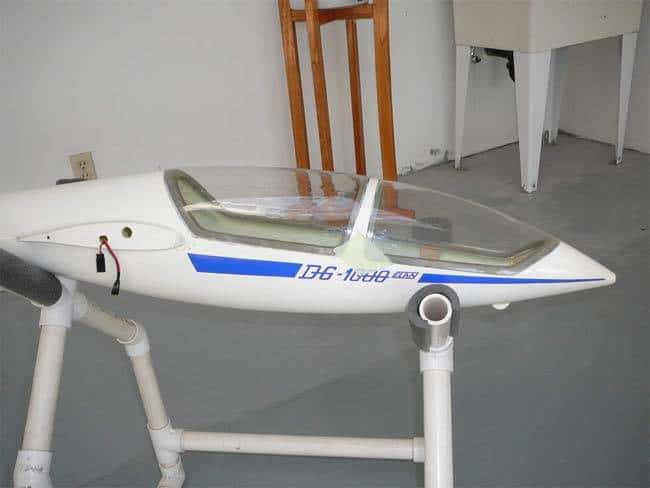 So what I found was that I could make plugs relatively quickly and painlessly using pink foam, and they stood up to the pulling process. It isn’t heat that is the problem, as the plug is never in the oven and the heat from the plastic dissipates very quickly. I was more concerned with the foam deforming, but the glass skin forms an arc and adds a huge amount of strength.

I didn’t spend as much time on the plugs as I did on the one for my SF-27; all I was trying to do was make some replacement canopies and get back in the air. This isn’t my scale pride and joy, but it is a fun plane to fly and shouldn’t be sitting in the shop just because it doesn’t have a canopy!