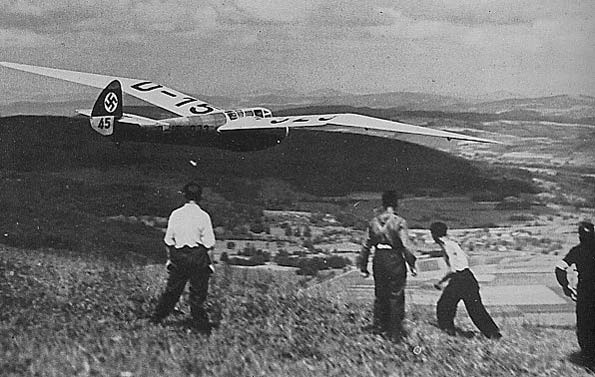 Launching at the Rhön Competition in 1937

This little known version of what must be the most elegant of all old-time gliders, the Minimoa, w

as built by the Schempp-Hirth Factory and designed by Dr Wenk and Eng. Faber and overseen by the famous glider pilot, Wolf Hirth. It was to be a two-seat trainer version of the Minimoa and intended for series production starting with an initial order of three, but in the end, only one example

was to have been built. Minimoa’s were known for their stable straight flight but the extreme gull is known to require a lot of heavy aileron input to produce roll and could not compare with the flight characteristics of today’s gliders. The Minimoa tended to be a bit hairy in violent gusty conditions.

It was conceived in 1935 at a time when there were very few two-seaters in existence. From its very inception, the standard single-seat Minimoa had been designed with the possibility of creating a two-seat version. In Flugsport of 21st August 1935, there is a note which states “Based on a payload of 150kg the wing can also be used for a 2 seater fuselage, which is still to be designed.” 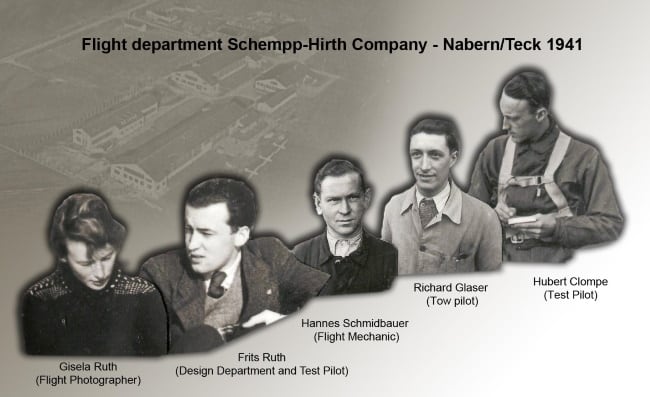 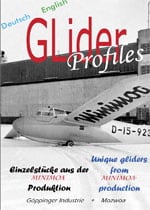 Hirth thought that stability when thermalling, especially in cloud, would be greatly advantageous, hence the exaggerated gull wing of the Minimoa. This also gave considerable wing-tip clearance. This was a very attractive feature as virtually all gliding sites were on hills, often covered in deep heather which could catch the tip and cause a damaging ground loop. The main spar of the glider was constructed in one piece as a normal straight tapered beam before being steam-bent at the gull break to create the famous wing shape.

Schempp-Hirth worked hard to meet the deadline for the Rhön Competition of 1937. It was designated with a works serial number of 150 and registered as D-15-923. At the Rhön event, it was given the nickname of “Mozwoa” according to one magazine of the time. 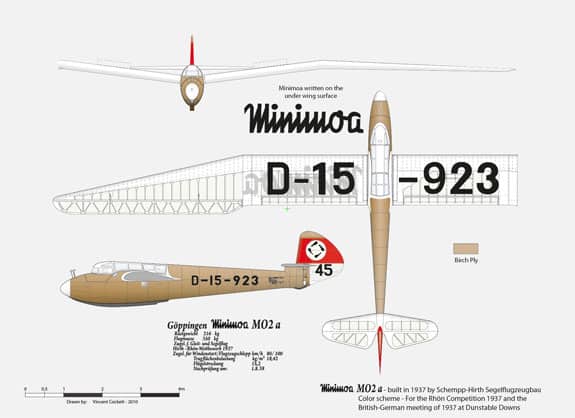 The changes from the standard Minimoa were as follows :

(1) The fuselage was built 360mm longer than the single seat version, the extra length being added to the nose section ahead of the leading edge of the wing. The image below shows the two versions of the Minimoa for comparison with the fuselage extension in red. 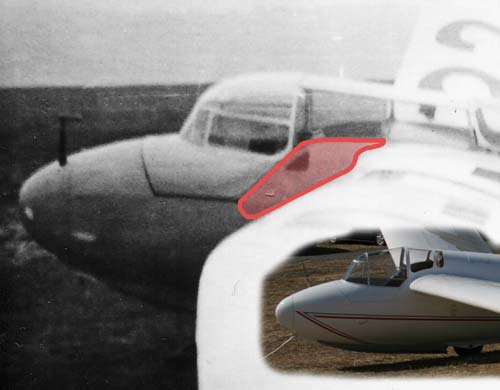 (2) Access to the second seat was over the wing through a removable canopy to a seat mounted between the main spar and rear sub-spar. Also to be seen in this picture is the clear vision panel or direct vision panels similar to more modern gliders using siding panel with clear Perspex frame/runners– always on the port side so you can look out in case the cockpit gets iced up or steamed up. The one in the front windscreen was a hinged panel type. 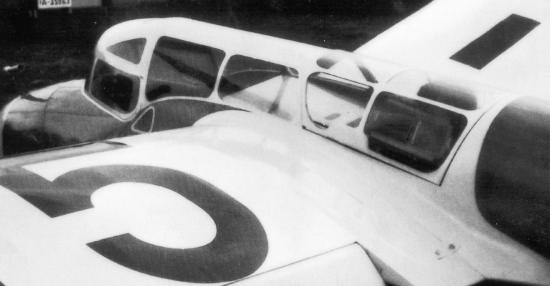 (3) Due to lack of height in the second seat, the usual case Schempp-Hirth wheel had to be abandoned and launching would be by a dropable dolly wheel beneath the skid. You will note in the picture below how the skid flexes. This is a symptom of poor design as the skid is supported either side of this point. From the experiences of take offs using a Dolly, Paul Williams reports that ” On take off there is a real danger of the skid flexing sufficiently to force the release mechanism open, so the dolly releases early. The dolly then slams between ground and skid making an alarming noise whilst one heaves back on the stick to get some height before the dolly makes a large hole in the rear fuselage or removes the tailplane. 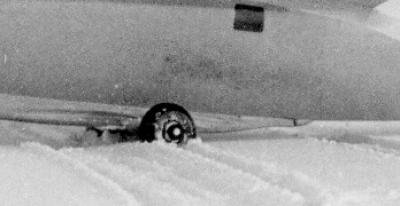 (4) The rear pilot had limited downward vision because of his view being obstructed by the wings. To overcome this, two small square windows were cut into the side of the fuselage underneath the wing. 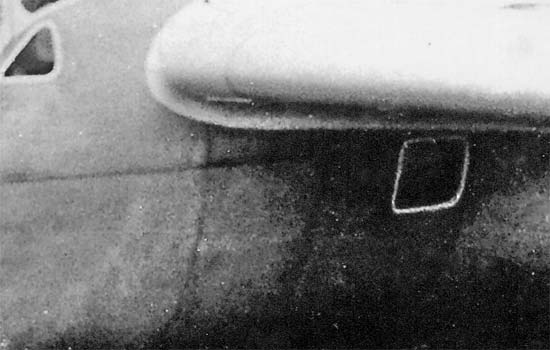 (5) Wing flaps were installed on the inboard wing.

(6) A nose light was installed similar to the prototype Kranich and possibly the Gottingen IV. The idea seems to be to help with an unintended landing when slope soaring through the night for attempted duration records. In reality rows of car headlights were used until duration records were no longer recognised as several deaths had been caused by exhaustion

Extra reinforcement of the fuselage, wings and tail was not considered necessary for the conversion of the standard Minimoa. 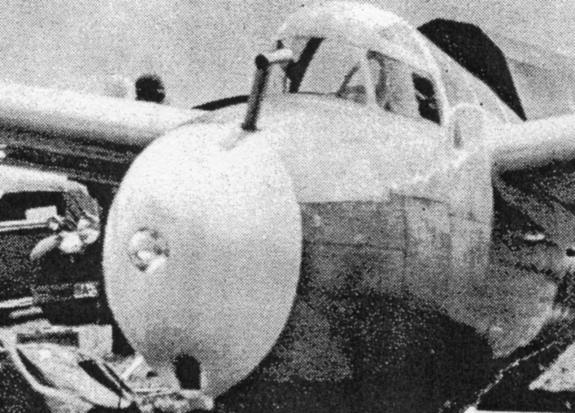 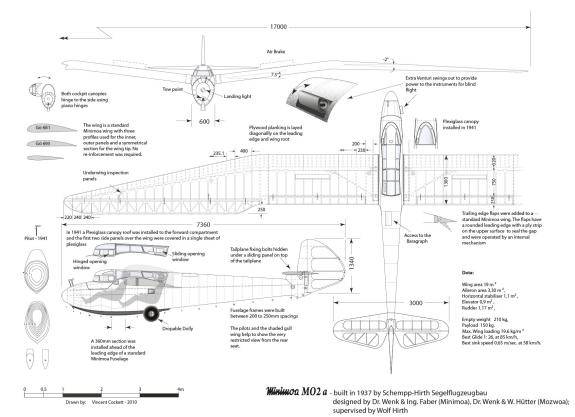 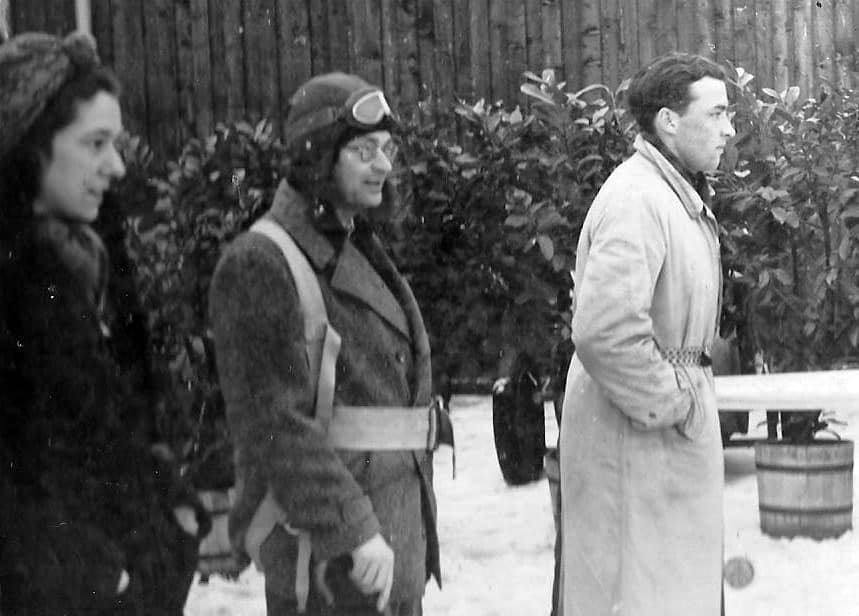 Frits Ruth, in the right of this picture, was one of the engineers of the time working with with Wolf Hirth (centre) and made the following report following on the air test:-

I worked at the Wolf Hirth company at. Nabern-Teck in the design office and I was. was also made part of the existing five man Test Flight Facility, where about once a week we flew new and repaired planes for testing

On the 6th December 1941 Hubert Clompe, one of the test pilots, made the first solo flight with the Minimoa-doubleseater and again flew on the 10th December when I was in the back seat. In strong, gusty, westerly wind, we were towed by Richard Glaser in the low powered Klemm 25 near the west mountain slope of the Teck-Mountain. Still below the mountain top and very close to the timber forested slope, we snapped the tow cable and the airplane immediately put its nose steeply downwards. I first thought that the tow plane had dragged us down. On the contrary, Clompe strained with all of his strength until he shouted for me to help him and get more power on the stick, but this did not work. As the tree tops became menacingly close Clompe pulled the tow release and we would shoot off in a sharp right turn from the slope.

The tow rope was torn from the coupling on the tow plane and fell into the treetops. The search the next day for it was unsuccessful.

In November / December 1941, the glider was returned to the Wolf Hirth factory at Nabem-Teck for reconditioning. The glider was repainted and had a clear Plexiglass canopy roof fitted to the forward canopy section. 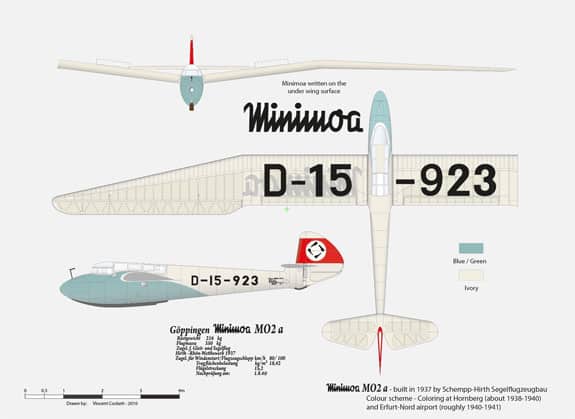 For the Rhön Competition, the pilots for the doubles competition were named as Wolf Hirth and Richard Knoth and the competition number “45” was allocated. However, only one start was made on the opening day as severe pain in the leg of Wolf Hirth forced him to abandon further participation in the competition. 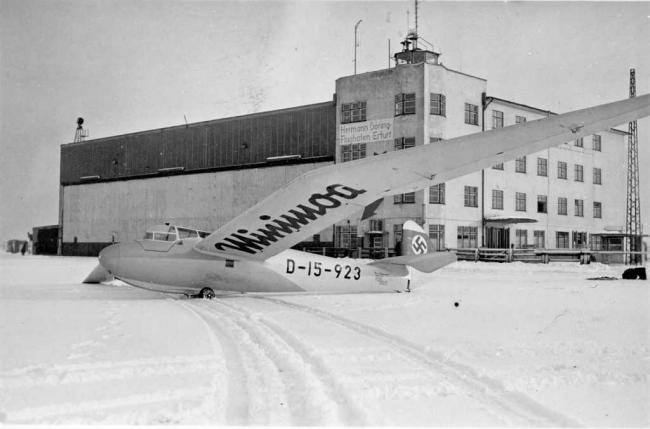 The Mozwoa in 1941, sporting its new colour scheme at Erfurt ,
however it still kept its contest number on the rudder for some time as can be seen bellow. 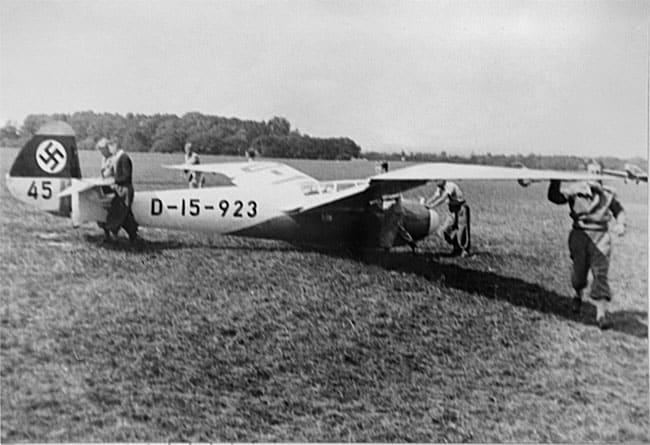 The visit to Britain 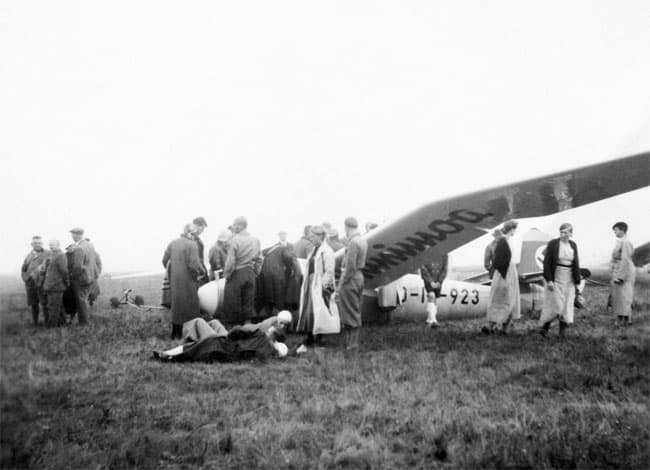 The Mo2a on show to the British at Dunstable
photo: Chris Wills

On August 29th 1937, almost three weeks later Wolf Hirth towed the Mo 2a, piloted by Eva Schmidt, from the Wasserkuppe to Dunstable for the English National Gliding Championships with a Klemm L25 d VII R training plane, registered D-ENHE, which was equipped with a Hirth HM 60 R engine (80 PS). At this event, the female crew of Hanna Reitsch and Eva Schmidt took part in the Championships. Wolf Hirths’ plan was to sell the Mo 2a in England, however his plan was to fail because of the resistance of the German Air Ministry (RLM) to provide an export licence. 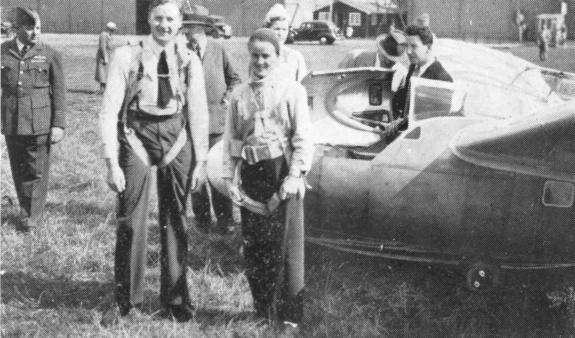 Flt. Lieu. Murray with Eva Schmidt and below Eva at Camphill. 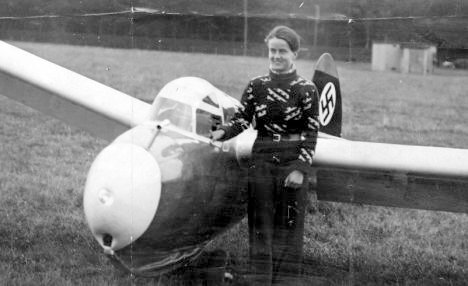 After Dunstable, the German group moved on to Camphill by road, whilst the “Mozwoa” was aero towed to overhead Camphill where it was released and landed normally diagonally towards the windsock.

The Klemm, with two up and flown by Eva Schmidt, also landed normally on a south-west runway that passed between the hangar and the first stone pile halfway to the windsock. Unfortunately, the Klemm struck a wall root between the hanger and the stone pile and finished up facing back towards the northwest. The damage was mostly woodwork around the port undercarriage leg and the underside of the main spar where it joined the leg.

The Klemm was taken into the workshop where 4 or 5 Germans worked hard over two days to repair the damage after which the “Mozwoa” returned to Germany, again under tow. A record of the visit is shown in the video below and narrated by Chris Wills.

is usually proclaimed as the most famous German woman glider pilot and a fervant propagandist for the Third Reich, Eva Schmidt actually achieved more sport records and received far more awards, but sadly she is forgotten in her native country, Germany.

She was trained in aerobatics and parachuting in Rangsdorf  near Berlin and in September 1935, she became the third woman in the world to be awarded the glider badge. From 1937, she worked for the Bücker factory as an engineer and in June of that year she set the world record for a gliding distance flight for women and a flight duration record of 14 hours.

She moved to East Prussia just before the end of WWII where in 1945, just before the Soviet Army were able to “liberate” that part of Germany , she took her own life along with those of her children. She was only 31. 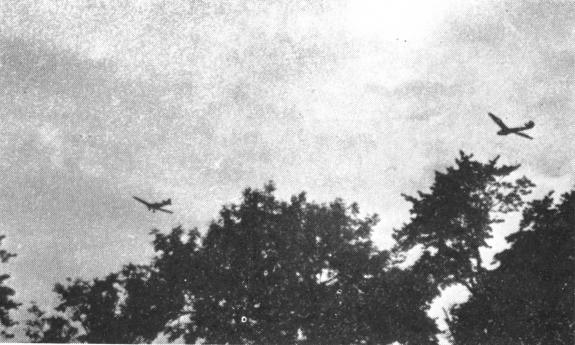 The Mo2a leaving Camphill on its return to Germany

style=”color: #336699;”>Further reading from the Sailplane Magazine, Sep. 1937 about the sales trip to England

The Mo2a was also taken on sales tours to Holland and Belgium, but by the end of of 1937, it was reported in the American “Soaring” magazine that “No production is planned for the Minimoa 2a, the two-seater which first appeared at the Eighteenth Rhoen Contest” 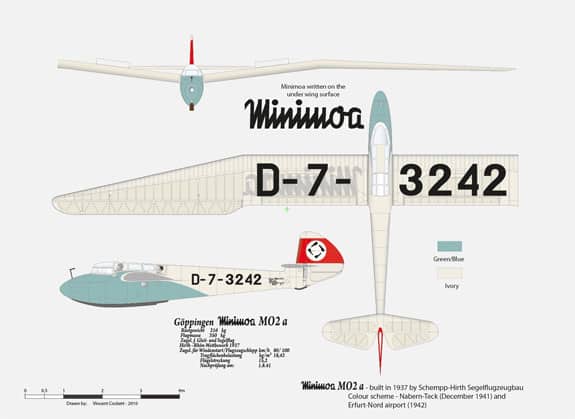 The glider, now re-registered as D-7-3242, was used in 1942/43 as a trainer by the NSFK Group 8 (Mitte) Standarte 43 (Weimar) but flew with a marking of the Group 7 (Elbe-Saale) from Erfurt/Nord airfield, where it was based. On the 8th August 1942 a note was entered in the flight log of Gerhard Stauch about a winch launch of a flight instructor in the Mo 2a.

It was never recorded whether the glider ever left the airfield and its’ final demise is as yet unknown. 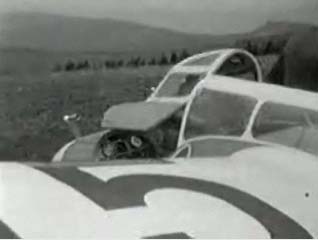 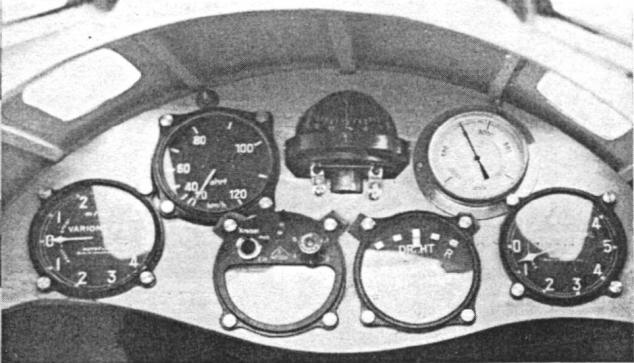 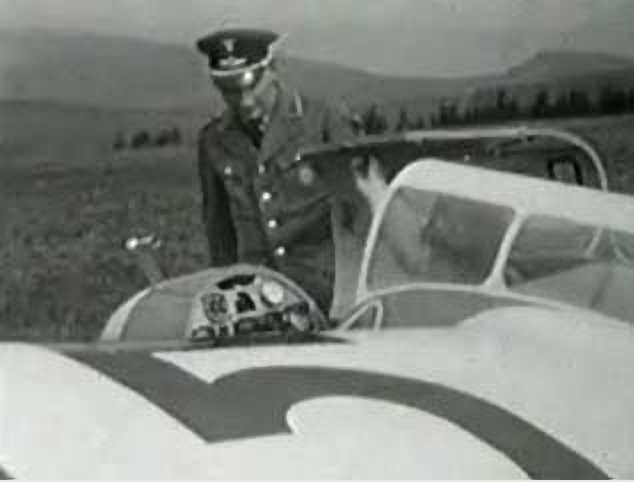 Zip file featuring all the pictures on this page